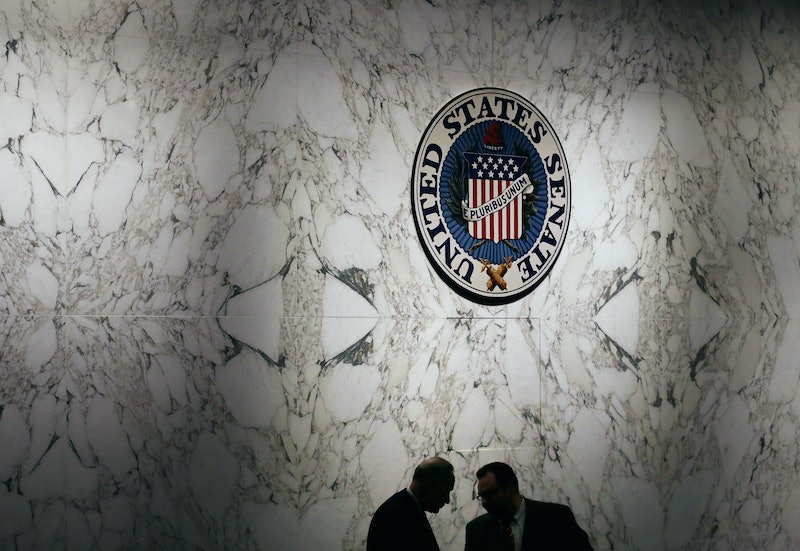 After going through several iterations of a health care bill and finding out they wouldn't have the votes to fully repeal Obamacare, Senate Republicans are now looking at a "skinny" repeal. The term might seem descriptive on its face, but exactly what does a skinny repeal mean? If it goes through, Americans could still be facing a loss — or at least a change — in their health insurance coverage.

A skinny repeal, unlike a full repeal, would get rid of only certain parts of the Affordable Care Act. If the Better Care Reconciliation Act fails to pass the Senate — which is likely — senators would then move on to voting on several different amendments, all of which would repeal certain aspects of Obamacare.

According to The Washington Post, who spoke to lobbyists and aides in the Senate, a skinny repeal (if the amendments were all passed) would get rid of the mandates that require individual people to buy plans as well as employers with 50 or more employees offer health insurance coverage — the mandate stipulates penalties under those two requirements. A skinny repeal could also eliminate the tax that is put on manufacturers who make medical devices.

Republicans have wanted to repeal Obamacare since it was first signed into law by President Obama, but their efforts have failed over and over again. The closest they got was in early 2016 when it made it all the way to Obama's desk, where he swiftly vetoed it. "Republicans in the Congress have attempted to repeal or undermine the Affordable Care Act over 50 times," Obama said at the time.

Rather than refighting old political battles by once again voting to repeal basic protections that provide security for the middle class, Members of Congress should be working together to grow the economy, strengthen middle-class families, and create new jobs.

Now that a Republican president is in the Oval Office, the GOP has been pushing hard to finally get rid of Obamacare, but their attempts have continued to fail. The House's health care bill made it through, but the Senate has been unable to come to a consensus.