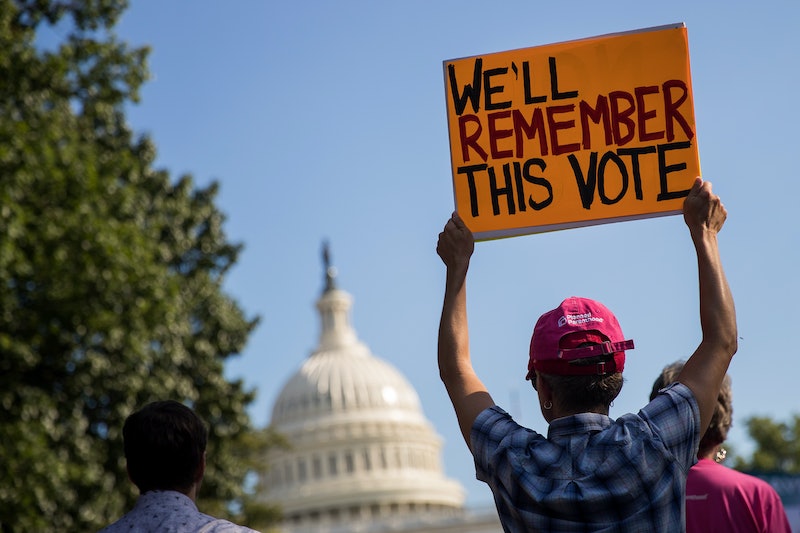 Senators haven't been very happy with the various Obamacare repeal efforts thus far. Even Republicans are voting against the repeal plans at margins once considered unimaginable. Now, though, each and every senator has a chance to make his or her mark on the bill. What is a vote-a-rama? It's when the Senate admits open amendments on a bill. That means there can be back-to-back votes for hours, each offering changes to the bill, in this case to the Obamacare repeal.

Officially, there have to be 15 votes or more on a single bill in one day for it to be considered a vote-a-rama — a practice that first began in 1977, according to the Senate website. There have been 57 vote-a-ramas to date, with the largest number of amendments topping out at 44. The name "vote-a-rama," though, is more recent; Trent Lott of Mississippi coined the phrase in 1996.

According to Keith Hennessey, a former Senate staffer, this happens when the time given for debate on a bill ends. Debate can't continue, but consideration if combined with voting is just fine. All the senators are therefore given the option to propose an unlimited number of amendments. To keep things moving quickly, the timing is condensed to just 10 minutes and each side gets 30 seconds to speak on the matter. That keeps things moving.

But moving with potentially no finish line in sight. The vote-a-rama comes in tandem with the consideration of an Obamacare "skinny repeal." Senate Majority Leader Mitch McConnell is dead set on passing some sort of health care bill, but his GOP colleagues in the Senate have voted down both the repeal and replace plan put forward as well as the repeal-only bill.

So enter the "skinny repeal." It undoes the key parts of Obamacare like the individual mandate and part of the employer mandate. It also delays implementing the medical device tax and broadens "innovation waivers" that can be used by states to change Obamacare rules, like the essential health benefits that must be offered in a plan. The maximum amount of money you can keep in a health savings account would also increase.

There's no guarantee that will pass. There are a number of senators who have said they will not vote for the bill unless there's a guarantee it will not become law. The problem with that is if they do vote for it and the House votes on the same thing, it could head to the president's desk without the Senate getting another chance to vote on it.

"I'm not going to vote for a bill that is terrible policy and politics just to get something done," GOP Sen. Lindsey Graham said at a press conference.

Meanwhile Speaker Paul Ryan has promised that the House will go into a conference committee on the bill, trying to relieve fears of these senators, including Sens. John McCain, Ron Johnson, and Bill Cassidy. But his promise was too vague for McCain.

Whatever happens next on health care, be prepared for a long night.

More like this
Scotland's First Period Dignity Officer Has Sparked Backlash
By Darshita Goyal
7 Blogilates Weightless Arm Workouts That Bring The Burn
By Carolyn Steber
When Did Pilates Become So Popular Again?
By Elizabeth Narins
11 Upper Back Exercises That'll Help You Stand Upright
By Carolyn Steber
Get Even More From Bustle — Sign Up For The Newsletter