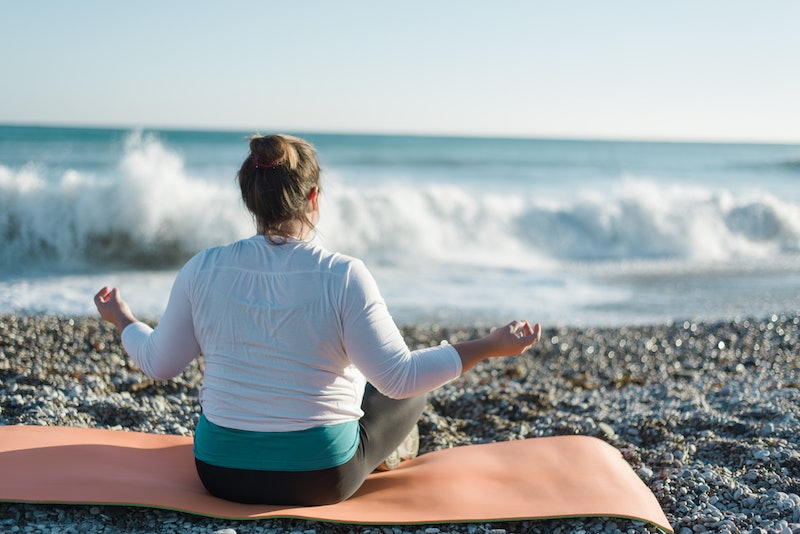 If you're curious about practicing meditation, you've likely heard a lot about mindfulness, which is often touted for its mind-body benefits— but contrary to popular belief, it's not the only meditation practice there is. While the scientific community has focused on mindfulness for many of its studies on the benefits of meditation, analytic meditation takes a different approach.

"The Dalai Lama practises analytic meditation, a kind of meditation which has received almost no attention in the Western scientific literature," Dr. Richard Davidson, William James and Vilas professor of psychology and psychiatry at the University of Wisconsin–Madison and the founder of the Center for Healthy Minds, tells Bustle.

Analytic meditation, experts tell Bustle, incorporates elements of mindfulness, but is its own particular practice. Mindful meditation involves focusing on a particular thing — often the breath — to center attention on the immediate environment. Tenzin Norbu, the author of Ocean of Compassion and former philosophy professor, writes for HuffPost that analytic meditation uses mindfulness techniques to help focus. "One cannot effectively engage in the practices of analytic ... meditation with an agitated or distracted state of mind," he writes. However, the core of analytic meditation isn't about attention; it's about reasoning.

"Analytic meditation uses reasoning to gain insight into how the mind works and particularly the nature of the way the mind constructs our selves as an entity," Davidson tells Bustle. "By using reason and probing in this way, we can come to an experiential realization of the ephemeral, constructed nature of the self."

In cognitive behavioral therapy, people are encouraged to examine their thoughts and beliefs about themselves, and how they influence their behavior — and challenge beliefs that are irrational or unsupported by the evidence. Analytic meditation strives to use logic and reasoning to influence behavior by doing a similar sort of examination.

Analytic meditation is also used to help understand the roots of your emotions and look at how they affect those around you. The Dalai Lama himself noted in a speech in 2017, "While the midst of anger, your tendency is to perceive the person who harmed you as 100% bad. But deeper analysis will make you realize that every human being is composed of both positive and negative characteristics, and you can try to get a more realistic view of the person, thereby diluting the anger harboured against the person."

Analytic meditation in the Buddhist tradition is thought to be most effective in people who have reached a certain stage in their search for enlightenment. However, Davidson thinks that if you aren't Buddhist or spiritual, that shouldn't stand in the way of your practicing analytic meditation.

"There are secular forms of it that could easily be implemented," he tells Bustle. "It may very much be a guided system, or one you practice on your own."

"He wanted me to separate the problem or issue from everything else by placing it in a large, clear bubble," Gupta writes. "The problem was now directly in front of me, floating weightlessly. In my mind, I could rotate it, spin it or flip it upside-down. It was an exercise to develop hyper-focus. Less intuitively, as the bubble was rising, it was also disentangling itself from any other attachments, such as subjective emotional considerations."

Next time you're struggling with an issue or an emotional problem, it may be worth putting the Dalai Lama's suggestions into practice and attempting some analytic meditation, with some mindfulness first to clear your mind.