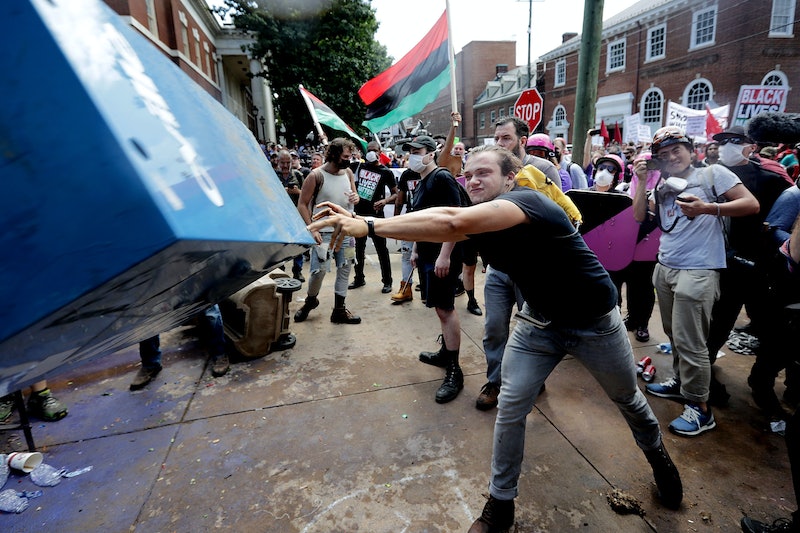 The situation unfolding in Charlottesville, Virginia, has shown just how divided America really is as a country. Photographs of white supremacists throwing up neo-Nazi signs and waving confederate flags while calling for the return of slavery will haunt this nation for years to come. But, the situation in Charlottesville has also brought to another group to the spotlight: Antifa. What is Antifa, though?

According to BBC News, "Antifa" is literally short for "anti-fascists," a group that — as the name suggests — staunchly opposes fascist principles, and has been heavily anti-Trump since his election. They're considered far-left, essentially making Antifa and the alt-right "the extreme ends of the political spectrum." The group reportedly began sometime in 1930s Europe, particularly in countries that saw the explosive rise of fascist regimes, such as Italy (Mussolini) and Germany (Hitler). It continued to grow throughout the second World War, but lost ground after that.

As BBC News reported, the Antifa movement fights back against racism, confronts those thought to be white supremacists, and, as the name suggests, opposes fascism. The movement "wasted little time in making its presence felt" during Donald Trump's inauguration in Jan. 2017 when protests turned violent:

Restaurant windows were smashed, a car was set on fire and objects were thrown at the police. More than 200 arrests were made.

In their May/June 2017 issue, Mother Jones stated that the "violent anti-racist" Antifa movement, though largely underground in the past, was "poised to explode" in the Trump era. And, in their upcoming Sept. 2017 issue, The Atlantic followed Antifa protesters in Portland, OR protesting against neo-Nazism in April 2017, writing:

Since antifa is heavily composed of anarchists, its activists place little faith in the state, which they consider complicit in fascism and racism. They prefer direct action: They pressure venues to deny white supremacists space to meet. They pressure employers to fire them and landlords to evict them. And when people they deem racists and fascists manage to assemble, antifa’s partisans try to break up their gatherings, including by force.

Additionally, in his response to the events in Charlottesville, Trump seemed to denounce members of the Antifa movement more than he did any white supremacists — in fact, he refused to speak the term "white supremacist" at all, instead saying during a press conference, "We condemn in the strongest possible terms this egregious display of hatred, bigotry and violence on many sides — on many sides."

As for Antifa's role in the situation in Charlottesville on Aug. 12 — members of the group were in the city protesting the racist rallies, and both extremist groups from opposite ends of the political spectrum, Antifa and alt-right, were reported to have physically altercated with one another.

Following the clashes, a member of the alt-right drove a car through a group of counter-protesters on Saturday, injuring at least 19 and killing one. The driver was arrested and charged with one count of second-degree murder, "hit and run attended failure to stop with injury," and three counts of malicious wounding.