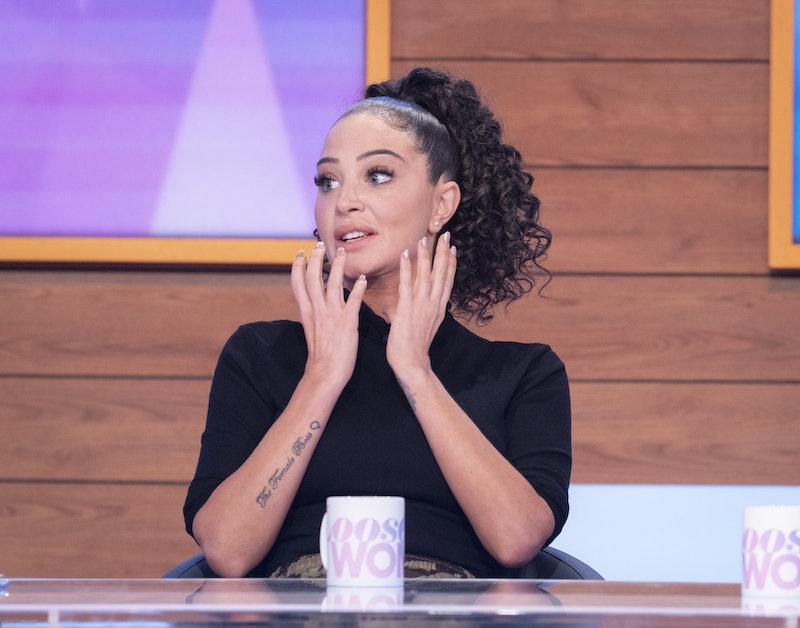 Tulisa Contostavlos has been outspoken in her support of those facing online abuse and has raised awareness of online trolling. But during an appearance on ITV's Loose Women on March 9, she spoke out about a specific type of abuse relating to a condition that she has been diagnosed with. But what is Bell's palsy? Contostavlos told panellists Andrea McLean, Linda Robson, Denise Welch, and Jane Moore that misconceptions around the condition have led trolls to make cruel remarks about her face. So if you're unfamiliar with the condition, here's what you need to know.

Per FacialPalsy.org Bell’s palsy occurs when there’s inflammation around the facial nerve. The pressure caused by this inflammation can cause facial paralysis on one side. It’s the most common severe condition involving only one nerve and is the most common cause of facial paralysis. During her Loose Women interview, Contostavlos explained: "I do suffer from Bell's palsy... it can cause facial paralysis, it can cause swelling. I think the first attack I had was after a serious horse-riding accident. I fractured my skull and it caused a lot of nerve damage."

Unfortunately, a lack of awareness about Bell's palsy can impact those dealing with the condition. It shares some symptoms with stroke, including drooping on one side of the face. Those those with Bell's palsy may also have a drooping eyelid or corner of the mouth, a dry mouth, loss of taste, or eye irritation, such as dryness or more tears, per the NHS. Shared symptoms can lead to the conditions being confused. This is something Contostavlos has experienced, saying during her interview: “I remember it was an ITV appearance a while ago and I saw an online comment like, 'Her face looks like she’s had a stroke,' and that can be the effects of Bell’s palsy.”

There’s no conclusive explanation for what causes the nerve inflammation that characterises Bell's palsy. According to FacialPalsy.org “links have been made with viruses (including herpes, influenza and respiratory tract infections), as well as a depleted immune system, and stress.” Bell’s palsy is rare in children, however, pregnant women in their third trimester or the weeks after giving birth are more at risk, says Mayo Clinic. Similarly if you already have a respiratory infection like the cold or flu or if you suffer from diabetes you can be at higher risk.

Most people make a full recovery from Bell's palsy within nine months, according to the NHS. However, not everyone's experience is the same and if nerve damage is more severe, facial weakness can be permanent. Contostavlos explained: “if you have steroids within a 72 hour period, it can last days instead of seven months, which happened to me the first time. I was hiding in the house."

The medication Contostavlos may have been referring to is a type of steroid called prednisolone which can be taken within three days of symptoms starting. The doctor may also prescribe eye drops or ointments to prevent dry eyes and surgical tape to ensure they stay closed at night

More like this
'Bridgerton's Regé-Jean Page Is The World’s Most Handsome Man
By Darshita Goyal
Turns Out George Clooney Is A Huge Fan Of This Classic British Game Show
By El Hunt
David Beckham’s Controversial Qatar Deal Skyrocketed His Net Worth
By Catharina Cheung
Rita Ora Finally Opened Up About Marrying Taika Waititi & Their "Perfect" Wedding
By Sophie McEvoy and Catharina Cheung
Get The Very Best Of Bustle/UK
Sign up for Bustle UK's twice-weekly newsletter, featuring the latest must-watch TV, moving personal stories, and expert advice on the hottest viral buys.