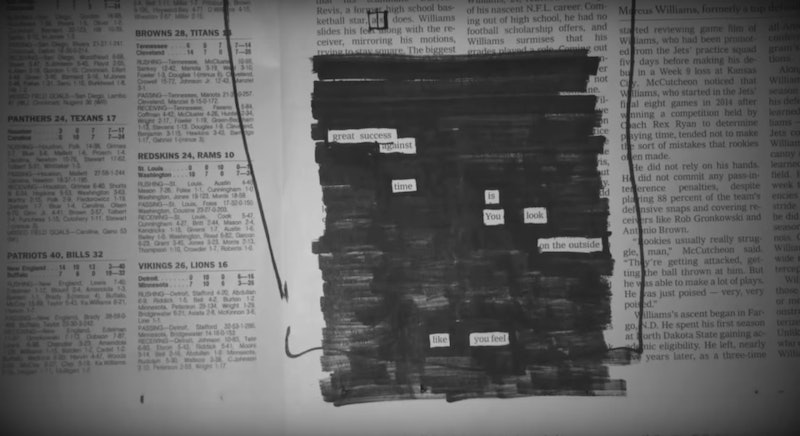 Chances are you’ve seen it before: a full page of text that looks like the world’s most hard-to-please editor went after it with a thick, black permanent marker, leaving only a smattering of visible words scattered across the page. Or, more simply put, something resembling a heavily-redacted document belonging to the United States government. Sound familiar? It’s called blackout poetry and it’s been popping up with ever-increasing frequency on Instagram and Snapchat, in traditionally-published poetry collections, and even as street art.

The basic premise behind blackout poetry — also sometimes referred to as found poetry or erasure poetry, though there are distinctions between the three — is that the poet takes a found document, traditionally a print newspaper, and crosses out a majority of the existing text, leaving visible only the words that comprise his or her poem; thereby revealing an entirely new work of literature birthed from an existing one. The striking imagery of the redacted text — eliminated via liberal use of a black marker (hence: “blackout” poetry) — and the remaining readable text work together to form a new piece of visual poetry. Pretty cool, right?

“It’s sort of like if the CIA did haiku,” writes Austin Kleon, the author and artist behind the Steal Like An Artist books and others, in a blog post titled: A Brief History of my Newspaper Blackout Poems. In addition to his 2010 book, Newspaper Blackout, Kleon shares his blackout poems on Instagram (@austinkleon) and Tumblr (@newspaperblackout) where he quickly learned that the central idea behind his art form was hardly new — though he’s credited with the current trend of newspaper-specific blackout poetry.

In a TEDxKC talk from 2012, Kleon traces the evolving history of blackout poetry back 250 years, to a man named Caleb Whiteford who published a broadsheet of found poetry and puns he’d collected from some of the first-ever print newspapers. According to Kleon's research, blackout poetry then made its way to a Parisian avant-garde poet named Tristan Tzara; a painter named Brion Gysin; American Beat writer William S. Burroughs; contemporary writer Tom Phillips, whose form of blackout poetry is called “humument"; and finally to Kleon himself, who began creating his own blackout poetry as a cure for writer's block.

In fact, the practice has become so popular, that the New York Times even got in on the action, creating a section of their digital newspaper where readers can create their own blackout poetry from New York Times articles, just by clicking.

But you might be wondering: what about plagiarism? It's a fair question, one that different writers have different answers for. After all, in composing blackout poetry, the poet is technically not writing — they’re erasing what somebody else has written. Robert Lee Brewer of Writer’s Digest argues that “if you’re not erasing more than 50% of the text, you’re not making enough critical decisions to create a new piece of art.” He also notes that crediting the original source is a must.

“Every new idea is just a remix or a mash-up of one or two previous ideas,” says Kleon, in his TEDx talk. His blackout poetry comes from what he refers to as a “genealogy of ideas.” Essentially one idea originating from another idea — not plagiarism, but artistic evolution.

Think you're ready to create your own blackout poetry? Here's what to keep in mind:

Oh yeah, and don’t forget to share your blackout poetry with the world! Use the hashtags #blackoutpoetry and #newspaperblackout to get started.