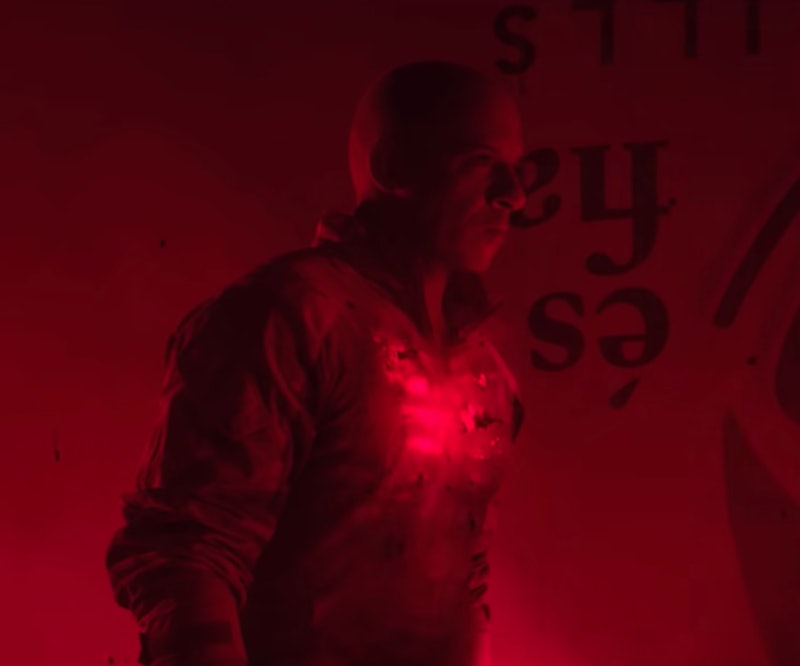 Fans headed out to catch Bloodshot on the big screen for the first time on March 13 may already be aware of the superhero's dark comic book origins. But for those who might be a little less familiar with the "biotech killing machine" known as Bloodshot, here's a little primer on who he is and what the comic Bloodshot is based on.

Bloodshot tells the story of a superhero named Bloodshot (Vin Diesel), a "biotech killing machine" sent to kill various high-risk targets all over the world. But Bloodshot wasn't always Bloodshot — he was formerly a Marine named Ray Garrison, who was assassinated, along with his wife. A mysterious organization revives him, pumps him full of nanotech to give him abilities (like being able to manipulate the shape of his body), and sends him off to do their bidding. The entire time, Ray — now Bloodshot — struggles with amnesia, unable to remember anything from his past life. But when those memories come trickling back, it makes his new life as a super-enhanced soldier much more complicated.

That struggle to remember his past life informs a lot of what Bloodshot does. It's a plot point taken straight from the comics, which the film mirrors fairly closely. Bloodshot is inspired by a series of comics off of the Valiant Comics label. The character first appeared in another Valiant comic, Eternal Warrior, in 1992. That appearance was little more than a passing cameo, however, as many consider his first full appearance to be in another comic, Rai, which made its debut just a week later.

Bloodshot is one of Valiant's tentpole characters, which is a fact not lost on Diesel, who has voiced his hopes that Bloodshot can kick off a Valiant Cinematic Universe. Speaking with Fanatic Association, Diesel said, "I think what this does is that it opens the door for all of them. I think you’re going to see all of them. I think if you’re a fan of Valiant Comics, then you are going to be delighted to hear — and I think they’re going to wait until the movie comes out — but they’re going to start putting out into the press all of the Valiant comic books that are going into the cinematic universe. It’s going to be very exciting."