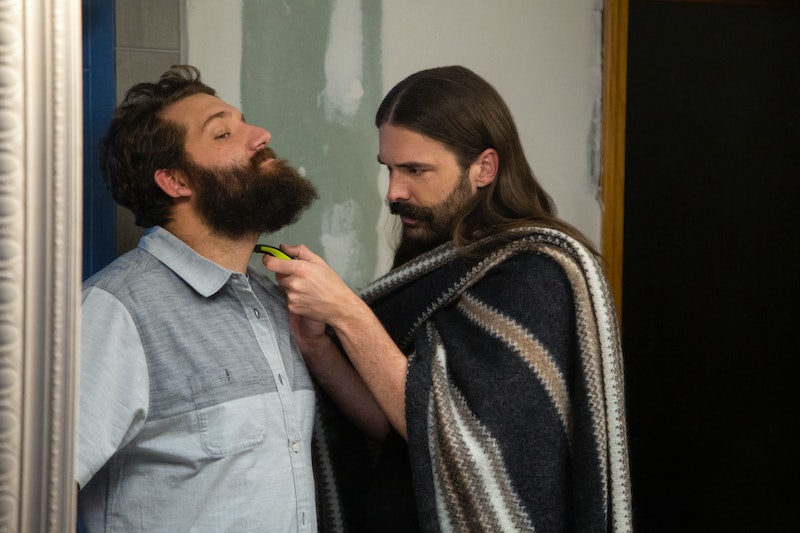 Unlike other heroes featured on the show, Brandonn from Queer Eye didn't end his episode with a drastic new look. Sure, he got a nice haircut and some Tan-approved outfits, but for Brandonn, the real makeover happened inside — inside of his house and his heart. After being medically discharged from the military at 21, he struggled to adjust to civilian life. He discovered newfound purpose after co-founding the Veterans Community Project, a non-profit organization that builds tiny homes for veterans, but it almost helped too much — he threw himself into work, letting quality time with family and a lengthy home improvement list slip to the bottom of his priority list. He was scared to open up about how he was feeling, so he closed himself off from the rest of the world. Eventually, though, the emotional distance became too much. And that's where Queer Eye came in.

"Queer Eye has really helped me to be able to kind of come out of my shell and not be judged," Brandonn tells Bustle. "I struggled a lot with being judged. [The show has] really been able to not only help me as a co-founder, but help me as a dad and a husband."

Karamo, who is a licensed social worker and psychotherapist, spent some time with Brandonn to help him break down the walls he'd built up from his past. He admitted he was afraid to be vulnerable, but was eventually able to find strength from it. "[The Fab Five] were like, 'Dude, we don't even talk to 40-year-olds that have so much life experience,'" Brandonn says. "And they're like, 'Nobody has the right to judge you. Not even yourself. You can't even judge yourself man, you just need to love life and not look back ... I think that was one of the biggest things that I took away. So I could literally let down my walls and my barriers and let people in. And I owed that to my family."

The experience has opened his eyes to the importance of reaching out and embracing others' support, and he hopes it does the same for people watching — especially his fellow veterans. "The Veterans Community Project and the Fab Five saved my life," he says, explaining that he's previously struggled with depression and suicidal ideation. "Being able to understand that people have my back and they're supporting me has been huge. And people need to know that ... If I could stop one veteran from committing suicide, or showing another veteran that they're not alone, you know, I think that's hopefully what my episode does for them ... A lot of us have these struggles. And if you need help, reach out to me. You know, reach out to any of us. We have each others' backs."

Now, Brandonn is enjoying his finished home renovations and more quality time with his wife and three kids. He says he's even coaching little league baseball and wrestling this year. Plus, he gifted his wife a super romantic present: a LoveBook. "Have you guys seen that on Facebook?" he asks. "It tells her the reasons why I love her. So that was really big, because I've never been able to really express that."

If you've seen how Brandonn started his episode, you know what a milestone that is, and it sounds like he's only continuing to become a better husband, father, and advocate.