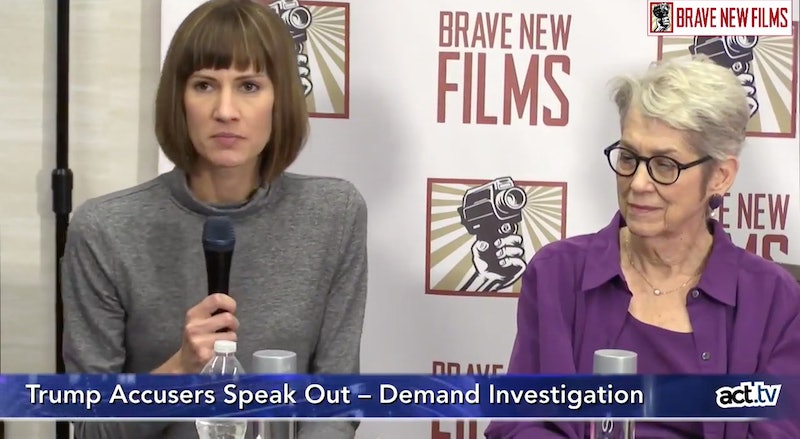 On Monday morning via Facebook, three of President Trump's accusers held a press conference with Brave New Films calling for Congress to investigate the commander-in-chief's alleged sexual misconduct. Trump has repeatedly denied all allegations against him, and the White House called his accusers liars. However, Brave New Films continues to give his accusers a voice.

The non-profit's website says its mission is "to champion social justice issues by using a model of media, education, and grassroots volunteer involvement that inspires, empowers, motivates and teaches civic participation and makes a difference." In November, the organization released a documentary about the women who have accused Trump of inappropriate sexual behavior called 16 Women and Donald Trump.

"We put together the stories of women who have reported being sexually harassed or sexually assaulted by Donald Trump," its website reads. "Seeing these women's stories, one after another, is incredibly powerful — it's time to listen and act accordingly."

As more members of Congress called for Sen. Al Franken and Rep. John Conyers to resign following allegations of sexual misconduct (which both congressmen did), Brave New Films called for the president to also be investigated in a Facebook post. On Monday, the non-profit organized a press conference with three of Trump's accusers to reiterate the calls for a Senate ethics probe.

Rachel Crooks, Samantha Holvey, and Jessica Leeds came forward with allegations of sexual harassment weeks before the 2016 election, and repeated their stories on TODAY Monday morning. Holvey alleged Trump "inspected" her and other contestants in the 2006 Miss USA pageant. Crooks claimed Trump forcibly kissed her outside an elevator in Trump Tower in 2005. Leeds claimed Trump groped her and put his hand up her skirt when they sat beside each other on a flight in the late '70s.

The White House responded in a statement Monday, calling their allegations "false claims" that have been "totally disputed in most cases by eyewitness accounts."

Trump's continuous denials and the fact that Americans elected him president are why the three women keep speaking out. "We are not holding our president accountable for what he is and who he is," Leeds said at Monday's press conference. She explained that she continues to speak out because she wants Trump to be held accountable:

None of us want this attention. None of us are comfortable with it.

The women explained that the #MeToo movement has highlighted how pervasive sexual harassment and assault are in the U.S. They felt inclined to speak out because they don't believe the man who allegedly harassed them should occupy the Oval Office.

"The only reason I am here today is because this offender is the president of the United States," Crooks said. "I want to believe that as Americans we can put aside our political inclinations and admit that some things in fact do transcend politics."

Brave New Films and Trump's accusers brought up ethics probes into members of Congress, including Sen. Franken, asking why the president hasn't also been investigated. Franken even called out the president when offering his resignation on the Senate floor last week:

There is some irony in the fact that I am leaving, while a man who has bragged on tape about his history of sexual assault sits in the Oval Office.

Crooks, Holvey, and Leeds want to see Trump held to a higher standard of decency. And, they argue, it isn't about politics — it's about sending the message that sexual harassment is never acceptable.

"This isn't a partisan issue," Holvey said. "This is how women are treated every day."

Brave New Films agrees, and is working to elevate their voices in an effort to hold Trump accountable.