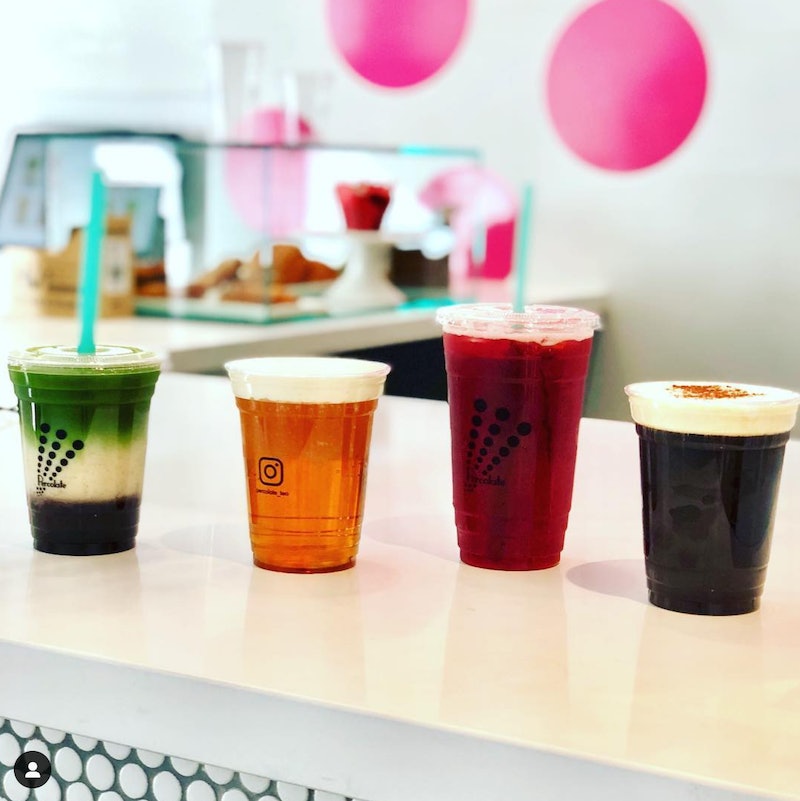 As someone who has Google alerts set up for both “cheese” and “coffee,” I perhaps should not have been surprised when I recently found myself staring at a story about a drink that combined both items in the same cup. And yet, I was surprised. “‘Cheese coffee?’”, I found myself wondering. “What on earth is ‘cheese coffee?’” Like any good curious pseudo-foodie would do, I promptly started looking into this new and unexpected beverage — and soon found that "cheese coffee" isn’t actually just one such beverage. Cheese coffee, it turns out, can be a bunch of different beverages depending on where in the world you are.

If you’re familiar with cheese tea — the iced tea beverage topped with a float of sweet or salty whipped cheese that took over everyone’s Instagram feeds in 2017 and 2018 after making its way to the United States from Asia — you might be tempted to assume that cheese coffee is pretty much the same thing, just with a different base beverage. In some cases, that’s true; indeed, the variety of the drink that brought cheese coffee into my cultural lexicon isn’t too dissimilar from cheese tea. It’s even the creation of a tea and coffee house based in Southern California that’s known for its cheese tea: Percolate’s BST, or Bittersweet Tiramisu.

Percolate, which has locations in Melrose and West LA, with a third coming to Los Feliz in the spring, includes among its specialty tea offerings a classic cheese tea drink called “Just Peachy” — an iced peach oolong tea topped with a float of cheese. Similarly, the BST tops another iced drink — cold brew, in this case — with a whipped concoction made of sweetened cream cheese and heavy cream, according to a recent profile of Percolate in Forbes. A sprinkling of cocoa powder finishes the whole thing off.

But this kind of cheese coffee isn’t exclusive to the United States (which, y’know, makes sense, given that cheese tea originated elsewhere, as well). In Vietnam, a similar drink has long been served at a specific coffee stall tucked away in Hanoi’s Old Quarter. It's not actually called “cheese coffee," though; rather, it’s called cà phê trúng, or egg coffee — because, as you might have guessed, the whipped topping floating atop the coffee contains eggs in addition to the cheese. According to the Guardian, the drink was invented by the father of the man who currently operates the coffee stall, Nguyen Van Dao, in 1946 as a workaround for the lack of readily available milk in Vietnam. The recipe remains a secret, but ingredients include egg yolk, butter, coffee powder, condensed milk, and cheese, all of which are whisked together and served with either hot or iced coffee.

But while both Vietnamese cà phê trúng and American cheese coffee whip the cheese together with something soft, making the cheese a texture that’s easy to drink, the trend is different in Europe. There, you don’t mix your cheese with anything before combining it with your coffee; you just dunk whole chunks of the stuff into your drink.

The details do change from country to country, though. In Sweden — home of the social coffee break known as fika — enjoying a traditional kaffeost, or “coffee cheese,” starts with a wooden mug, into which is placed a cube of dried cheese known as juustoleipä. Boiling hot coffee is then poured into the mug, which the cheese absorbs, turning into what Atlas Obscura describes as “a rich, moist cheese sponge.” You can either eat the cheese with a spoon while you drink your coffee, or you can just drink it straight and drain the cheese from the mug at the end.

Meanwhile, in France, the star of the show is Maroilles, a strong cheese of the stinky variety that, for many years, working class people in the country’s northernmost regions ate alongside their coffee for breakfast in the morning. According to Vice’s Munchies, the cheese is more commonly paired with champagne these days; however, as writer Emily Monaco noted, Maroilles takes on an appealing “new texture” when it’s dunked in hot coffee — one that’s “creamy on the edges and still slightly chalky in the center.” Even if this variety of cheese coffee has fallen somewhat out of vogue, it seems it’s still worth trying.

Ultimately, “cheese coffee” doesn’t have one singular definition; however, if you do start seeing it all over Instagram and other social media platforms in the near future, it’s likely to be the variety served by Percolate. Only time will tell if it catches on — but in the meantime, keep your taste buds primed.