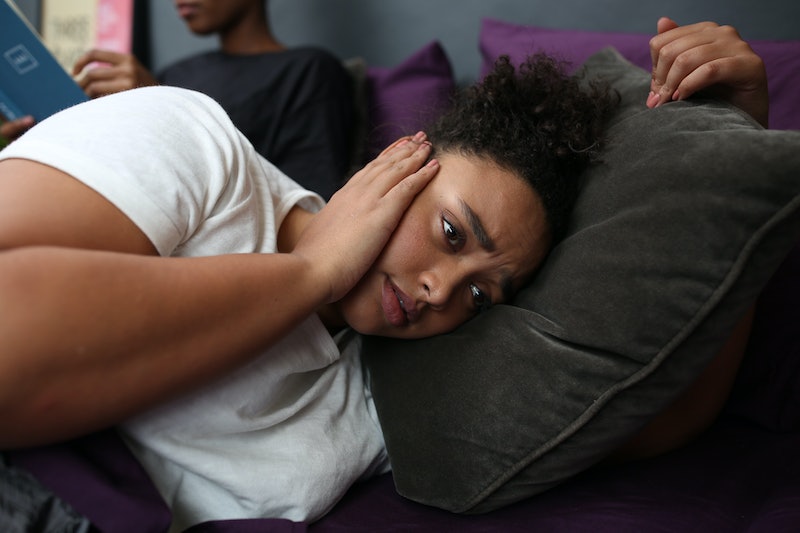 Sleep is kind of like dating someone who never texts you back. After a slew of missed texts, or in this case sleepless nights, how confident can you be in that relationship? If you're lying awake at night, "cognitive shuffling" is a sleep trick that might make snoozing a little easier. If you're like me, you've tried everything — melatonin, meditation, white noise, even allergy medicine — but a good night's sleep always seems just out of reach. But, there is hope. Cognitive scientist Luc Beaudoin of Simon Fraser University in Vancouver, Canada, may have finally solved the sleep riddle.

Beaudoin's method, dubbed cognitive shuffling, is designed to to lull the brain into that groggy state that precedes the sleep cycle by asking it to focus on random words and images without making connections between them, according to an article on Quartz. You can practice cognitive shuffling on your own or with the aid of an app.

"Adults live in a very 'left-brain' world dominated by language and thinking. Young children in contrast spend a lot of time imagining and playing. Of course, adults look at a lot of images — videos, TV, film, photos, and logos. But they tend to do so passively, and usually with lots of chatter (whether it’s vocal or not)," notes Beaudoin's website.

Want to give it a try? Here's what you need to know.

How To Do The Cognitive Shuffle

As Beaudoin's website explains, sleep researchers have discovered that as you fall asleep, you often experience visual images and “micro-dreams." These diverse images your imagination conjures up may actually help you fall asleep, whereas your tendency to think in a verbal, analytic, problem-solving mode can delay those coveted Zzzzs.

"The Cognitive Shuffle involves thinking of random items that are easy to visualize, non-threatening, and conducive to sleep," Beaudoin explains on his website where he offers step-by-step instructions about how to do the cognitive shuffle. Here's the breakdown.

If you're having trouble, there is also a cognitive shuffling app called mySleepButton that can help.

To me, cognitive shuffling kind of sounds like counting sheep, but less boring, and Beaudoin agrees. Quartz reports that counting sheep is too simple to hold your attention, whereas "cognitive shuffling gives your brain just enough toys to play with, but not enough coherent information to stir executive functioning." This delicate balance is the ticket to dreamland.

TIME Magazine reports that mindfulness mediation works because it's a good way for people to release tension they don't even realize they're experiencing, according to Jon Kabat-Zinn, a leader of modern mindfulness research and professor emeritus of medicine at the University of Massachusetts Medical School. Basically, doing a mindfulness body scan can help get you out of your head and into your body, making sleep come more easily.

Who needs sleep anyways, you might be thinking. The answer is: You do. Not getting enough sleep is more than just bothersome; it can negatively affect your health. Scientists are just now realizing just how important sack time is, and they're now recommending that you get seven-to-nine hours a night.

"I used to say sleep was the third pillar [of health]," Dr. Matthew Walker, director of the Sleep and Neuroimaging Laboratory at the University of California, Berkeley said during an expert panel on sleep at Fortune's Brainstorm Health conference, TIME recently reported. "I was absolutely wrong. It's the foundation."

Whichever method you choose to bring on the sandman, the overall lesson seems to be that the coherent word jumble running through your brain is what's keeping you up. Maybe this is why babies and dogs sleep so easily and deeply — they're not replaying conversations in their heads while laying in bed, they're imagining pictures instead.