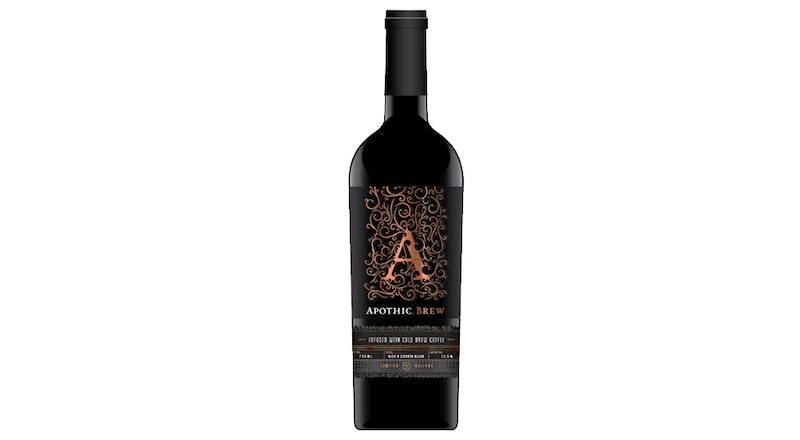 Coffee and red wine — two of the world's most common vices. Ask a group of 10 people to identify the earthly substances that are their biggest temptations and I'm willing to bet that you'll have at least five respondents admit their dependence on caffeine, booze, or both. There's no shame in that game, my friends. We're only human, after all! And coffee- and red wine-addicted humans alike are about to lose their you-know-what, because Apothic Wine has announced a hybrid product coming out on Apr. 1 that's going to satisfy all of the most desperate cravings — all at once. So what is cold brew red wine? (I mean, other than your wildest dreams realized, of course?) Pour yourself a glass (or mug) of something good and allow me to tell you more.

According to Cosmopolitan, Apothic Wine has previewed the launch of a new product called Apothic Brew, which brings together the best elements of a rich glass of red wine and everyone's caffeine obsession — cold brew. In case you're late to the cold brew party, all you really need to know about it in order to fully appreciate the excitement around cold brew red wine is that it has a fuller, less watered-down flavor than iced coffee, per Chowhound. To make it, medium-to-coarse ground coffee is steeped in room temperature water for at least 12 hours, at which point the grounds are filtered out for an even smoother drinking experience. Since time (instead of heat) is used to pull out the coffee's oils, sugar, and caffeine, it can also have a stronger and arguably more delicious taste.

According to Cosmopolitan's Danielle Tullo, who tried the drink, Apothic Brew "has a very strong coffee aroma, but it tastes more like red wine with hints of chocolate than your straight-up morning cup of joe." Yum! Tullo also notes that the drink finishes with a nice hint of cold brew, so there will be a lot to love about the blend whether you prefer the wine or coffee flavor.

The coffee punch might leave you wondering if you'll get a standard caffeine buzz from Apothic Brew, and the answer is no. According to Cosmopolitan, a serving of the wine contains less caffeine than a regular cup of decaf, despite the fact that it's infused with coffee, so, no, it's not going to become a substitute for your daily coffee pick-me-up. I doubt that this is going to keep you from giving the drink a try when it becomes available for shoppers on Apr. 1, but I just want to make sure you have all the information.

It's too early to tell what kind of response Apothic is going to get to their new product, but I'm pretty confident that it's going to be nothing but positive — and I'm sure they are too. Red wine meets cold brew? What could possibly go wrong? As news spreads, I'm sure that Twitter will be positively freaking out about this new magical concoction as both coffee and wine enthusiasts everywhere begin the countdown to Apr. 1.

A little cold brew red wine sounds like the perfect beverage to help us kick off the spring season... and the summer season after that. While the blend has been deemed limited edition by Apothic, it's unclear when it will no longer be available, so if you're at all tempted by this description, it's probably best that you head out to the store (I imagine that bottles will be available wherever other Apothic Wine varieties are sold) and stock up. No good thing lasts forever — and a combination of two good things? It's definitely going to be short-lived.