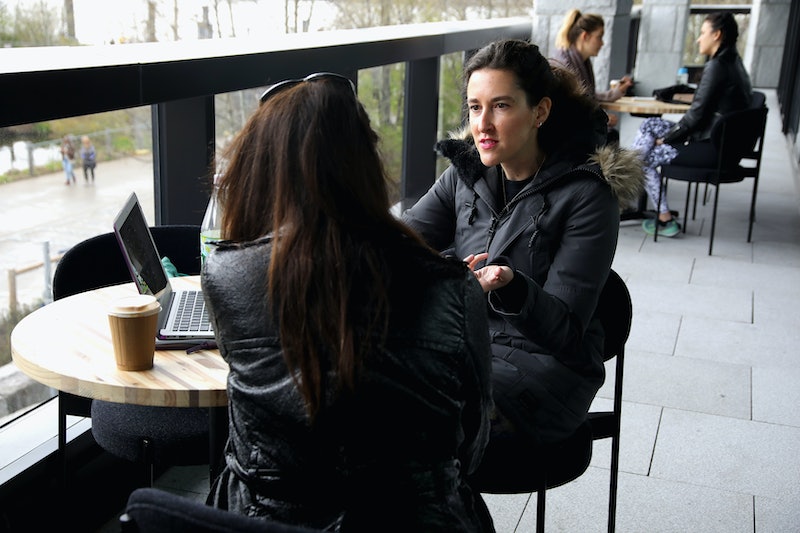 If you've ever sat next to someone you've never even spoken to before and felt an overwhelming sense of an emotion you can't place — or have even felt pain in your own body that seems to have no physical cause — there's a possibility you're an empath. If you've never heard of this term and are wondering what an empath is and whether or not you may be one, you're in the right place. The first thing to know is that being an empath is different than having empathy. "Empathy is when we reach our hearts out to others and put ourselves in their shoes," Dr. Judith Orloff, author of The Empath's Survival Guide, explained in a piece on YourTango.

While someone who is well-versed in empathy may be able to understand someone else's emotions when that person describes them, empaths actually absorb other people's emotions — both good and bad — and end up feeling them themselves with seemingly no cause. This emotional overload can lead to a host of health problems like fatigue, chronic pain, anxiety, depression, and more. "Being an empath goes even further," Dr. Orloff explained on YourTango. "Like many of my patients and myself, empaths are people who’re high on the empathic spectrum and actually feel what is happening to others in their own bodies."

While intensely feeling other people's emotions has its benefits — some people even consider being an empath akin to having a superpower — absorbing the suffering of humans, animals, and even the Earth can be debilitating if you don't know how to protect yourself. According to Dr. Orloff on her website, "There are different types of sensitivities an empath may experience. Physical empaths, for example, are especially attuned to other people’s physical symptoms and absorb them into their own bodies."

If you're not sure if you're an empath, Dr. Orloff has designed a quiz to help you find out. According to her website, if you answer yes to one-to-five questions, you’re at least a partial empath. If you answer yes to six-to-10 questions, you have moderate empathic tendencies. Answering yes to 11-to-15 questions means you have strong empathic tendencies, and answering yes to more than 15 questions means that you are a full-blown empath. The questions range from "Do arguments or yelling make me ill?" to "Do I replenish myself in nature?," and they're fairly specific.

Finding out you're an empath can come with some relief, because it offers an explanation for things you've likely been trying to figure out for years. For example, chronic pain, sensitivity to smells, sights and sounds, treatment-resistant depression, and why complete strangers seem to constantly dump personal, and often-times very painful, problems at your feet. This can result in an empath taking on this suffering as their own, which can manifest as mental and physical distress.

If you think this sounds like a bunch of new age mumbo jumbo, the concept has been around for hundreds of years. In the book The Theory Of Moral Sentiments, published in 1759, the author Adam Smith describes the phenomenon — and that was centuries ago.

As for modern-day research, new studies have shown that empaths might even have different brains than others. A study published in the journal NeuroImage found that empaths have more grey matter in a certain part of their brains, which could be the reason empaths take on other people's emotions and feel things more deeply.

If you are an empath, it's important to know that there are several strategies you can use to protect yourself from outside energy. Empaths can also benefit from practicing a lot of self-care, including meditation. While it can feel like a burden to feel so deeply, it can also be an amazing gift once you know how to protect yourself.