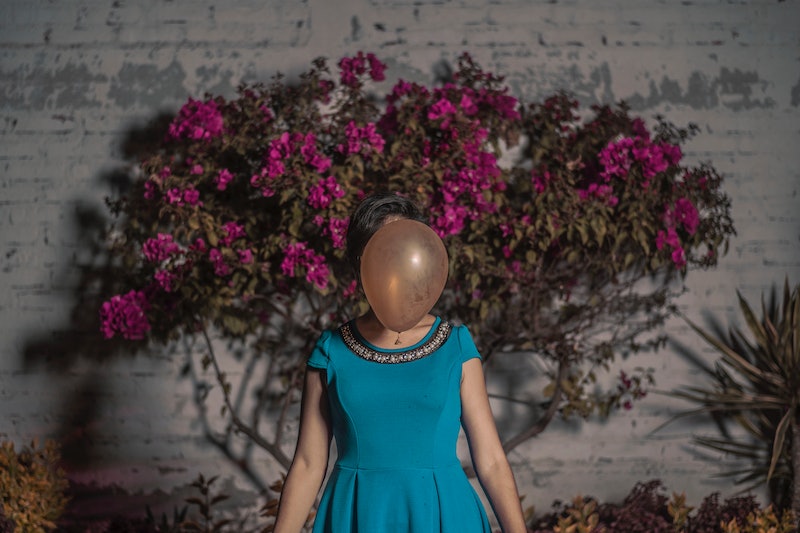 It was pitch black outside at around 7 p.m. one evening, and a drunk man was banging on the outside of my house. When he was unable to break through my fence into my backyard, he headed down the alley between my house and the empty one next to it and came to the door leading into my enclosed front porch. I looked him in the eye from less than a foot away.

When I called 911, the operator asked me to describe the man’s face, and I couldn’t. I have face blindness — also known as prosopagnosia — but I had never truly felt the weight of the “blind” part of my disorder until I was completely incapable of describing to the police anything other than the intruder’s shirt color.

Dr. Brad Duchaine, a professor of psychological and brain sciences at Dartmouth, tells Bustle that my struggles with facial recognition are not all that unique. "If I give a talk to a decent sized audience, it's common for someone to speak with me afterward to tell me about their substantial difficulties they have with face recognition." Studies have indicated that as many as one in 50 people have problems recognizing faces.

I already knew I had substantial difficulties, but coming face-to-face (no pun intended) with just how vulnerable being prosopagnosic could make me was still a shock.

By the time I relayed my wife's description of the intruder to the operator, the police had already arrived, and after unsuccessfully trying to get the intruder to answer questions, they pulled him off our front steps. That was days ago, and right now my mental image of him is exactly the same as it was 30 seconds after I saw him: Mostly blank.

Despite the relative commonality of prosopagnosia, many people don't know that it exists. That also means many people who have developmental prosopagnosia (as opposed to acquired prosopagnosia, which is usually caused by an event like an injury or surgery, Duchaine says) can go decades without realizing they have it.

"It's often challenging for people with prosopagnosia to recognize that their face recognition is a lot worse than other people's, because people tend to assume their abilities are comparable to other people's abilities," Duchaine explains.

I started to realize something may be "off" with me while I was working my first two jobs. As a kids' birthday party host, I often had issues finding children's parents amongst other guests. And as a receptionist for my small college's office of student advisers, I was constantly frustrated by my inability not only to recognize the students I was helping, but also my coworkers.

It was this frustration that made me Google, "Why is it so hard to recognize faces?" Behold, the second link that popped up was the Wikipedia page for prosopagnosia. Little things began to fall into place. My dad, a movie buff, had always quizzed me about actors, pointing randomly at the TV and going, "You should know who that is." Every time this happened, I would listen for the actor's voice; I could never identify them by face alone. I realized I almost always noted people's hairstyles and hair color before anything else about them. I realized looking too long at a photo made me unable to tell what emotion was present on its subject's face.

Honestly, having prosopagnosia doesn't usually cause me more significant issues. And since I'm a psychology nerd, studying the ways I unknowingly adapted over 20 years is pretty cool. Until this most recent break-in attempt, my biggest issue was just with movies. I almost always watch unfamiliar ones with my wife, so I can ask them for clarification if I lose track of who's who or if a character is new or recurring.

(Speaking of movies, there's a Milla Jovovich film called Faces in the Crowd, where Jovovich's character acquires prosopagnosia after being attacked by a serial killer. Afterward, she realizes the killer is following her, taunting her with her inability to pick him out of a crowd. As far as pop culture prosopagnosia representation goes, it's one of the better pieces — I just never expected it to hit so close to home.)

Had the situation gone a different way, had my wife not been able to recognize the intruder and pass along a description themself, I would have been totally adrift. Because I've found voice recognition helpful, I ask Duchaine about the possibility of crime victims being able to identify suspects through voice recognition, but he shuts that down. "People aren't all that good with voices, particularly unfamiliar voices, so I think it would be difficult for a prosopagnosic to confidently recognize a suspect from their voice," he says.

I had never truly felt the weight of the “blind” part of my disorder.

As it turns out, there's really no fix for face blindness. As Duchaine puts it, I "failed to develop the neurocognitive mechanisms necessary to recognize faces," and it's impossible to seed those into my brain. This is how I am.

In the case of face blindness, knowledge really is power. Knowing I have prosopagnosia has helped me understand the workarounds I naturally developed to make everyday life easier, like identifying people by voice, scent, hairstyle, and even things they often carry or wear, like a unique purse or a statement necklace. I've also figured out that I can learn to recognize some people virtually all the time if I put in significant effort.

If you think you may be face blind, or know someone else who may be, there are plenty of resources to check out, including sites to help kids with developmental prosopagnosia, widely available research, and Facebook support groups where face blind people chat about the intricacies, strangeness, and occasional beauty of our shared disorder.