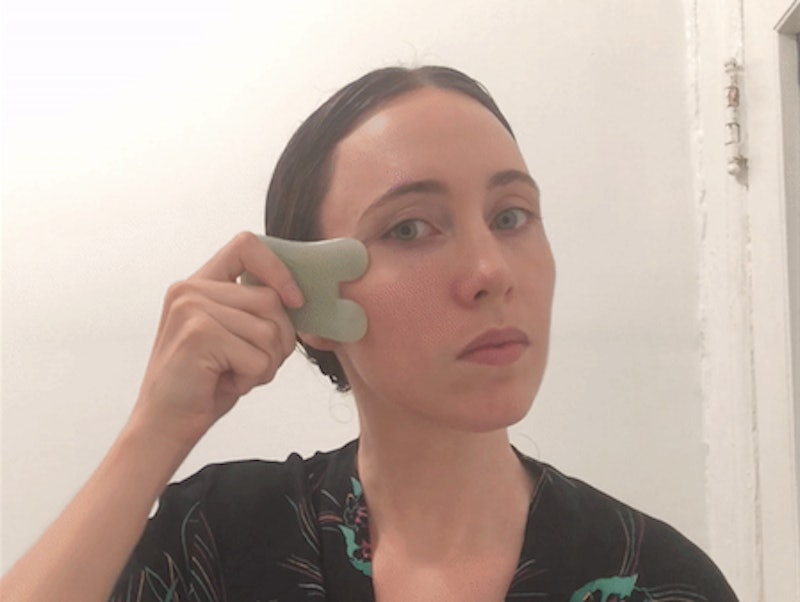 You've definitely heard of a jade roller, but what do you know about Gua Sha? The first time I encountered the concept of stone tools as skin care was at a friend’s apartment, over tequila. I opened the freezer in search of an ice cube for a mixed drink, and instead happened upon a jade roller. When I asked her if it actually worked I didn’t get a definitive answer: “maybe”, she said. Maybe it’s just the cold that calms the skin. Maybe it’s as ineffective as the prolific cucumber eye mask.

Either way my interest was piqued, and when I delved into the world of precious stones, I discovered the Gua Sha technique, an ancient Chinese healing practice in which a flat stone (typically rose quartz or jade) is pulled along distinct paths on the face and neck. A more powerful and precise cousin to the jade roller, the goal of Gua Sha is to drain any excess fluid, instigate blood flow, and loosen blocked chi. As someone who is plagued by dark and puffy under-eyes, this sounded like a dream.

I promptly scheduled a Gua Sha facial at Treatment by Lanshin, a holistic healing studio located in Williamsburg and founded by Sandra Lanshin Chiu. The studio, which functions as a place of healing as well as a spa of sorts, focuses on beauty as it relates to wellness. Before my treatment, Chiu urged me to shun the negativity associated with aging, and rather embrace the fact that I have happy, healthy skin with few daily issues.

I was certainly skeptical that a jade stone and some serum would do anything miraculous. But comparing before and after photos, I could see a marked change. My under-eyes looked slightly de-puffed, but the most amazing development was the change in my complexion. What was a pale pink previously had turned into a much more complimentary peachy hue. I wondered if I could recreate the results with my own tools and touch, and so I set out to Gua Sha for a consecutive seven days.

I purchased the above tool, but there are countless options out there on the world wide web. The first few times I performed the Gua Sha on myself, I watched the below video, but again there are abridged versions and alternate options aplenty.

Initially I thought that each morning, after my shower, would be the ideal treatment time. Alas, by day three my tendency to run very late kept me from indulging in the ritual until the end of the day, and so my morning habit turned into a nightly Gua Sha and Bravo. And if I told you I didn’t simultaneously sip a glass of wine, I would be lying.

I began to enjoy the nightly ritual of working the stone from my neck to my décolletage, then up the face to my forehead. If nothing else, running this two-pronged tool along various muscles and bones made me more aware of neglected areas. I felt the ridges in my jawbone and clavicle for the first time, and acknowledged how thin and fragile the under-eye skin is. The last step each night calls for a pass over the third eye, which instantaneously relaxed me and put me in sleep mode. Overall, it felt like it was working.

I made sure I had a clean and moisturized face for each treatment, and occasionally put on a meditative YouTube mix, which made the routine exponentially more relaxing. Sometimes I remembered to put the tool in the freezer, which may actually be against expert recommendations but I enjoyed this extra step as the coolness soothed any blemishes or redness.

Per Huffington Post, Dr. Jennifer Chwalek, M.D., a New York dermatologist, recognizes the benefits of an invigorating face rub to dislodge any stagnant lymphatic fluids and break up fascia (tissue that hugs muscle). And call me crazy, but I feel like I could actually hear knots or toxins release as I dragged the flat tool along my cheeks and forehead. But, day seven of my experiment came and went and, unfortunately, I did not observe any prominent changes. I looked for wider eyes, a more sculpted jaw, a more flattering tone, or fewer blemishes. If there were any changes, they were too subtle to notice upon first glance. I can’t say whether this was due to the fact that my DIY facial lacked an expert’s touch, or if Gua Sha’s popularity is based largely on placebo.

Left: Before I began the daily Gua Sha experiment; Right: After I incorporated Gua Sha into my skin care routine every day for a week
1 / 2

With things related to wellness, I believe that paying attention to what feels good can be as important as measurable results. Some beauty experts advise starting botox young, while others are aghast at the thought of injecting a person in their twenties. Diet and exercise fads come and go as quickly as the days and new studies are constantly plowing through uncharted territory. With that in mind, I will certainly use my Gua Sha tool again, albeit more sparingly than every day. If only for the fraction of a chance that my hangover will go unnoticed on Saturday morning.

More like this
Benefit Just Upped The Brow Game – Again
By Justine Knight
This K-Beauty “Wrinkle Bounce” Stick Is Going Viral On TikTok
By Destiny Knight
The 6 Best Talc-Free Setting Powders
By Maria Del Russo
Meet Foreverist, The Skin Care Brand That Keeps Tattoos Looking Fresh
By Audrey Noble
Get Even More From Bustle — Sign Up For The Newsletter