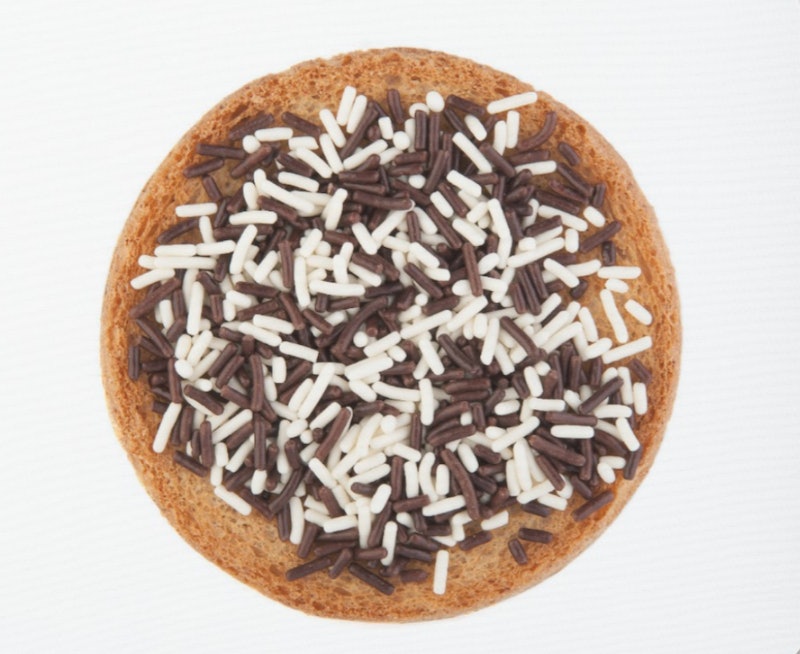 Mornings not your jam? Perhaps it's because you're not having enough fun at breakfast. Enter hagelslag, the joyful Dutch breakfast that will actually have you looking forward to getting out of bed. Hagelslag means hailstorm in Dutch, and when you top your buttered toast with a hailstorm of chocolate sprinkles, you've got the breakfast dreams are made of. Not convinced? The Netherlands, home of sprinkles on toast for breakfast, is the sixth happiest country in the world, according to the World Happiness Report. The U.S., by comparison, is 18th on the list, perhaps because we haven't yet welcomed hagelslag into our hearts.

It's not just for breakfast. If you want to have a happier lunch or afternoon snack, you can make yourself a hagelslag sandwich by buttering two pieces of your favorite bread and smashing some sprinkles in the middle. Hagelslag is so beloved that, according to the blog Stuff Dutch People Like, people living in the Netherlands are said to consume what amounts to the combined weight of 1,000 adult elephants in hagelslag each year. That's a lot of freakin' sprinkles. If you're scratching your head about why Dutch people love chocolate sprinkles so much, it's because these are no ordinary sprinkles. They're made with real cacao, which makes a big difference.

The good news is that if you're having major FOMO, you can buy some real hagelslag on Amazon. "So much better than the American style sprinkles with seem mostly sugar, lecithin, and carnauba wax. These have 32 [percent] cocoa in them and you can taste it," one reviewer said of Deruyter Chocoadehagel Puur (dark chocolate sprinkles). If chocolate isn't your heart's desire, you can get these delightful sprinkles in a number of flavors. This means you can create hagelslag everyone will love for your next potluck, party, or game night.

Seriously, these are so easy to make that even the most kitchen-challenged person can whip up a platter of the best thing anyone has ever tasted. What's more, if you want to incorporate some practices from the world's happiest countries into your daily routine, settle in for some kalsarikänni, the Finnish practice of drinking in your underwear, and hygge, the art of being cozy that's a common form of winter self-care in Denmark and Norway. But don't stop there because you know what goes perfect with a cozy night of drinking wine in your skivvies? Chocolate sprinkles on buttered bread.

Apparently Australia, which is the 10th happiest country in the world, has its own version of a sprinkle toast. Australian Fairy Bread is pretty much the same idea as hagelslag but instead of cacao sprinkles, it calls for rainbow sprinkles. That's right, it's 100-percent acceptable to eat yourself a rainbow sandwich any time you want. Overall, it seems like people in the U.S. need to incorporate more opportunities for joy into our lives if we want to break into the top 10 on the happiness list.

This means sometimes having a sprinkles sandwich rather than a tofu one, opting for a doughnut salad once in awhile instead of forcing yourself to graze on leaves and twigs, and spending more time being comfy cozy. Because, you don't want to get to the end of your life and wish you'd eaten more hagelslag.