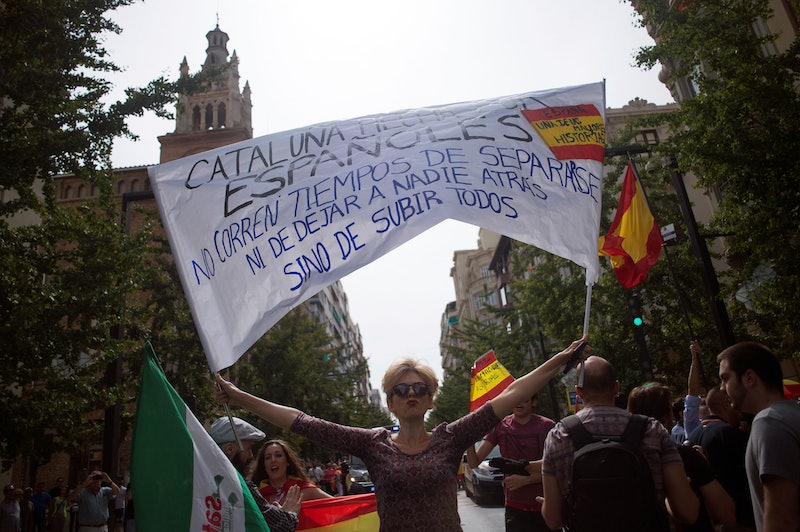 On Sunday, an independence referendum in Spain turned violent as police cracked down on Catalan citizens who headed to the polls to vote for the independence of Catalonia, a disputed territory in northeastern Spain. The referendum had been declared illegal by the Spanish government, and Spanish authorities have reportedly injured at least 300 citizens in a violent crackdown on polling stations.

According to CNN, Madrid deployed the national police force to close down polling stations in Barcelona, where the vote was being held, and prevent as many people as possible from casting ballots. Police reportedly used rubber bullets and batons to disperse voters in confrontations that left many Catalans bloody and injured.

Carles Puigdemont, the Catalan leader, has criticized the Spanish government's “unjustified and irresponsible” means of stopping the referendum. "Violence can never be the answer!" Puigdemont said on Twitter. "We condemn all forms of violence and reaffirm our call for political dialogue."

Catalonia, the richest and most industrialized nation in Spain with its own distinct language and culture, has been pushing for independence or some form of autonomy from the Spanish government for the past three centuries. In 2006, Spain granted Catalonia “nation” status and taxation power; however, this ruling was struck down by Spain's Constitutional Court in 2010, which argued that Catalans may be a "nationality," but Catalonia is not a nation.

Given Catalonia's financial power, Madrid seems determined to hold onto the region. As calls for a referendum intensified last month, the Spanish government responded aggressively. Madrid reportedly shut down websites and advertising campaigns that have promoted the vote, raided the offices of companies printing paper ballots, and detained a dozen regional government officials, according to the New York Times.

The Spanish government has also fiercely condemned Catalonia's decision to move forward with the vote, despite the referendum having been declared illegal.

"The referendum couldn't be held, and it's not been held. To carry on with this farce makes no sense, it doesn't lead anywhere," Spanish Deputy Prime Minister Soraya Sáenz de Santamaría said at a press conference on Sunday. ""Despite the blatant illegality of this, [the Catalan government] wanted to continue, using children and old people recklessly."

Puigdemont said on Friday that he did not believe the referendum would turn voiolent, but he did suggest that, should violence occur, authorities would not be able to stifle Catalan's calls for independence.

“If you stop somebody from unfolding a banner that asks for more democracy, the problem is with the person who forces its withdrawal,” he said.

Given the violence that has been ensued in the midst of the contoversial referendum (By some accounts, up to 465 citizens have been injured as a result of the Spanish government's efforts to stop the vote), it's unclear at the moment if ballots will still be counted or if referednum results will be announced.