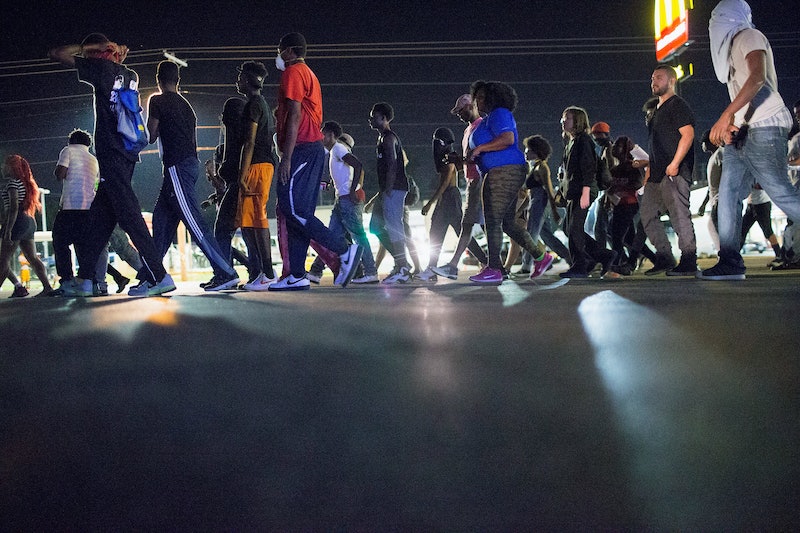 Nearly three years after 18-year-old Mike Brown was fatally shot by a white police officer, Darren Wilson, a newly released video related to the Ferguson case has sparked protests in Ferguson, MO, where the teenager was killed. The new video — surveillance footage from the convenience store Brown visited minutes before Wilson shot and killed him — appears to show Brown allegedly exchanging a small bag many believe contained marijuana for two boxes of cigarillos from Ferguson Market employees. He then appears to have the employees hold the cigarillos for him behind the counter before he leaves, all taking place in the early hours of the day he died. The new video appears to give greater context to another surveillance video that was widely circulated just after Brown was killed.

The footage released earlier showed Brown just before he was killed appearing to have a disagreement with a Market employee and pushing them before taking the cigarillos. It had previously been used in attempts to illustrate his criminality and justify Wilson's shooting him. That narrative seems to be refuted by the new video appearing to show Brown's understanding with workers at the convenience store. And though the case was extensively covered by media outlets worldwide and thoroughly investigated by the Ferguson Police Department, the new footage may have never been released to the public had documentary filmmaker Jason Pollock not obtained it himself. The video, released to the New York Times, is shown in Pollock's documentary about the shooting, "Stranger Fruit," which premiered at SXSW on Mar. 11.

The documentary and the surveillance footage sparked a Mar. 12 protest at Ferguson Market. According to the St. Louis Post-Dispatch, about 100 people gathered in the store's parking lot before police cleared the area. During that protest, the store's lawyer reportedly spoke to those gathered, claimed that the released footage had been edited to cut out the moment when employees threw the bag back to Brown, and said he would release the undoctored footage to the public on Mar. 13. The Post-Dispatch also reports that shots were heard near the Market just before midnight, though it seems no one was injured.

The video has raised questions about why police didn't release it to the media when they released footage of the later interaction. A spokesman for the St. Louis County police department told the New York Times that the new footage wasn't relevant to the case. Pollock thinks otherwise, telling the paper, "This shows their intention to make him look bad. And shows suppression of evidence.” The filmmaker appeared on CNN on Mar. 13 to talk about the video. He asserted that he hadn't cut any part of the video showing employees giving the small bag back to Brown and also claimed that the store was known for being "shady" and sometimes even sold marijuana to its customers.

Wilson left the police force in 2014. The following year, a grand jury decided not to indict Wilson. A report by the Department of Justice also cleared him of violating Brown's civil rights. The new footage's effect on the case, or lack thereof, remains to be seen.

Either way, Ferguson, and Mike Brown's killing are back in the national news with even more questions than before.