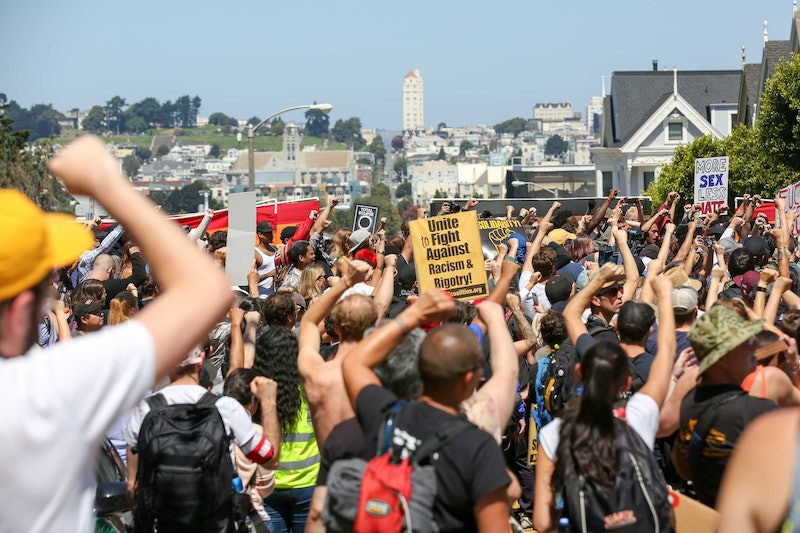 For the past couple of weeks, Saturday, August 26 was shaping up to be a tumultuous day. With far-right and white supremacist demonstrators planning to descend on the city of San Francisco, weeks after similar events went down in Charlottesville, Virginia and Boston, Massachusetts (with wildly different outcomes), things looked prime for virulent racist protests and massive anti-racist counter-protests. But at the eleventh hour, things changed ― if you're wondering what's happening in San Francisco right now, it's not quite what was expected a couple of days ago.

Up until Friday, it was expected that both San Francisco and Berkeley would play host to far-right political rallies this Saturday and Sunday respectively, of the sort that brought deadly white supremacist and neo-Nazi violence to Charlottesville. In San Francisco's case, the rally was meant to be held at Crissy Field, within view of the Golden Gate Bridge.

However, the organizers of the rallies cancelled them just before the weekend arrived, citing fears of violence amid what they surely understood would be a staunch and unapologetic resistance to their presence. Instead, they were forced to downsize to an extreme extent, delivering a Facebook Live press conference from inside an undisclosed building while anti-racist demonstrators marched through the streets.

In other words, if you're keeping score since the deadly events in Charlottesville ― where 32-year-old anti-racist counter-protester Heather Heyer was slain, and many more were injured ― planned far-right rallies in Boston and San Francisco have now been almost entirely washed out and overwhelmed by thousands of counter-demonstrators.

The marchers moved through the streets in celebration of the shutdown of the far-right demonstrations, culminating in a combination unity/victory rally out in front of City Hall that included none other than MC Hammer. In short, a day that seemed for a while like it could be tense and harrowing has, so far at least, been anything but.

The Berkeley rally scheduled for Sunday has also reportedly been cancelled, although it's far too premature to say what will happen. Although the rally's organizers have reportedly called it off, there's nothing to stop far-right activists, white supremacists, or neo-Nazis who were planning to show up from gathering on their own.

There have already been a couple contentious and chaotic protests in Berkeley this year, first when a far-right Breitbart writer was scheduled to speak at UC Berkeley in February, and when a bigger white supremacist event ― ostensibly a pro-Trump demonstration ― was held adjacent to the campus in March. The latter example saw violent clashes between the far-right rallygoers and anti-fascist activists, of much the same sort that the city of San Francisco was bracing for in advance of the cancellation on Friday.