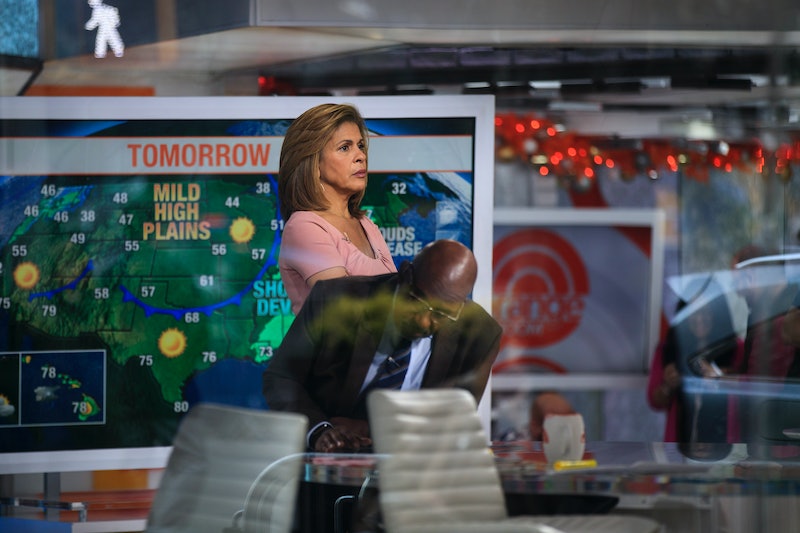 NBC's Today show viewers got a delightful surprise on Tuesday morning, when Savannah Guthrie announced on the show that Hoda Kotb would be the show's new permanent co-host. NBC did not say whether its longtime journalist, whose net worth reportedly stood at $12 million towards the end of 2016, would be getting a raise, but Kotb's salary as a Today anchor might see a substantial increase.

Kotb temporarily filled the show's empty spot after Matt Lauer was abruptly fired in November 2017 amid sexual misconduct allegations. (Lauer has apologized and mostly denied the accusations, but admitted "there is enough truth in these stories.") At the time, Lauer's estimated salary from NBC was between $20-$25 million, making him the highest-paid anchor at the network. His firing from NBC put Megyn Kelly at the top, but it's unclear whether Kotb — or Guthrie, for that matter — will get a pay raise, especially since the Today show's ratings have soared in the wake of Lauer's ousting.

Weeks ago, Guthrie and Kotb hosted the Today show together as they reported on-air the news that Lauer was being let go. In an emotional moment on the morning show, the two women vowed to be "transparent" and "straightforward" while reporting on the news about their then-colleague and friend. "This reckoning that so many organizations have been going through is important," Guthrie said, "it's long overdue, and it must result in workplaces where all women — all people — feel safe and respected."

In 1998, Kotb joined NBC as a correspondent for Dateline, and has been a substitute anchor for the Today show over the years. She took over Lauer's hosting chair after he was removed in November, and on Tuesday was officially declared a permanent anchor for the first two hours of the show, the first time her name was featured on the show's opening announcement.

Guthrie opened the show by delivering the news:

It’s 2018 and we are kicking off the year right because Hoda is officially the co-anchor of Today. ... This has to be the most popular decision NBC News have ever made and I’m so thrilled. ... Hoda, you are a partner and a friend and a sister, and I am so happy to be doing this.

It marks the first time NBC's popular morning show has two female co-anchors. While NBC did not make public just how much Kotb would be earning with this new position — she is still co-hosting Today's fourth hour with Kathie Lee Gifford — many will likely be wondering if she'll be making as much money as Lauer had in that spot.

The Las Vegas Review-Journal noted that Lauer's net worth was about $60 million at the end of 2016, and Kotb's at $12 million. Her promotion is a golden opportunity for the network to send a message about equal pay, especially considering how the show's ratings have gone through the roof in the past month with both of them at the helm.

Kotb and Guthrie are a natural match on Today, with strong chemistry and an easy rapport. Kotb told People magazine in an upcoming issue that she was offered the position just before the holidays, but "it doesn’t feel like the headline because we’ve worked together for a long time."

Her becoming its co-host marks the start of a new era for the show, as well as continues a pattern of women replacing men ousted by sexual harassment and assault allegations. On-air on Tuesday, the show's hosts celebrated the news with champagne. "I wish everybody could see how everybody’s been loving up on Hoda, giving her hugs. Everyone is so thrilled," Guthrie said, "and deservedly so. It speaks to the kind of person that you are. This is a new day on Today and there is so much to celebrate. What a beautiful family."

More like this
Lydia Leonard Is Setting The Record Straight
By Olivia-Anne Cleary
Spice Girls’ Net Worth: The Richest Member Is Wealthier Than The Rest Combined
By Hugh McIntyre
Playing A Scrub Nurse On 'Grey’s Anatomy' Made BokHee An Instagram Royalty
By Brad Witter
23 Abortion Funds In States With Trigger Bans To Donate To
By Emma Carey
Get Even More From Bustle — Sign Up For The Newsletter