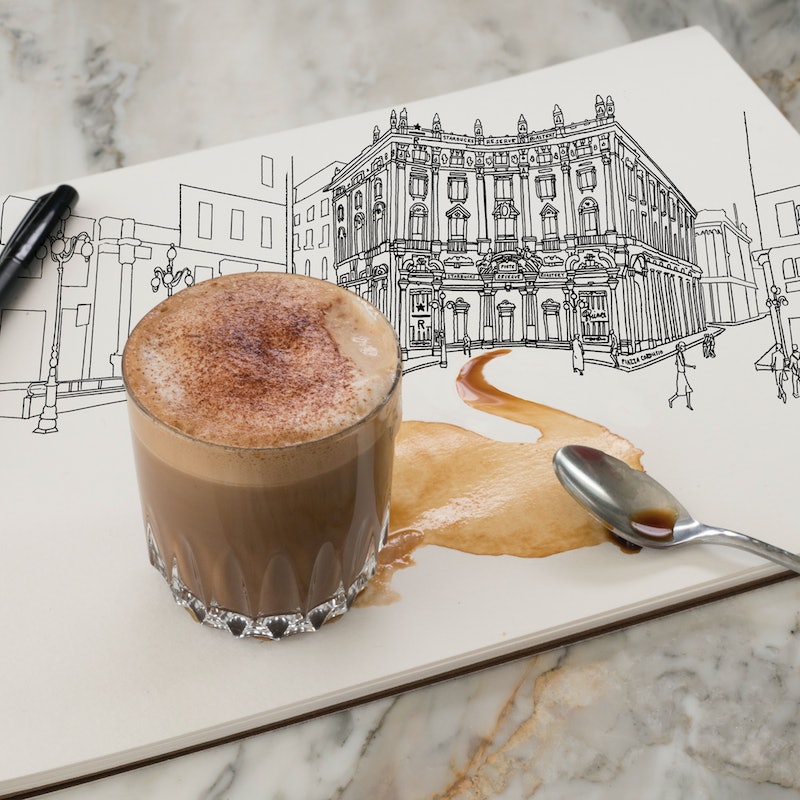 Just as Pumpkin Spice Latte season is picking up, Starbucks has added a new espresso drink to its menu. It's called the Cordusio, and while it's inspired by Italy, it's not exactly Italian. Still, it sounds pretty tasty, so if you want to know what's in a Cordusio before you try one out yourself, read on.

The Cordusio is being added to Starbucks menus temporarily in honor of the coffee chain opening a Starbucks Reserve Roastery in Milan. But not only did the first Reserve location open in Italy on Friday, it's the first Starbucks in Italy, period. Of course, espresso is huge in Italy, so the country already has its caffeine fix covered without Starbucks. But, the company hopes people will be attracted to the Reserve location with its heated marble countertops, cocktail bar, and view of coffee being roasted. At least for the opening, people were interested. As shown in photos shared by EuroNews, there was a huge crowd gathered outside.

So, the new drink is in honor of this big step for Starbucks, and it's named after the location of the new store: Piazza Cordusio. There is not a drink in Italy called the Cordusio, Starbucks simply named this drink after the area.

The Cordusio seems like a hybrid of a mocha latte and a cappuccino. According to Starbucks, "the Cordusio features an extra shot of espresso paired with perfectly steamed whole milk, mocha sauce and finished with a light dusting of cocoa powder." Starbucks also calls it their "most espresso-forward mocha" — the mocha latte is more milk-forward — and describes it as a "a rich, bitter sweet mocha, reminiscent of dark chocolate."

The Cordusio will be available in Starbucks locations in the United States, Peru, Mexico, and Europe while supplies last.

Former Starbucks CEO and current chairman emeritus Howard Schultz was inspired by coffee shops in Italy when Starbucks was first taking off. Schultz said of the opening,

To make a long story short, you are standing in the most extraordinary expression of history and heritage and love and passion for what we do at Starbucks. Everything we have done has led to this moment. My dream of bringing Starbucks to Italy is being fulfilled, and I know in my heart it will be successful.

That being the case, it seems that perhaps a more traditional Italian drink could have been used as the specialty beverage in honor of the opening. Since plain espresso is the biggest thing there, what about using coffee roasted in Italy to make one? Or maybe a cappuccino that is made in a particularly Italian way? The point is, Italians are known for keeping their coffee simple — which explains the resistance by some to Starbucks and the fact that there are no Frappuccinos on the menu at the new location — so that idea of minimalism could have been explored instead of something that seems pretty... Starbucks-y, even if the Cordusio is espresso-based and Italian-inspired.

Still, wherever you fall on Italy-Starbucks relations, the drink itself does sound good if you like espresso and like dark chocolate. If you want to try one, you should probably get to it soon.