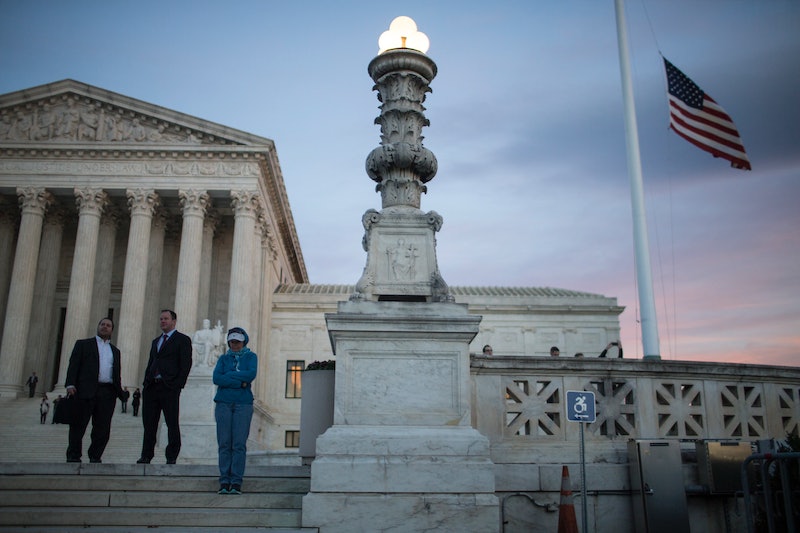 After the strict abortion laws that made it through state legislatures in Georgia and Alabama, among others, abortion legislation is on everyone's mind. On Tuesday, as if on cue, the Supreme Court released an opinion about an abortion law from Indiana — but it's a very different law than the strict bans that people across the country are currently protesting. Now you'll need to know what Indiana's fetal remains law is, because the Supreme Court just allowed it to go into effect.

Tuesday's decision comes in reference to two abortion laws that Mike Pence signed while he was governor of Indiana, according to CNBC. One banned abortions on the basis of sex, race, or disability, which a lower court blocked; the Supreme Court declined to take up that element of the law, so the lower court's ruling stands and the law remains blocked, according to CNN. They allowed the other to go into effect, though, and rather than banning a type of abortion or abortions after a certain time, it concerns the remains of the aborted fetus.

Human remains are required to be either buried or cremated, and the Indiana law required that the same rules apply to aborted or miscarried fetuses, as The Washington Post explained.

“This court has already acknowledged that a state has a ‘legitimate interest in proper disposal of fetal remains,’" the court wrote in the decision, which none of the justices signed. “The only remaining question, then, is whether Indiana’s law is rationally related to the state’s interest in proper disposal of fetal remains. We conclude that it is, even if it is not perfectly tailored to that end.”

In the decision, though, the court went out of its way to say that it was not addressing the precedent established Planned Parenthood v. Casey stating that abortion regulations must not place an "undue burden" on the right to an abortion.

"We reiterate that, in challenging this provision, respondents have never argued that Indiana’s law imposes an undue burden on a woman’s right to obtain an abortion," the decision read. "This case, as litigated, therefore does not implicate our cases applying the undue burden test to abortion regulations."

The reason they didn't take up the provision of the law banning abortions on the basis of sex, disability, or race, as Rewire.news explained, was that no appellate court had written a decision for them to address. Rewire also wrote that it was a bit unexpected for them to even hear the case about fetal remains, since there wasn't a disagree between two lower courts over the law. In his concurrence to the decision, though, Thomas not only reaffirms the court's decision regarding fetal remains, but also implies that he would be amenable to hearing a case on the provision of the law that the court decided not to address — and likely upholding the law.

In a footnote to her dissent, though, Justice Ruth Bader Ginsburg made a statement arguing that the court wasn't adequately considering the potential ramifications of the decision.

"The cost of," Ginsburg wrote, "And trauma potentially induced by, a post-procedure requirement may well constitute an undue burden."

But still, the law will now go into effect.