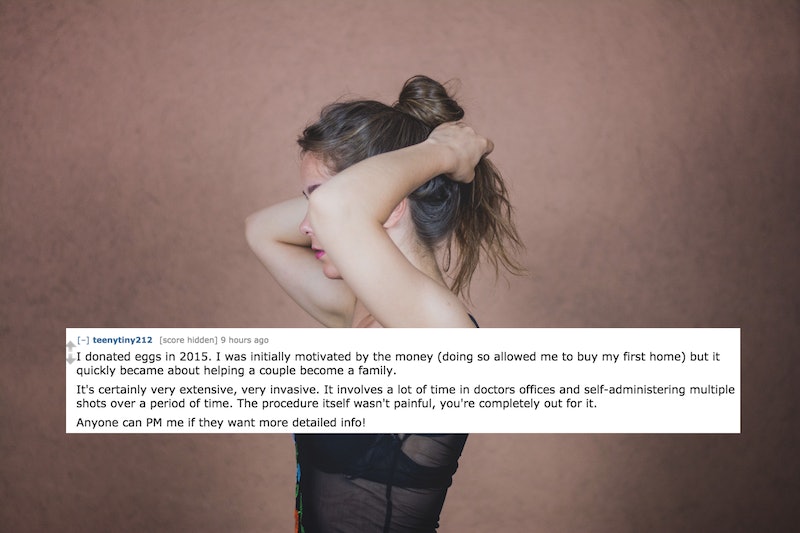 Like many young American women, I used to view egg donation as a financial escape hatch — a way to pay off student loans or medical bills by donating something my body was producing anyway. In reality, it's as complicated as any other medical procedure, but women's real experiences with egg donation can be surprisingly hard to find. It doesn't help that it's relatively new; the first successful pregnancy using donated eggs took place in Australia in 1983. Furthermore, as the New York Times recently (and extensively) pointed out, there's little information about its long-term health effects on donors. How are women supposed to make an informed decision about the procedure?

This question is what led a Reddit user to post on the subreddit Ask Women, requesting people to share their stories about donating eggs. "How did it go, and were you glad you did it?" the user wrote.

Dozens of women responded. Those who had actually donated listed the physical and emotional effects of donating eggs, which seems to affect everyone differently. Others said they had attempted to donate but didn't make it through the strict screening processes. Meanwhile, women who were considering donation chimed in to ask further questions: Did it hurt? Were there mood swings? How often do donors think about the children they'll never meet?

Whether you're thinking about donating your own eggs or you're just curious, the thread is incredibly informative. You can check it out for yourself on Ask Women, but here are nine highlights from the comments.