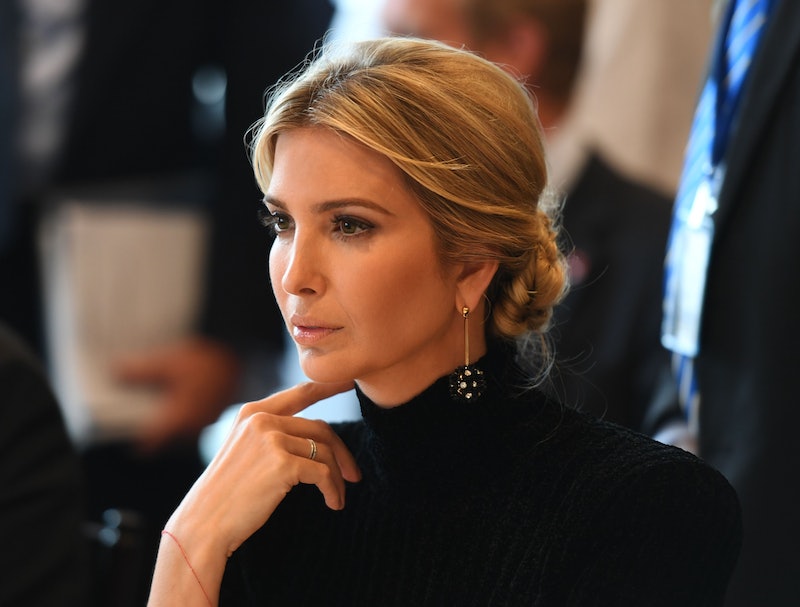 Hold up, wait a minute. Ivanka Trump's real name is not actually Ivanka. According to the first daughter herself, the name she's turned into a brand is actually just a nickname. This has apparently been public knowledge for years, but somehow it slipped by many of us until a tweet from 2010 started making the rounds, seven years later.

It turns out Ivanka's real name is actually Ivana Marie Trump, just like her mother. In 2010, Ivanka responded to a tweet asking her to explain how she got her name. She wrote, "My actual name is Ivana. In Czech, Ivanka is the baby name for Ivana, like Bobby is to Robert."

Czechoslovakian-born Ivana is President Donald Trump's first wife and the mother of Ivanka, Eric, and Donald Jr. She recently made news when she claimed that she has a direct line to the White House and talks to the president every two weeks or so. But the bigger controversy came when she called herself first lady. "And I don't want to cause any kind of jealousy or something like that, because I'm basically first Trump wife," she said in an interview with ABC News’ Amy Robach to promote her new book. "OK? I'm first lady."

First Lady Melania Trump, Ivanka's stepmother, hit back at the comments in a statement from a spokesperson that read, "[Melania] plans to use her title and role to help children, not sell books."

The fact that Ivanka's real name isn't Ivanka makes sense, when you think about it. The firstborn son of the Trumps was named Donald Jr., after his father. And therefore, the firstborn daughter was named Ivana, after her mother. In addition to his children with the elder Ivana, President Trump also fathered Tiffany Trump, whose mother is Trump's second wife, Marla Maples, and Barron Trump, whose mother is First Lady Melania Trump.

Ivanka has built an entire business based on her nickname. The Ivanka Trump brand — originally built to be a high-end luxury brand, but now more of a "downmarket" fashion label, according to Bloomberg — sells handbags, jewelry, shoes, and clothes.

The eponymous label has seen its fair share of controversies. People have pointed out that though President Trump has demanded that American companies "buy American and hire American," his daughter's business produces its wares with foreign factories in countries that often exploit their employees. Abigail Klem, now-president of the Ivanka Trump brand after Ivanka stepped down (though she still owns the company), told The Washington Post that the factories the brand uses operate "at the highest standard," adding that "Ivanka sought to partner with the best in the industry."

Millions of people use nicknames over their real names, and in Ivanka's case, it's clearly worked out well for her. Her name is a household name, whether for her brand or whether for her role as a presidential adviser in the White House. It may evoke negative feelings for some, but for others, the name Ivanka Trump has positive connotations.

But a name that brings out feelings either way is a name that's known by nearly everyone — and by not going by Ivana, Ivanka Trump sure made a name for herself that is hers and hers alone.