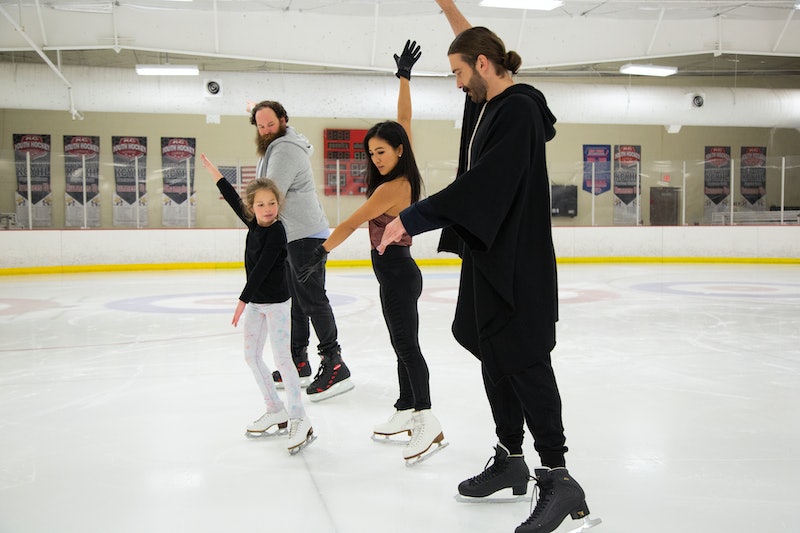 This season of Queer Eye, as always, features a band of heroes viewers will have no problem rooting for. Among them is Episode 3's John Stoner, a single dad who's grappling with a mental health slump and struggling to leave his immature style behind. When the Fab Five leave him, he seems like he's on a great path to leading a better life. And when you check out where John from Queer Eye is now, it sure looks like he's kept that positive momentum up.

John was willing to change pretty much right when the Bobby, Karamo, Tan, Jonathan and Antoni showed up. He didn't show any real resistance, and he knew that he needed to take whatever they said to heart. His young daughter, Lucy, was the adorable nominator who got her dad to the show in the first place, and she just wanted him to live his life in a way that was a little more put together.

The goal for the end of the week was for John to show up at Lucy's figure skating competition looking dapper and feeling a part of her team, rather than being relegated to the position of clueless dad on the sidelines. They accomplished that, and more, and John's Instagram account hints that he's as involved of a dad as ever.

He & Lucy Look As Happy As Ever

This photo from about two weeks before Queer Eye's Season 4 debuted shows Lucy and John happily grabbing ice cream — and that beard trim that Jonathan was so proud of seems to have become a new staple.

There Is A New Furry Friend In The Mix

Their family seems to have acquired ANOTHER corgi, so there's no telling how much Antoni might freak out if he pays them another visit.

Lucy's Room Is A Huge Success

In case you were wondering, Lucy loves the room that Bobby put together for her, and has been photographed lounging in its luxury more than once. That hammock is to die for.

John's In The Kitchen More Than Ever

One of the things the Fab Five wanted to encourage was John cooking with Lucy, since she has a love for the kitchen and he was often sleeping through any activity in there. This shot of them making cupcakes shows that things might've changed.

And He Repeated The Cinnamon Apple Pancakes!

Antoni taught John to make pancakes with almond flour and a warm apple topping, and it looked divine. Judging by this photo, John is intent on making them long after Antoni's departure.

OK, OK, so we don't really know what's going on here. They might just be friends! We can't be sure of the details of John's life, nor is it really our business. But a woman appears in quite a few of his more recent Instagram posts, so who knows? There might be a new romance in his life, and he seems happy, which is good enough for me.

Essentially, after his time with the Fab Five, John looks like he's leading a happy life. Granted, social media is only a curated slice of someone's whole experience, and you can't judge everything that's going on by what someone chooses to post. But Lucy's happiness and their affection for one another certainly rings true, and his Queer Eye experience has apparently only made that more true.

More like this
Tahzjuan Took A Cruise With These Bachelor Nation Alums After Visiting Zach's Season
By Kayla Blanton and Grace Wehniainen
Rachel Responded To 'Bachelor' Fan Theories About Her TikTok With Clayton
By Grace Wehniainen
Erika Jayne's Estranged Husband Tom Girardi Has Been Indicted On Fraud Charges
By Jake Viswanath
Everything To Know About A Potential 'RHODubai' Season 2
By Kadin Burnett and Brad Witter
Get Even More From Bustle — Sign Up For The Newsletter
From hair trends to relationship advice, our daily newsletter has everything you need to sound like a person who’s on TikTok, even if you aren’t.