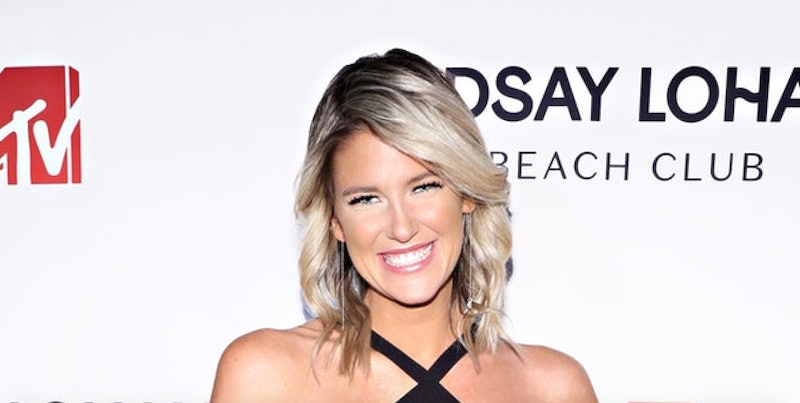 Things are more chaotic than ever at the beach club, and Lindsay and Panos finally decided it was time to let someone go in Episode 7 of Lindsay Lohan's Beach Club. After a brief fake out with May that had everyone confused, that someone turned out to be Jules. So, Jules might not be remember as the hardest working host at Lohan Beach House, but has she continue to work after leaving the show? After Lindsay Lohan's Beach Club, Jules seems to be doing just fine. Maybe even better off entirely.

Jules hails from Michigan, but before joining Lindsay Lohan's Beach Club, she was working as a waitress at Temple nightclub in Denver, per The Know from the Denver Post. But even before that, as Lindsay and Panos often brought up on the show, Jules was actually a model who'd been working in New York City for four years.

On Twitter, Jules already has dozens of loyal followers sharing their support for the model-turned-reality-star after that surprise send-off. One fan even suggested that Jules hop networks somehow and end up on the next season of Bachelor in Paradise, which actually sounds like a pretty solid idea, based on how this Bachelor season is going.

Although some of her fans might be clamoring for Jules to book some more time on television, it doesn't appear from her IMDB page that she has any upcoming roles or appearances just yet. That doesn't necessarily mean she doesn't have anything in the works, though. It's possible she's just biding her time until the end of the Lindsay Lohan's Beach Club Season 1 to announce her next big move.

While Jules might have rebuffed Lindsay when her boss asked her if she still wanted to be a model, Jules's Instagram shows that she has, in fact, gone back to modeling post-Lindsay Lohan's Beach Club. On Feb. 12, she posted a picture of herself during a photo shoot in Greenwood Village, Colorado, with the caption "so wait... do I want to be a model? Or have I been modeling for almost four years now? Hmm... I guess we will find out? but anyways, here’s me from this past week working."

Jules's last post from Temple was back on Dec. 31, 2017, so it kind of looks like she hasn't been working in the nightclub since filming the show. Bustle's request for comment about whether she returned there or not wasn't immediately returned.

In Episode 7, Jules revealed that she does have dreams of creating a brand of her own one day, possibly even a makeup line. Now that she and Lohan have parted ways, Jules did mention on Twitter that she still wants to work on building her own personal brand — whatever that may be.