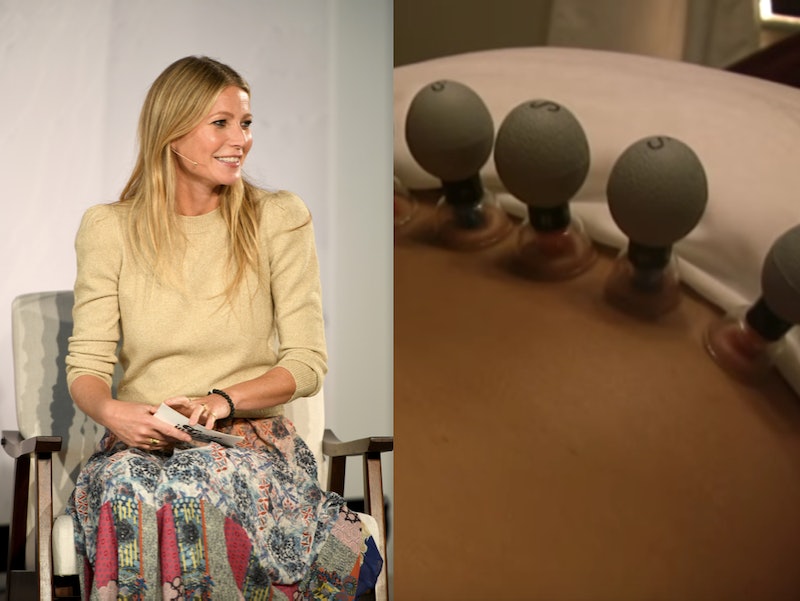 The last thing I expected to think while reading recaps of Gwyneth Paltrow's second In Goop Health summit was, "Huh, I've tried that." But though I, like many folks, couldn't spring for a $650 or $2,500 ticket to spend time with Paltrow (Or "GP," as Goop material refers to her) and have B vitamins injected into my butt, it turns out some parts of the Goop gestalt of health are not as outré as putting jade eggs in your vagina. Reading recaps of the second In Goop Health revealed many new wellness trends, from face cupping to self-hypnosis. But by far the most intriguing was magnetic acupressure, aka the application of small magnets to specific parts of the body. Magnetic acupressure sounds pretty out there, but it's actually a fairly useful treatment (it's one of the many I've tried to get rid of my frequent and debilitating migraines) — and it might be something you'd want to try for yourself.

At In Goop Health, magnetic acupressure wasn't being used for migraine reduction; it was being used to recalibrate people's electromagnetic fields. The type of magnetic acupressure I tried came in small plastic-wrapped packets with one or two sets of magnets that you put in your ears like earrings, with one magnet on each side, squeezing the pressure point — basically the low-commitment precursor to people getting daith piercings for migraine prevention.

Acupressure, as many wellness folks in the wellness community see it, involves going far beyond simple migraine treatments. Camilo Sanchez writing for Acupuncture Today asserts that "[t]he electromagnetic spectrum is a very significant component of the human energy system. It acts as the interface between the physical dimension and more subtle energy fields operating in the body."

Magnetic acupressure is meant to stimulate those energy fields, and one of the "main uses of magnets is to break static and re-establish the [chi] dynamics or flow of the electromagnetic field," Sanchez says. She adds that folks may need magnetic acupressure because "[b]ones and connective tissue are particularly sensitive to energy blockage," which can be caused by "television and computer monitors; various man-made materials (including synthetic clothing); walking on carpet flooring; use of plastic furniture; synthetic building materials; driving your car; traveling in an airplane; and many indoor environments."

For folks who aren't into wellness, that may not be enough to justify snagging a sheet of acupressure magnets. But there have been scientific studies about the observable health benefits of magnetic acupressure. A 2008 review of all the current acupressure magnet literature found that the results of studies completed warranted "further investigation of acu-magnet therapy [...] particularly for the management of diabetes and insomnia."

While magnetic acupressure as a combined therapy may be a little less well-known, magnetic therapy and acupressure on their own are quite well-known, with magnetic therapy still often associated with regulating energy and blood flow in the body, according to Elizabeth Palermo writing for Live Science. The magnetic therapy industry makes over $1 billion per year, the BBC reported in 2006, but despite therapeutic magnets' popularity, "[m]any well-conducted studies over the past three decades have shown that static magnetic devices offer no more or no less benefit than sham devices devoid of a magnet," Palermo wrote.

Acupressure, though, has some proven benefits. Gary Wickman writing for HealthGuidance says acupressure is "able to relax the muscles and encourage blood flow," and that "[i]t has also been shown to stimulate the release of various hormones and chemicals in the body that are beneficial to our overall health." Wickman points out that it's also "natural and non-invasive," as well as pretty dang safe, and that it can be practiced at home.

Whether or not you subscribe to the idea that magnetic acupressure will unlock the energy blockage in your body, trying out acupressure is legit, especially if you have problems getting your body to relax, or suffer from anxiety like I do. And compared to some Goop-approved treatments, magnetic acupressure is a low-risk, low-commitment way to see if "GP" really does know something about health the rest of us don't.