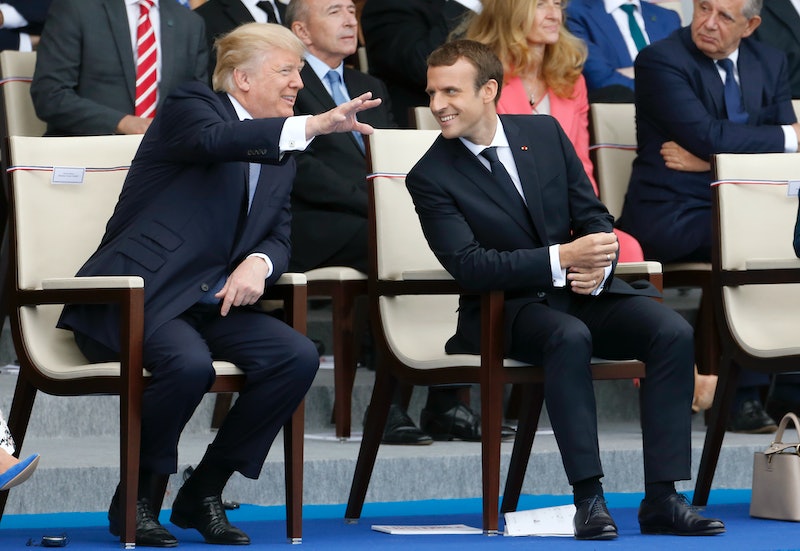 French President Emmanuel Macron has been pretty vocal about his opposition to many of President Donald Trump's policies, specifically Trump's decision to withdraw the United States from the landmark Paris climate accord. After Trump announced the decision in June, Macron said that France would replace every dollar that the United States withdrew for climate change research. Now, Macron appears to be trolling Trump with France's "Make Our Planet Great Again” grant announcements.

Trump's announcement of a withdrawal from the Paris climate accord — a 2015 agreement aimed at combatting global warming — put American climate scientists at a considerable disadvantage. Historically, the biggest chunk of the United Nation's climate research funding came from the United States. But in response, Macron announced that France would offer 18 grants that, for climate scientists based in the United States, would provide research funding as well as all-expense-paid relocations to France.

The grants, called "Make Our Planet Great Again," riff on Trump's now-notorious campaign slogan, "Make America Great Again." The winners of the French grants were recognized Monday, to coincide with the "One Planet Summit" co-hosted by the U.N. and the World Bank and held in France. Trump was not invited to that summit, according to ABC News. The scientists invited to France will conduct their research at French universities and funding will be used to cover a 3-5 years period.

The French grants are likely much-needed in the climate science community, which has come out hard against Trump's policies (or lack thereof) regarding climate change. According to France 24, a huge chunk (1,123) of the 1,822 applications for the grants came from the United States, along with Poland, Italy, Canada, Spain, and India.

Eighteen climate scientists, 13 of them based in the United States, were officially awarded the grants (worth between a reported €1 million and €1.5 million each) on Monday. The grants will be used to fund research regarding how climate change impacts natural disasters as well as its effect on the economy.

Macron was critical of Trump’s decision to withdraw from the Paris Agreement from the beginning. In fact, in November, he announced that France would cover the U.S. share of funding for the U.N.'s Intergovernmental Panel on Climate Change panel. Prior to Trump taking office, the United States had given the IPCC roughly 2 million euros a year.

Also in November, Syria officially joined the Paris Agreement, making the United States the only country to disavow the deal. The reaction from scientists was overwhelmingly negative, with some saying Trump's decision was "irresponsible and callous" as well as "arrogant" and "reckless." Katharine Hayhoe, the director of the Climate Science Center at Texas Tech University, told the science journal Nature that "the biggest loser from the decision could be the United States itself," as the agreement is not just a climate treaty, but "a trade agreement, an investment blueprint and a strong incentive for innovation in the energy and the economy of the future."

Trump himself has vacillated on climate change (which the scientific community agrees is very real), once tweeting that "the concept of global warming was created by and for the Chinese in order to make U.S. manufacturing non-competitive." When Trump withdrew the United States from the climate accord, the White House refused to confirm whether or not Trump still believes global warming to be a hoax.

In announcing the withdrawal, Trump said that the Paris Agreement was "very unfair, at the highest level, to the United States," adding that he "was elected to represent the citizens of Pittsburgh, not Paris." Trump also claimed that the withdrawal would ensure that "other leaders and other countries" will no longer be "laughing at us any more."

Macron, on the other hand, has been an ardent supporter of climate research. In February, he posted a video to Facebook telling U.S. researchers and engineers that they are "welcome" in France. "I do know how your new President now has decided to jeopardize your budget, your initiatives, as he is extremely skeptical about climate change," Macron said in the video. "I have no doubt about climate change and how committed we have to be regarding this issue."

He added a few subtle digs clearly directed at Trump, saying, "Please, come to France you are welcome. It's your nation. We like innovation."