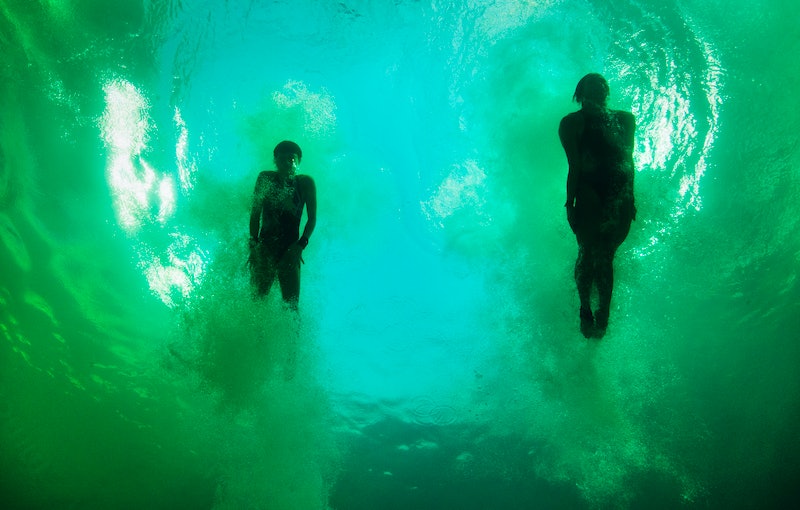 If you're a water baby, one of those people who can't be dragged out of the sea at the end of a day at the beach, and would rather be doing lazy laps of a lake than virtually any other summer activity, it seems there's an evolutionary reason for your happiness. Humans, like other vertebrates, have what's called the mammalian diving response: an innate physiological reflex that "flicks on" when we're submerged in cold water, or even do something as simple as splash some fresh H2O on our faces. And it turns out, it's a pretty neat hack for calming your anxiety quickly.

When we enter cold water, whether it's the sea or a freezing pool, our bodies change in some pretty interesting ways thanks to this response, which is also sometimes called the mammalian diving reflex. An experiment in 1962 on free divers, who reach gigantic depths in open water without the aid of breathing equipment, found that encountering water changed the divers' heart rates. Their heart rates slowed down enormously, even when they were at great depths doing very vigorous things like swimming as fast as they could. Slowing down your heart rate — through things like breathing exercises — is a tried and true method for lessening the impact of anxiety, so by utilizing this reflex, it's possible to kick-start that process. Thanks, science.

But in order for it to work, you have to be all-in. The reflex is stimulated not by dipping our toes in water, but by diving into it — in other words, by covering our faces with water and simulating not being able to breathe. In 2015, scientists noted that the reflex stems from signals sent by the trigeminal nerves all over the face. When the trigeminal nerves detect water all over the face, they send a message to the vagus nerve, which connects the brain to the body and, among other things, regulates heart function.

There's another aspect to the mammalian diving response, too: an increased ability to withstand pressure. In real terms, this means that freedivers' lungs and other internal organs are able to function pretty normally despite being pounded from outside by the higher pressure of deeper water because of something called peripheral vasoconstriction. In people who are experiencing the mammalian diving response, blood flows away from the skin and limbs to protect vital organs like the heart and brain, while the spleen contracts and expels red blood cells to help the body survive without breathing. The blood around the organs protects them from being crushed — at least as much as it can.

Humans only use their mammalian diving response when they're in contact with water, particularly when fully immersed (or when they're doing synchronized swimming), but other mammals like seals and whales use it every day, because it's an evolved method for surviving long periods at underwater without suffering too much from excessive water pressure. It's also been observed in rats and mice, and it's thought to be a good evolved response to help mammals, who may or may not be able to swim, cope without oxygen.

So, if you've ever wondered why you feel better after splashing water on your face during a panic attack, you now have the biological reason behind it. The water's stimulation of the trigeminal nerves is prompting your heart to slow down, in case you happen to be taking a dive any time soon. (And yes, our nerves can easily distinguish between a splash of cold water and, say, rain, or a blast of cold air.) The body is a weird, wacky, wonderful thing.