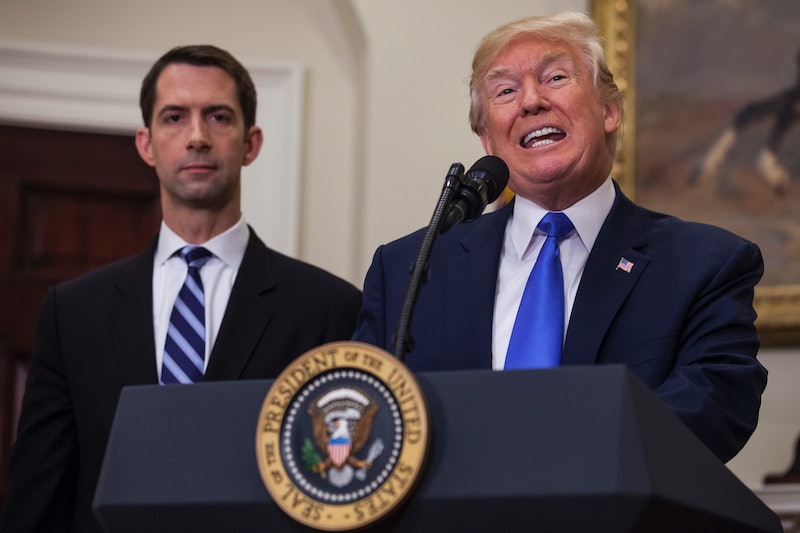 On Wednesday, President Donald Trump announced his support for a bill co-authored by Republican senators Tom Cotton and David Perdue, one which would have a huge impact on rates of legal immigration into the United States. And it's already drawing a huge amount of scrutiny and criticism over the qualities it would seek out and favor in green card applicants ― if you're wondering what "merit-based immigration" means, the RAISE Act is helpfully unsubtle about what it hopes to achieve.

In broad terms, the RAISE Act would drastically slash the total number of legal immigrants entering the U.S. on an annual basis. According to Cotton, it would likely reduce the number from about 1 million annually to 600,000 next year, and down to 500,000 over the course of a ten-year window. It would accomplish this, in part, by adopting a more strident and selective applications process, favoring people who speak English and are more financially stable over lower-income, non-English speakers.

To many progressives and anti-racism activists, this is a hugely controversial and inflammatory idea, both because economically stable English-speakers tilts the process in favor of white and relatively privilege applicants, and because of what it says about America's core principles regarding immigration. Advocates for legal immigration and for undocumented immigrants' rights alike generally want to extend the opportunities of American residency to newcomers regardless of ― or in many cases, because of ― socioeconomic strife present in their countries of origin.

It's a matter of principle as much as anything, spoken to by Emma Lazarus' famed poem inscribed in the base of the Statue of Liberty, which imagines Liberty herself beckoning to the world's most impoverished and suffering people.

Give me your tired, your poor, your huddled masses yearning to breathe free, the wretched refuse of your teeming shore. Send these, the homeless, tempest-tost to me, I lift my lamp beside the golden door!

The Trump view of "merit-based immigration," however, is quite a different vision. Speaking from the White House with Cotton and Perdue at his sides, the president lauded the bill for favoring applicants of relative financial and educational privilege, as well as prohibiting recent legal immigrants from receiving welfare.

The RAISE Act ends chain migration, and replaces our low-skilled system with a new points-based system for receiving a green card. This competitive application process will favor applicants who can speak English, financially support themselves and their families, and demonstrate skills that will contribute to our economy. The RAISE Act prevents new migrants and new immigrants from collecting welfare, and protects U.S. workers from being displaced. And that's a very big thing, they're not going to come in and just immediately go and collect welfare, that's not going to happen under the RAISE Act. They can't do that.

In a tweet after the announcement, Illinois Democratic senator Dick Durbin blasted the RAISE Act, calling it "nothing more than a partisan ploy appealing to the racist and xenophobic instincts Trump encouraged" during his 2016 presidential campaign.

For what it's worth, the current math in the Senate means the bill is unlikely to ever become law. As it stands now, the GOP controls 52 Senate seats, but it would take 60 votes to break a Democratic filibuster and bring the RAISE Act up for debate. As such, the Republicans would need to convert eight Democrats and independents to their side, which given the highly charged racial and cultural nature of the bill, seems unlikely in the extreme.