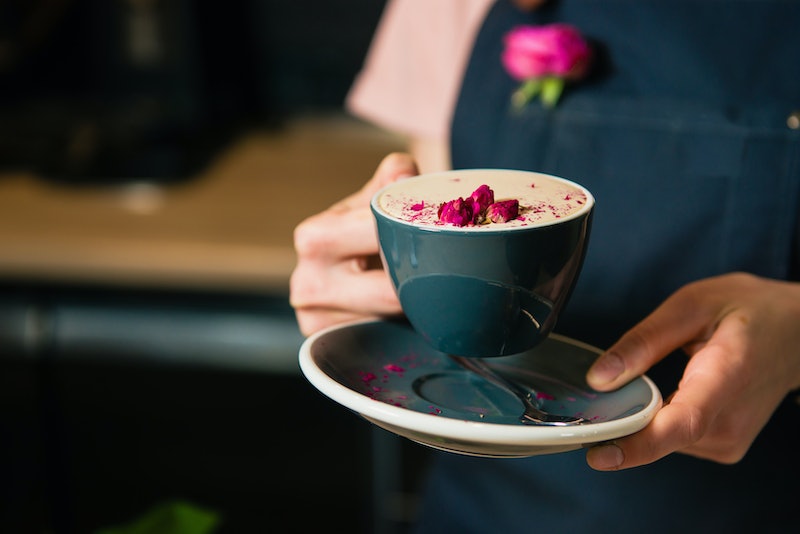 Posting a picture of what you're eating and drinking is practically an art form. It's not always easy to make your latte look aesthetically pleasing, which is why moon milk is the latest Pinterest and Instagram trend people are obsessed with. It's pretty enticing: Not only is it prettier than your average coffeeshop drink, but it's also said to help with sleeplessness and stress. But although moon milk is supremely trendy, it has cultural significance that can't be ignored.

Drinking a mug of warm, herb and spice-infused milk to help you sleep has been a tradition for centuries, and it dates back to Ayurveda, a medicine tradition that originated in India, according to Bon Appétit. The food magazine's moon milk recipe includes cinnamon, turmeric, cardamom, coconut oil, nutmeg and black pepper, so if you have a reasonably stocked spice cabinet, you probably already have a lot of the ingredients at home. You may need to make a grocery store run for ashwagandha, which is an adaptogenic herb commonly used in Ayurvedic medicine. You can also order it online from Amazon or even Nordstrom. But even though it's trending on social media, the rich history of the drink makes it more than a Pinterest-perfect recipe to try.

Most viral trends that pop up have a relatively short lifespan in the grand scheme of things. After all, it's difficult to remember much when more than millions of posts are shared online every 60 seconds. But unlike glitter cappuccinos or cheese tea, moon milk has longstanding cultural significance. That's part of the reason that it's been a staple in parts of India for centuries. And even though Americans are falling in love with moon milk, it's worth noting that it didn't originate here.

Before you rush to Instagram to join the 3,400 people who have posted about #moonmilk, you should take the time to acknowledge the cultural roots and the implications of Western culture discovering a drink that's existed for thousands of years. As The Globe and Mail notes, it's problematic for Americans to discover southern Asian recipes and claim them as their own. The Canadian publication mentions haldi doodh, an Indian drink that's known as golden milk in the West, that has fallen into an all-too-familiar cultural trap: when people of Indian heritage make the hot drink, it's deemed "exotic"; when white people do the same, it's suddenly a superfood-infused broth that everyone needs to try.

That's not to say that moon milk can't be enjoyed by everyone — but it's important to be aware of whether you're potentially contributing to the appropriation and educate yourself on what you're consuming and why it matters to those who still practice Ayurvedic medicine.

In that same vein, Food52 has a masterful essay from writer Mayukh Sen that explores the roots of turmeric milk and why it's problematic to assume that everyone from India — a nation with 1.3 billion residents — is intimately familiar with turmeric-based lattes. Sen's opinion piece explores his experience ordering a turmeric latte at a hip coffee shop and what that means for him given his heritage. An excerpt from his essay is below.

Indian food, sans scare quotes, remains distressingly misunderstood, enormously simplified, its valences smoothed over to fit a rubric imposed upon it by restaurants. Perhaps reckoning with vastness requires oversimplification. There will always be a gulf between what dominates greater cultural understandings of a country's foods and the culinary truths we hold in our homes.

Essentially, moon milk — like many other trends that develop and veer on cultural appropriation — is more complex and nuanced than it seems on the surface. It's tempting to brew up a cup without considering the history of the drink, but educating yourself will help you avoid causing undue disrespect and harm.