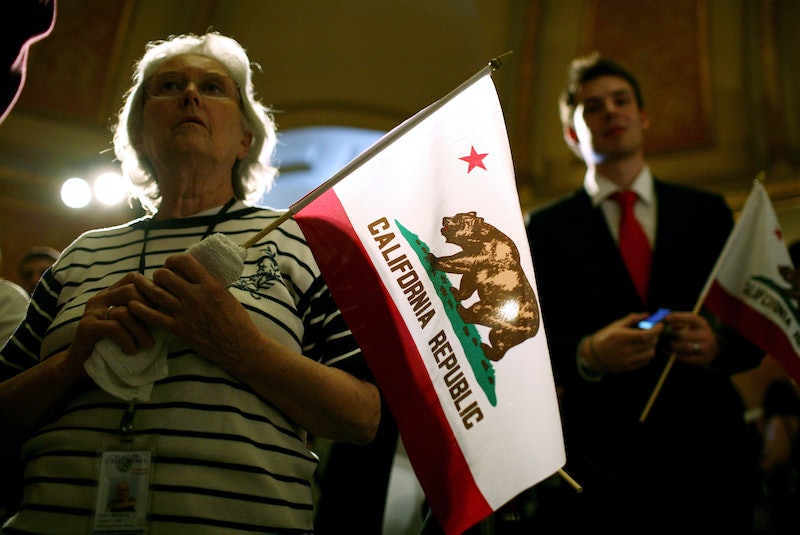 When it comes to the topic of splitting California up, it's not a new one — but one group has gone a step further to make their dream of two Californias possible. Those campaigning for the New California state published a declaration of independence on Monday, demanding a new government "by the people and for the people under God."

According to the group's vice chairman and conservative commentator Robert Paul Preston, New California would still be part of the U.S., but a separate state from California. Its idea is for the latter to contain cities in the outer and coastal urban strip, like Los Angeles. The remaining and much larger part of the Golden State, including its rural parts, would be New California, Preston said.

According to CBS Sacramento, the founder said that California has been "ungovernable for a long time," adding:

High taxes, education, you name it, and we’re rated around 48th or 50th from a business climate and standpoint in California.

Preston's group says the New California campaign would be "exercising its constitutional right" to split from the rest of the state. The need for New California, according to its founders, is to "throw off the bonds of tyranny." In a document declaring its independence, the group said the imaginary state would be for "people who are suffering the long train of abuses and usurpations at the hands of a tyrannical government." You can read the entire document here.

Preston's dream for a New California has been met with mixed responses on social media, with many people criticizing the campaign as a conservative group's effort to leave the liberal state and to pay lower taxes. One Twitter user wrote that "New California is an effort by conservatives to split up California and gerrymander their own state to earn electoral votes and gain extra Senate seats. It is never going to happen."

Another Twitter user said, "Let me get this straight. Republicans make fun of us for having college safe spaces all the time but now all of a sudden they want to break away from California to make this new California crap so they can live in a conservative only bubble and we’re supposed to be okay with it?" Others have approached the New California effort with ridicule.

Again and again, Preston's New California idea has been criticized as an extremely conservative utopia. In 2016, Preston delivered a speech on his demand for a "State of Jefferson," a demand made by some conservatives on the West Coast. One of the supporters for such a state described his peers as "a bunch of Bible-thumpin’, gun-totin’, wild-eyed pistol-wavers" in The New York Daily News.

According to Preston, a New California would probably have a population of 15 million compared to California's 25 million. It would be, according to the document, the sixth largest state "behind New York [and] bigger than Illinois and Pennsylvania." And in terms of representation in politics, a state like New California could have 25 to 27 seats in the United States House of Representatives.

With all of that said, it's unlikely that New California will ever come into existence. At least for now. In order to obtain statehood, Preston's group will need approval from the California legislature. It will also need a thumbs up and green signal from the Congress — which is unlikely. Then there's the lengthy and exhausting process of dividing resources and assets among the split states. And finally, the group will need a governor appointed by the president of the United States. In other words, it's no easy task.