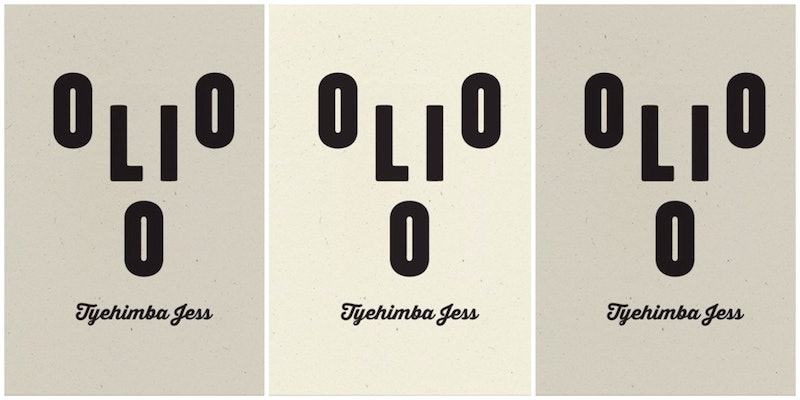 The Pulitzer Prize for Poetry is awarded annually to "a distinguished volume of original verse by an American author," and this year that writer is Tyehimba Jess for his book Olio. Jess is an alum of NYU and the Cave Canem program. His writing has previously been honored by the National Endowment for the Arts and the Provincetown Fine Arts Work Center. He teaches at College of Staten Island.

Unlike other major literary and journalistic prizes, nominated finalists were not revealed ahead of the Awards — (two finalists, will be named shortly). Now that the speculations for who will take home the literary awards are behind us, we can concentrate on getting Olio in our hands.

Tyehimba Jess joins the ranks of an impressive crew. The Pulitzer in Poetry was established in 1922, and a list of previous winners is a veritable who's who of American poetry. From Edna St. Vincent Millay to Robert Frost, Robert Lowell to W.H. Auden, Wallace Stevens to Sylvia Plath, the Pulitzer has honored writers young and old, for books singular and comprehensive. Recent winners include Tracy K. Smith, Rae Armantrout, Gregory Pardlo, and Vijay Sheshadri. The winner receives a $10,000 prize and attends a luncheon in May at Columbia University, but the real takeaway is the clout and recognition associated with what many consider the country's most prestigious literary award.

Tyehimba Jess joins the Pulitzer's 101st class with his second book, Olio, an expansive exploration of the often unsung Blues musicians who defined American musical culture prior to the Harlem Renaissance. On NPR, Craig Morgan Teicher said of Jess: "He sings and swings through the last 200 years, introducing a pair of blind pianists, Scott Joplin, and a dozen others, tuning our ears in." Publisher's Weekly gave Olio a starred review, calling it: "Encyclopedic, ingenious, and abundant."