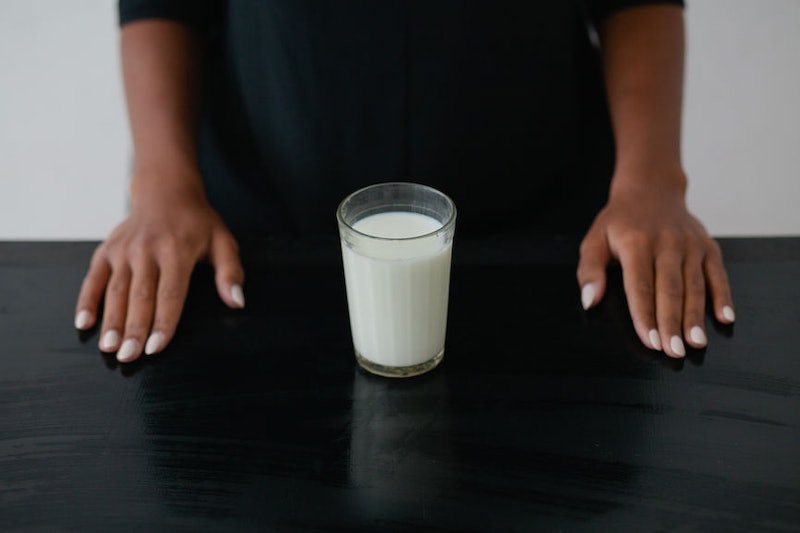 Milk. In years gone by, cow's milk was all you could buy. Then goat's milk came along. And then an onslaught of nut- and plant-based milks entered the fray. There's oat, almond, and now pea. Yes, you did read that right. "What is pea milk?" I hear you ask. Well, don't wrinkle your nose just yet, because it's not a green vegetable-tasting liquid. In fact, it's a pretty revolutionary new drink.

Pea milk has been around in the U.S. for a few years, but it is now making its way overseas to the UK. Whole Foods has announced that a pea milk made by a new brand called The Mighty Society will be launching in stores this month. It's not surprising that the retailer has decided to launch an entire new type of milk. A 2017 Mintel report found that UK plant-based-milk sales had risen by 30 percent since 2015. (Almond milk proved to be the most popular, making up two out of every three pints sold.)

So, why exactly should you bother to try pea milk? Well, it comes with quite a few hidden benefits. As Metro reports, pea milk has double the amount of calcium than cow's milk (and 40 percent less sugar), and eight times more protein than a glass of almond milk.

In terms of the environment, it could well be revolutionary. Cows are already renowned for being bad for the environment. Couple that with the amount of water traditional milk production uses up and you've got a pretty unsustainable process.

Those who are prone to dietary intolerances may also find pea milk intriguing. It contains zero dairy, zero nuts, and zero soy, making it ideal for anyone struggling to find milk that doesn't aggravate allergies. Flavour-wise, you've got more than one option. Mighty Society's pea milk is set to be available in original, vanilla, chocolate, and unsweetened flavours.

As with anything, there are a few things to watch out for. Healthline notes that some flavours of pea milk can be high in sugar, while Dr Hazel Wallace told the Evening Standard that plant-based-milk drinkers should ensure that it has been fortified with vitamins and minerals. (The Mighty Society's includes calcium and vitamins D and B12.)

Wallace also said: "If you have no problem consuming dairy, i.e. you don't have any intolerances or ethical issues with it, then I would say drink cow's milk, because it's such an important source of protein, calcium, and iodine," she told the paper. "But I'm very aware that lots of people are going towards a plant-based diet for health and environmental reasons, which is absolutely a positive thing."

And what about taste? Well, you'll just have to find out. Only kidding, Healthline reported that Ripple's pea milk has a "richer, creamier texture" than other plant-based milks, so expect a similar taste from The Mighty Society.