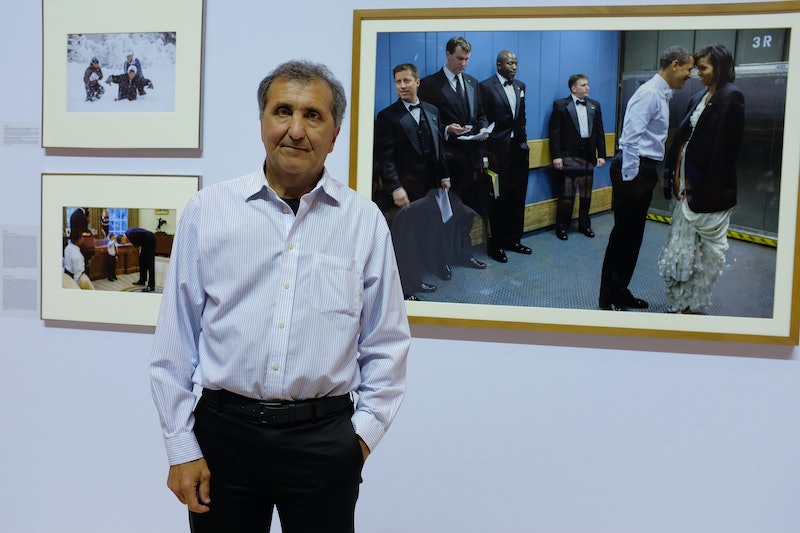 If you didn't know who he was before the 2016 presidential election, you definitely know who he is now. He's famous for posting throwback Instagram photos from his time working as the Obama administration's formal White House photographer, and what Pete Souza is doing now builds on that experience. In other words, he's making the most of his portfolio.

Publicly, much of what Souza has been doing focuses on piecing together the work that he has already done. Back in 2017, Souza released a book featuring some of his favorite photos of President Obama. Entitled Obama: An Intimate Portrait, the book was exactly what it sounds like. It featured photos from both of President Obama's terms in the White House, and it was a New York Times best seller.

"I was there all the time," he told NPR while reflecting on some of his most iconic images. "I wasn't talking to [Obama] all the time, but I was always in every meeting and pretty much every situation that he had as president."

In 2018, Souza released a second book, though this one carried a controversial message. Juxtaposing President Obama with President Trump, the book was called Shade: A Tale of Two Presidents. It built on his current Instagram presence, and is basically the print version of what he's now famous for doing online: throwing shade at the current president.

Hailing from the whaling village of New Bedford, Mass., Souza has a storied career of photographing commanders in chief. Though definitely accomplished either way, he sprang into millennial consciousness as apps like Instagram made it easier than ever for professional photographers to share their work. (He reached 2 million followers on Instagram just this past August.) But Souza was doing his thing long before hashtags and re-grams. Back in the 1980s, Souza was a staff White House photographer for another famous president, and a Republican one, at that. From 1983 to 1989, he chronicled President Ronald Reagan's administration from the inside.

Working so closely with some of the highest profile people in the country, Souza has been witness to some pretty amazing moments — some, even, that no one else was present for. For example, he was the only photographer present when Obama was sworn in for the second time, and he was also the only photographer allowed to document Obama's first day of work in the Oval office, according a Washington Post report from the time.

There's no doubt that Souza has impacted U.S. history by way of documenting Obama's time in office. His photos captured the many emotional experiences of the presidency, from the Situation Room to laying on the floor, playing with babies. The dynamism of Obama's personality may never have been so clear if a photographer had not been present to capture each of those moments. And though Souza isn't photographing these White House moments anymore, he's most definitely still on the radar.

More like this
Are John Legend & Kanye West Still Friends? The Singer’s Latest Update Is Candid
By Brad Witter
Christina Aguilera Took A Powerful Stand At Brighton Pride
By Sam Ramsden
'Scream’s Courteney Cox Has Broken A Major Horror Record
By Sophie McEvoy
Kim Kardashian & Pete Davidson’s Relationship Timeline From Start To Finish
By Jordyn Tilchen and Bustle Editors
Get Even More From Bustle — Sign Up For The Newsletter