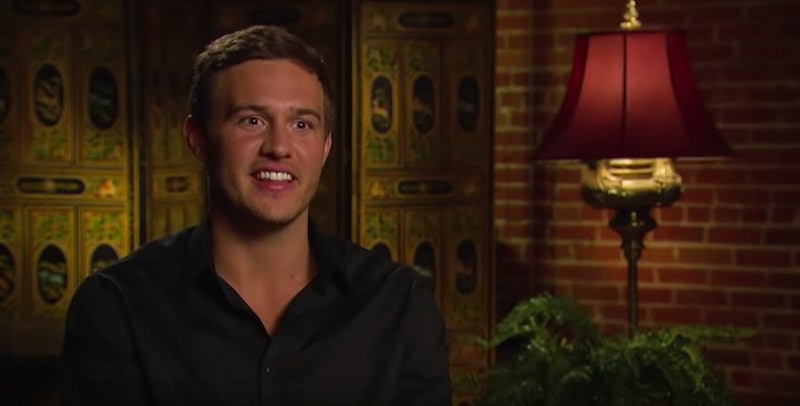 Hannah's Bachelorette season began filming in March, directly after Colton's finale aired. She then finished filming in May — ahead of the May 13 premiere — which means it's been some time since she's picked her winner. Whether or not she picked Pilot Pete won't become clear for a few more episodes. In the meantime, after The Bachelorette, Peter has gone back to work.

Bachelor Nation stars don't always return to their original jobs after appearing on the show. Sometimes they start podcasts, sell things on Instagram, write books, go on other TV shows, or any other number of things besides going back to a 9-to-5. But Pilot Pete, as he's become known amongst fans, is sticking to his name (that's his Instagram username, too). In his Bachelorette premiere intro, Peter said, "I've always wanted to be a pilot, ever since I was a little kid," and he is! So is his dad and his brother. Flying runs in Peter's family, especially because his mom and dad met when his dad was a pilot and his mom was a flight attendant, according to his ABC bio. So it's no wonder that Peter wasn't in a rush to give that up after being on Hannah's season.

Peter has only posted six photos to Instagram since returning from filming, and half of them have some reference to flying. Most recently, he shared a photo of himself in front of a plane with the caption: "A mile of road will take you a mile. A mile of runway will take you anywhere."

His only Instagram Stories Highlight is titled "Flying" and features, what else, an airplane. He also recently posted a photo with his Delta crew, showing him back at work even as his episodes have been airing. "Keep Climbing," he wrote in the caption, referencing the Delta slogan. "If we could fly you anywhere in the world, where would you like to go??"

Peter hasn't only been up in the air since coming back from wooing Hannah. Some of his other posts show him promoting the show — albeit with flight-related puns. "Buckle up, adventure calls," he wrote. "Tune in tonight at 8pm PT on ABC to see if I can find my copilot."

Peter has also been hanging with his dog, Tripp, getting in some much-needed cuddle time after weeks away.

And he posted a video to Instagram for Father's Day that featured him, his brother Jack (also a pilot), and his dad all flossing. "Happy Father's Day Captain," Peter wrote.

Even though Peter's been having some fun since coming home, it's clear that his heart is mostly in his work. Peter has a job that he's loved since he was a kid, and it makes sense that he doesn't want to give that up just because he went on reality TV. But he may get to take another break from his career soon, because a ton of viewers want him to be the next Bachelor if he doesn't get that final rose.

And many of those fans also want to sign up for the show should Peter become said Bachelor.

There are still several episodes left in Hannah's season, and she could have picked Peter as her fiancé. But even if Peter went home roseless in the end, at least he has a job he loves and a potential spot as the next Bachelor. He'll find his co-pilot one way or another.