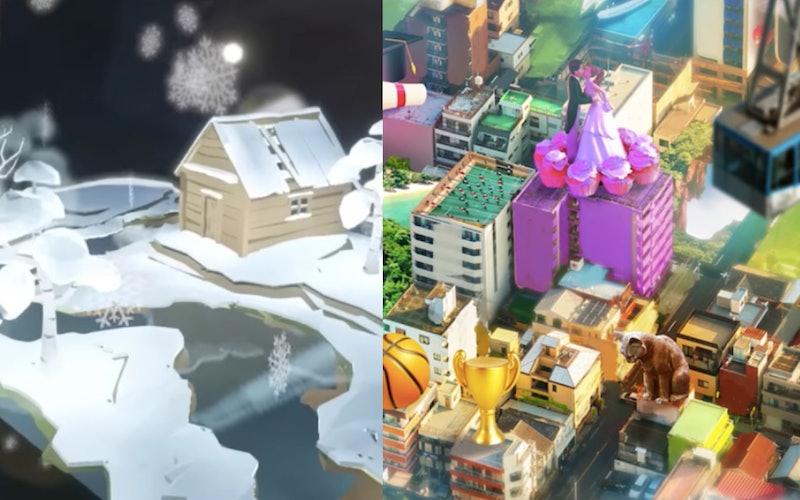 For years, The Sims has allowed us to create, cultivate, and observe the everyday lives of our very own digital people. It's also the game that comes with incredible patch notes like "Sims who are on fire will no longer be forced to attend graduation before they can put themselves out" and "Sims can no longer 'Try for Baby' with the Grim Reaper." But now Will Wright, the creator of The Sims, is working on a game called Proxi where you'll be able to play in scenes rendered from your own memories, thanks to the power of artificial intelligence (AI).

That's right. It's scheduled to be released for mobile devices later this year. On Proxi's website, developers describe it as "an experiment for the player to create and tune their own personal AI, their own Proxi." Players will interact with Proxi to create "Mems" — "the core building block in the Proxi mind," developers explain. A Mem "can have a look, a sound, and is represented by core concepts in the Proxi brain. It develops the language and personality of the player's Proxi."

Mems will come together to build scenes from your memories. In the game's announcement video, Wright says that "in some sense, [Proxi] is a game of self-discovery. A game where we actually uncover the hidden 'you' — your subconscious, your inner id — and bring it to the surface, bring it to life, so that you can interact with it, you can play with it, you can learn from it, and it can learn about you."

The announcement video shows a few different rendered scenes which increase in the level of detail, including a simple one-room scene where a person is shown dreaming, a scene showing the outside of a snow-covered cabin, and then scenes showing complex cityscapes.

In order to help develop Proxi's visuals, Wright and his team at Gallium Artists are looking for an artist that can help them "bring [Proxi] to life, to manifest these memories as tangible, visceral gameplay elements." According to Digital Trends, artists who want to enter the contest will need to take three of their own memories and render them in separate environmental scenes.

"Along with this, you’ll need to get all the scenes running in Unity to create a video, and you’ll need to submit an article detailing your creation projects," Digital Trends reports. "The art assets created must all be done by you, and they cannot be something you designed previously."

According to Digital Trends, "Two winners will receive a grand prize, which includes round-trip flights to San Francisco to meet the development team, a private dinner and interview with the judges, licenses for Allegorithmic and Marmoset, and a bundle featuring shirts, games, and stickers from Wright’s projects."

Though the mechanics of how Proxi will learn about its players haven't been made super clear yet, the About page on Proxi's website shows a chatlike interaction. If that sticks around for the final game, its AI-player interaction will be highly reminiscent of Replika, a mobile app where users can create their own unique AI conversation partner. In Replika, your AI learns about you from your conversations, and slowly changes based on what you teach it. Yes, it's a little eerie. But it's also pretty amazing.

Proxi's concept seems even loftier: To be able to fully render our own memories and turn them into scenes you can interact with. And while you may think it will be difficult to immerse yourself in your recreated memories on your iPhone, just think about the potential future virtual reality applications of superpowered technology built on Proxi's foundations. It's possible Proxi is a small glimpse at what virtual life could be like decades from now — and that is downright cool.