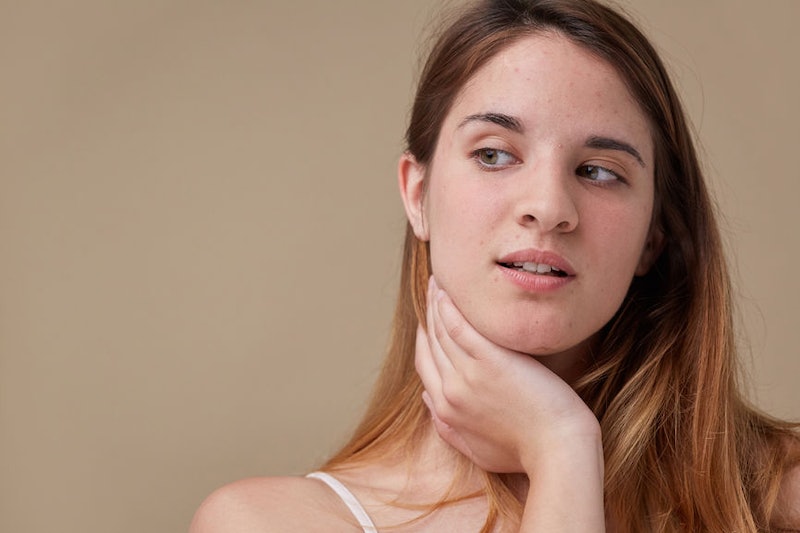 A few years ago, I went on a beautiful Greek holiday with my mum and sister. Sadly, I didn't get to experience much of it. A few weeks before we jetted off, my skin went from relatively okay to something that I could barely bring myself to look at in the mirror. Deep red patches (some lumpy, some not) appeared on my cheeks. No matter how many products I used, the discolouration remained. A specialism that mixed dermatology with psychiatry would have really helped. Little did I know that it already existed. But what exactly can psychodermatology do?

As psychodermatology specialist Dr. Alia Ahmed explained to Dazed, the field aims to treat skin conditions holistically. "It acknowledges the effect of the skin on the psyche and vice versa," she added, stating that patients may have a dermatological issue that results in a psychological problem such as eczema or a psychiatric disorder that comes with skin symptoms like obsessive skin picking.

Although it sounds like a massively modern thing, studies examining the link between the mind and skin have been ongoing since the 1930s, reports Fashionista. You may even think it's all mumbo jumbo designed to take people's money, but experts will assure you it's not. "The skin and the brain are made from the same embryonic layer. Of course they have a connection — they're wired together, essentially," Dr. Amy Weschler told Fashionista.

It's pretty obvious when you think about it. Emotions like stress and shock can easily result in skin-related pandemonium and a quick trip to Boots for the latest spot remedy treatment. Yet a trip to a GP or skincare specialist rarely involves a conversation about what triggered the problem. (I believe my bout of rashes and breakouts stemmed from the break-up of my parents' marriage plus a career crisis.)

In 2011, a national survey led by the British Association of Dermatologists found that 85 percent of dermatology patients said the psychosocial parts of their skin condition were a "major part of their illness." Almost a fifth admitted to needing psychological support to help with the mental distress caused by their skin. As Elle reports, 10 million people in the UK are now thought have been psychologically affected by a skin problem.

Dermatologist Dr. Anthony Bewley, who started the UK's first psychodermatology clinic in 2002, sympathises with patients who are yet to receive holistic care. “I see patients who have been told by their GP that it’s 'only eczema' or it’s 'just acne'," he told Glamour. “But that makes them feel disempowered and helpless and it adds to the problem rather than deconstructs it. We should never underestimate or trivialise a skin condition.”

So what does a psychodermatologic approach involve? A combination of psychotherapies with traditional skincare products, it turns out. Cognitive behavioural therapy (CBT) is common for those who want to learn why their skin behaves the way it does and adapt their mind to suit. Sometimes, psychiatric medications are prescribed if symptoms are particularly severe.

Currently, there are only eight specialist clinics offering psychodermatology services in the UK, wrote Dr. Ahmed in the Daily Mail. Your GP can refer you to one, but be warned that waiting lists can be anything from a few weeks to an entire year. Experts hope, however, that the more we talk about the specialism, the more attention and therefore funding it will receive.

My skin troubles eventually went away. But even if a specialist couldn't have "fixed" the problem, it would have been nice to talk about it without being shut down. With that in mind, I'm sure I'm not the only one hoping that psychodermatology continues to grow.

If you are experiencing psychological distress related to a skin condition, visit Skin Support.

More like this
Jecca Blac’s New Brow Drop Was Inspired By Your Fave Drag Queens
By Justine Knight
17 Brilliant Beauty Advent Calendars You’ll Want To Snap Up For Christmas 2022
By Justine Knight
The Body Shop’s New Range Has More Antioxidants Than Retinol
By Justine Knight
19 Latinx Therapists & Mental Health Experts To Follow On Instagram
By Kaitlyn Wylde, Naydeline Mejia and Lexi Inks
Get The Very Best Of Bustle/UK