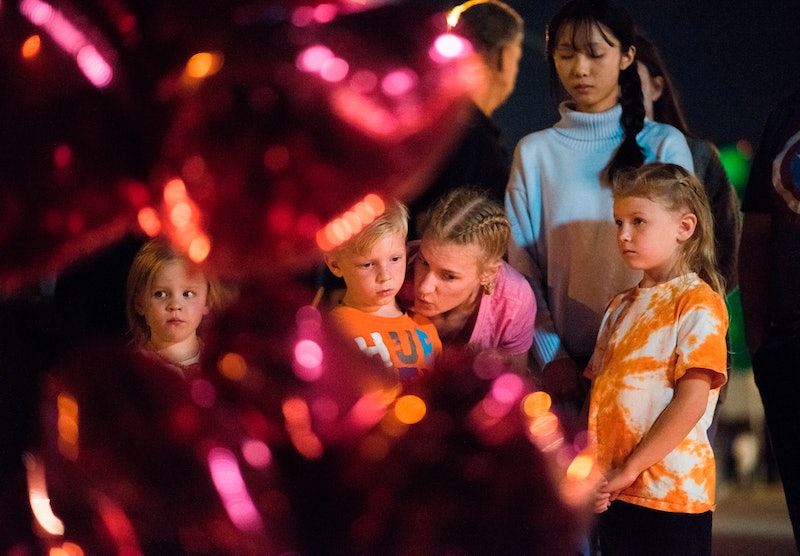 In the days following a mass shooting, like the one we witnessed in Las Vegas, a specific narrative tends to emerge surrounding the perpetrator, and specifically the mental health of the perpetrator. With Trump referring to the shooter as “sick” and “demented,” an offensive shorthand for “mentally ill,” this narrative, based on fallacious logic — that those who carry out these horrific acts are mentally ill, and therefore mentally ill people are violent, neither of which is true — is playing out again on the national stage. It’s been shown time and again that this narrative is not based in fact and contributes to stigma against people with mental illness, and is therefore rejected by many onlookers who have, instead, begun examining the link between the gunman and his past history of violence, especially toward partners.

But according to one psychologist, there’s another, more insidious narrative — or rather, lack of narrative — that also comes out after these events, and it can have lasting consequences for the people who survive traumatic events. In the aftermath of mass trauma events, which are becoming not only more common, but more dangerous, we need to focus on the psychological wellness of survivors, rather than make judgments about the mental health of the perpetrator. Lata K. McGinn, PhD, a clinical psychologist at Cognitive and Behavioral Consultants, argues that we need to be using psychological first aid in addition to medical first aid in a trauma situation, in order to mitigate psychological harm. “The damage [of a mass violent event] goes beyond the individuals who died, and the individuals with injuries,” McGinn tells Bustle. “[When I heard about Las Vegas], I felt so much pain for the people who were going to suffer from it, the people who died, and the people who have to cope with this tragedy — the families and friends, too."

McGinn is referring to the lasting psychological effects of experiencing a traumatic event, like a mass shooting, which can affect people connected with the tragedy in different ways — like Post Traumatic Stress Disorder (PTSD). She’s seen what can happen, psychologically, in the aftermath of violent events: After 9/11, McGinn was part of a task force that created guidelines for practitioners and survivors to help “normalize” the trauma reaction once the patient’s basic needs were met. “The goal in the beginning is to say [that] whatever you're feeling is normal,” McGinn says, adding that any suggestion that the survivor may be at risk of developing PTSD, actually puts them more at risk of developing the disorder. A major (and underreported) stigma surrounding people who experience traumatic events is that people “assume that everybody who has experienced a trauma will never recover,” says McGinn, but that’s simply not true.

“Everyone who has a traumatic reaction does not” go on to develop PTSD, McGinn says. “There’s a lot of research about what kind of traumatic events, how close you are to the trauma, and then there are other risk factors, like what their family history is, and their own individual psychological history.” When there is a “mass violence like this, when someone has the intention to kill, as opposed to a disaster that’s an accident — it puts people at greater risk for developing adjustment issues to the trauma.” Additionally, people with PTSD continue to experience particular stigma that they aren’t “strong enough” to cope with the effects of a traumatic event, a stigma which is profoundly untrue and hurtful toward people who do develop the disorder. Managing risk factors for PTSD is crucial in a world where mass acts of violence is thought of more and more as a fact of life.

The point is, though, that in the aftermath of particularly senseless traumatic events — as when, at the time of publication, the Las Vegas gunman’s motives have not yet been discovered — the narrative tends to focus on the mental health of the perpetrator, or their past propensity for violence; on stories of the victims’ heroism, or on renewed (and ignored) calls for gun control. All these threads are important angles of a nuanced discussion of how we, as a country, respond to the public health crisis of mass trauma, but they’re missing the conversation we need to have about the mental health of those who are left behind. “The fact that there’s a need for a conversation, i.e. [because] a mass shooting occurred, is very sad,” says McGinn. However, if this is a moment where we can discuss the mental health impact — on survivors — of this mass shooting epidemic, it can become a moment of productive reconciliation. “Hopefully, it doesn't become a conversation only when tragedies like this happen,” says McGinn.

It’s important to talk about responses to trauma every day, and not just when violent tragedies happen. Normalizing PTSD goes a long way toward reducing stigma, which might in turn reduce the risk of developing the disorder in the first place. But this story often gets overlooked amid the many necessary conversations that happen after a large scale tragedy, and that, unequivocally, needs to change.