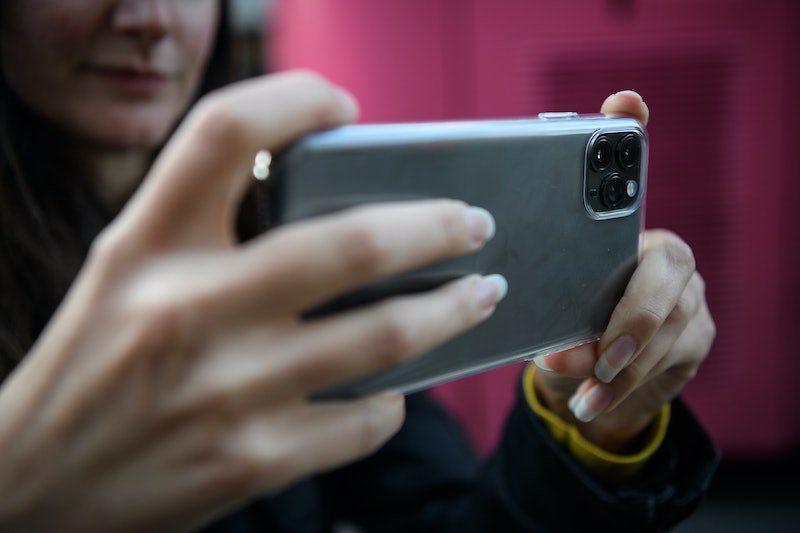 One of the most talked-about new features on the iPhone 11 series is its improved camera functionality. Two of company's newest iPhone models boast a brand new triple-camera system, while another has upgraded dual cameras. In addition to physical camera improvements, though, there are also lots of cool new tools, including something called QuickTake. This iPhone 11 video upgrade lets you switch from taking photos to recording video at a moment's notice — and it feels similar to taking video for an Instagram story when you're in the app.

As Apple emphasized in a Newsroom release, the iPhone 11's camera interface upgrades were designed to make the experience of capturing life's moments more "immersive" and seamless. The QuickTake feature, Apple said, allows you to easily record video while still in photo mode, because sometimes situations suddenly arise where you want to switch from shooting stills to capturing video. To make the change, you simply hold down the shutter button, which will then allow you to begin recording — just like in Instagram stories. To stop the recoding, you just release the shutter button, Apple indicated.

Moreover, as MacWorld described, you can also lock the shutter in QuickTake mode by swiping the shutter button to the right, so you can opt to keep recording video without holding your finger on the button. Additionally, MacWorld said, if you swipe left on the shutter button, you can still take photos in Burst mode, which is what normally happens when you hold down the shutter button on older iPhone models. The video below explains the process about 15 seconds in.

In addition to QuickTake, there's also a lot of other fun new camera shooting features arriving with the iPhone 11 series. For example, Apple's new Night mode is designed to significantly improve your phone's ability to capture photos in low-light settings, the company says. Night mode "turns on automatically for low‑light photos like you’ve never seen," the company notes on its website. "There’s no need for flash, colors are more natural, and photos are brighter."

Additionally, the iPhone 11 series allows users to capture slow-motion selfies on their phones — something which Apple deemed the "slofie" during its Sept. 10 launch event. While, according to Mashable, people seem conflicted about the usefulness of this feature, it nonetheless adds another option for photo and video creativity to the iPhone user's repertoire.

And, of course, all three iPhones have vastly improved cameras. The iPhone 11, which is considered a successor to the iPhone XR, has dual 12MP ultra wide and wide cameras, compared to the XR's single 12MP wide camera, per Apple's technical specifications. The iPhone 11 Pro and Pro Max models each have first-of-its-kind triple 12MP ultra wide, wide, and telephoto cameras, Apple says, representing a step up from the dual cameras of 2018's iPhone XS and XS Max.

According to Apple's website, this new feature represents the "first triple‑camera system to combine cutting‑edge technology with the legendary simplicity of iPhone." The company emphasizes that, with the triple camera, users can "capture up to four times more scene" when shooting photos.

Clearly, Apple has made photo and video improvements a key focus of its newest iPhone series. If you're looking for an enhanced and more versatile camera experience, one of the iPhone 11 models might be a good fit for you.