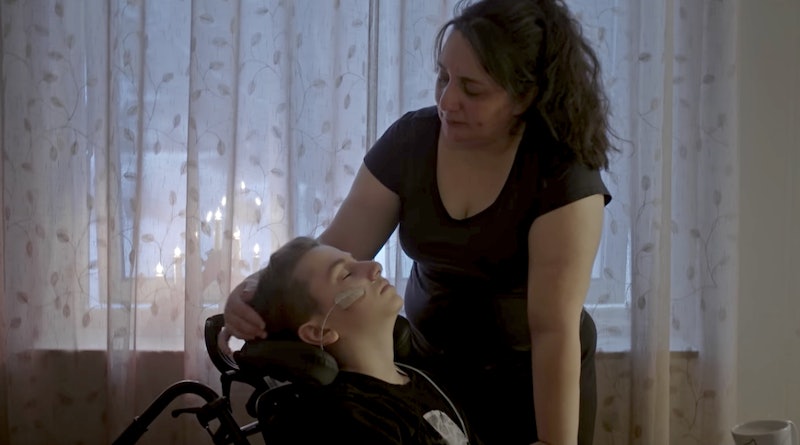 If you've never heard of resignation syndrome, you're not alone. The concept was first developed in Sweden in the mid-1990s, after the children of asylum-seekers began exhibiting strange symptoms. They became catatonic, refusing to eat, talk or move, and often had to be fed via feeding tube — and their condition could persist for years. A new Netflix documentary, Life Overtakes Me looks at three families coping with resignation syndrome, and it's providing new insights into the psychological trauma of being a child refugee.

Resignation syndrome appears to be a very specialized response to the trauma of refugee limbo, in which families, many of whom have escaped dangerous circumstances in their home countries, wait to be granted legal permission to stay in their new country, often undergoing numerous refusals and appeals over a period of years.

"Typically a depressive onset is followed by gradual withdrawal progressing via stupor into a state that prompts tube feeding and is characterized by failure to respond even to painful stimuli," a study of the phenomenon in Frontiers In Behavioral Neuroscience found in 2016. "The patient is seemingly unconscious. Recovery ensues within months to years and is claimed to be dependent on the restoration of hope to the family."

Professor Louise Newman A.M., who is director of the Centre for Women's Mental Health, Royal Women's Hospital Melbourne and Professor of Psychiatry at University of Melbourne, is an expert on resignation syndrome. She tells Bustle that it develops "as a response to situations of extreme stress and trauma where children feel powerless and essentially withdraw into a state like hibernation in severe cases. Some become comatose and unresponsive."

Resignation syndrome has been diagnosed in refugee communities outside of Sweden, too. In Australia's offshore detention center for asylum-seekers on the island of Nauru, which has notoriously harsh conditions, the Economist reports that "traumatic withdrawal syndrome" has been seen among some child detainees.

Dr. Elisabeth Hultcrantz has treated over 40 children with resignation syndrome, including Sophie, who displayed symptoms after her parents were told they were being deported from Sweden. “When I explain to the parents what has happened, I tell them the world has been so terrible that Sophie has gone into herself and disconnected the conscious part of her brain. I think it is a form of protection, this coma they are in," she told Doctors Of The World.

The diagnosis itself has been controversial; the BBC reported in 2017 that that the Swedish children had been accused of "faking it," and that their parents were suspected poisoning them, though "none of these stories were proven," the BBC clarifies. Professor Newman tells Bustle that the issue of asylum-seekers in Australia has been "highly politicized," and there have been "accusations that the condition is merely attention-seeking or manipulation. Clinicians reject this."

In 2006, a government-commissioned report on the condition in Sweden found that it was "a culture-bound syndrome, a psychological illness endemic to a specific society," according to a report in The New Yorker in 2017. Some experts think that children with resignation syndrome in Sweden and Australia are using the cultural cues around them to express their psychological distress, in the only way they know how.

Though it may sound similar to post-traumatic stress syndrome, experts believe that the two are different diagnoses. In a presentation in London in 2017, Hultcrantz explained that the children she'd treated with resignation syndrome had all witnessed trauma to family members. "All children have such a previous trauma from their home country and many have developed PTSD. The acute threat of deportation back to the place of the trauma re-activates their unbearable fear and stress and causes the catatonia-like condition."

"It is different from PTSD in that PTSD, whilst [also] a response to trauma, does not include the element of severe withdrawal, muteness and failure to eat," Professor Newman tells Bustle. "The PTSD patient is stuck with reliving trauma, while in resignation syndrome, the person escapes it by withdrawal of awareness."

Resignation syndrome might be part of a spectrum of different traumatic responses to instability and distress. Similar behaviors were also observed during the Holocaust; in his Frontiers article, Karl Sallin describes the phenomenon of the "muselmann" in Nazi concentration camps, in which people without hope began refusing food and entered a catatonic state. Resignation syndrome might be a new name and cultural variation for a very old idea.

Professor Newman says that the first step for treatment of resignation syndrome is "removing the child to a safe environment and providing medical care. Some of the Nauru children were very unwell with complications of coma." Helping children with resignation syndrome, she says, "can take up to 12 months. The ongoing treatment involves promoting a sense of safety and supporting a process of "waking up" and engaging in trauma therapy." And helping the child's family is a key element of the treatment: "Resolution of the family's asylum issues and residence is a component."

The UNHR says that there are around 24.5 million refugees and 3.1 asylum-seekers worldwide in 2019, displaced from their homes by war, disaster or persecution. Of that number, UNICEF estimates that around 46% are children. The traumas of refugee life are legion, and experts believe that resignation syndrome in children — the most vulnerable figures in an already-vulnerable population — is their quiet attempt to survive.