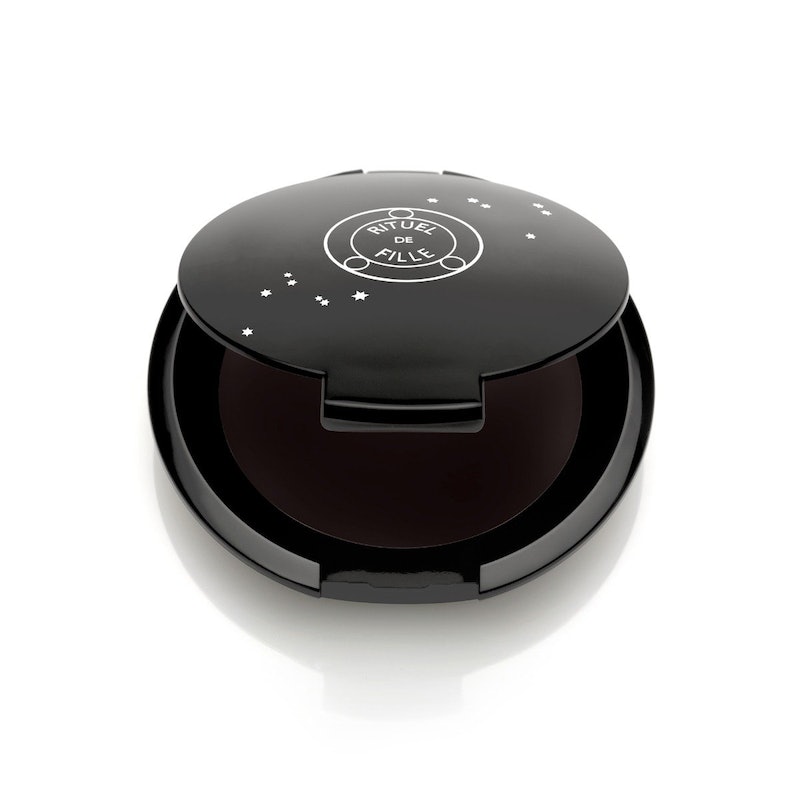 At this point, a highlighter would have to be truly absurd to shock anyone on the beauty web. We've seen blue, we've seen green, we've seen everything — except black. But now the jig is now up. Coming from naturals brand Rituel de Fille, their new inky black cream pigment has popped up all over the internet as both a "black highlighter" and "antihighlighter." So what is Rituel de Fille's Eclipse Inner Glow Crème Pigment? While a concentrated black in the pan, it reads as a buildable eggplant, multi-use pigment that does what you want. If that includes rebelling and ~going there~ with a highlight, now's your time to shine — but it isn't just a highlighter, necessarily.

While some outlets have pounced to proclaim the pigment a black highlighter, the brand itself describes the product as a "black blush, contour, cream eye shadow and lipstick in one remarkable shade. Worn sheer, Eclipse appears as a subtle aubergine, lending a cool-toned tint to the cheeks, lips or eyes. But the shadows deepen in a bolder application, with the color building up to a rich, dimensional black."

While Jeffree Star Cosmetics released a black highlighter in Oct. 2016, Rituel de Fille's product is all-purpose, according to the brand's description on the site. This means that it's pretty much whatever you want it to be, from a contour to an eyeshadow. This aspect of the product makes it particularly unique.

So not exactly a highlight — reach for the brand's excellent Rare Light Luminizers if you want gleam in the traditional sense. Instead, this is more a dewy, dark tint that can also pull double duty to darken lipsticks and add depth to eye shadow. Think a hybrid of the Estee Edit's black Lip Flip Shade Transformer and Smashbox's smoky lid primer.

Which is cool in its own right, even if you're not into the "I highlighted with darkness" look (although potential inspo: Orphan Annie, Tiny Tim, and Koffing the Pokemon). The pigment is available for pre-order as of now on Rituel de Fille's website, in advance of the April 5 launch.

Also of note: The swatch looks like you've just watched the video from "The Ring" and should prepare to die. An ironic twist for a product that could breathe new life into your stash, darkening hues for spring (like the counterculture would want).

The brand writes that, "In a brief moment of occultation, the sky blackens. In this strange and extraordinary moment, the sun turns to darkness. The eclipse is nature’s most dramatic expression of shadow, and we have captured its beauty in our newest creation." So, damn. Now's the time to look like a solar phenomenon. Pair it with some temperature-changing hair dye, and you've got yourself a full "Craft" look.