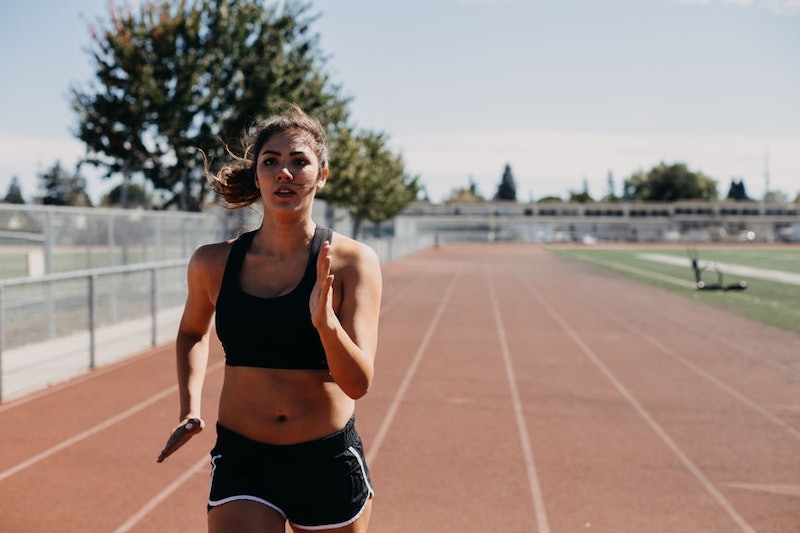 Most boob owners will be closely familiar with the twinge: the ache that occurs when you run up the stairs, or jump off a kerb, or even launch yourself out of bed a bit too vigorously, and your chest plummets like an anchor on a very short chain. And the twinge can intensify to an agonising degree, despite the best efforts of your sports bra, when you're running, a malady that's been termed "runner's boob." So what is runner's boob? According to the Guardian, it's the painful result of the very specific way breasts move when they're not properly supported during exercise — and GPs say it's on the rise.

Here's the deal: your boobs, as the Guardian explains, are made solely of fatty tissue, connected by ligaments to the torso. These "Cooper's ligaments," the NHS explains, are "thin, paper-like tissues that weave throughout the breast and attach to the chest wall." Not exactly supportive, in short. There's not a scrap of muscle in there, so they move when you move: up, down, left, right, and every direction in between. And we're not talking just a little jiggle: according to researchers at the University of Portsmouth's Research Group in Breast Health, they can move from 4cm while walking to an alarming 15cm while running.

The result? Pain (or "mastalgia," if we're being scientific). As the Times reports, a 2014 study from the University of Portsmouth research group found that of 1,397 women training for the London marathon, 32 per cent experienced breast pain — and some even had to take painkillers to alleviate it. Biomechanics professor Joanna Wakefield-Scurr, head of the research group, told the newspaper, "Almost one fifth of women we questioned had altered their training as a result of their breast pain."

Runner's boob has a direct impact on the relationship between people with breasts and physical exercise. A survey by the University of Portsmouth research group found that breasts were one of the biggest barriers to exercise for women (though it's important to note that not all those with breasts are women, and not all women have breasts). They came fourth after insufficient motivation, a lack of time, and ill health.

What's more, as the Guardian reports, the research group found that 46 per cent of schoolgirls were reluctant to take part in sport because of their breasts, though only 10% reported wearing a sports bra on a regular basis. Little wonder, then, that only 56 per cent of girls surveyed by Women in Sport last year said they enjoyed taking part in PE.

But runner's boob needn't prevent people with breasts from running, or engaging in other physical activity. Spot the solution hidden in the previous paragraph? The answer, friends, is a top-notch sports bra. A crop top will not suffice, the Guardian says. Instead, runners should seek out a high-impact sports bra that fits perfectly (though, as the newspaper observes, some can be prohibitively expensive, especially for those with larger breasts).

The NHS goes into a little more detail about the ideal sports bra, and shoppers should consider taking their guide into the changing room. The underband, cups, shoulder straps, and underwire all need to fit perfectly, while it's worth trying out compression, encapsulation, and combination sports bras to figure out which one suits you best. Compression bras push your breasts against your chest, the NHS explains, while encapsulation bras lift and separate your boobs — and combination bras do a little bit of both.

So runner's boob: a real and painful phenomenon, and not something to be brushed aside. What's just as true, however? Your breasts needn't stop you from running.