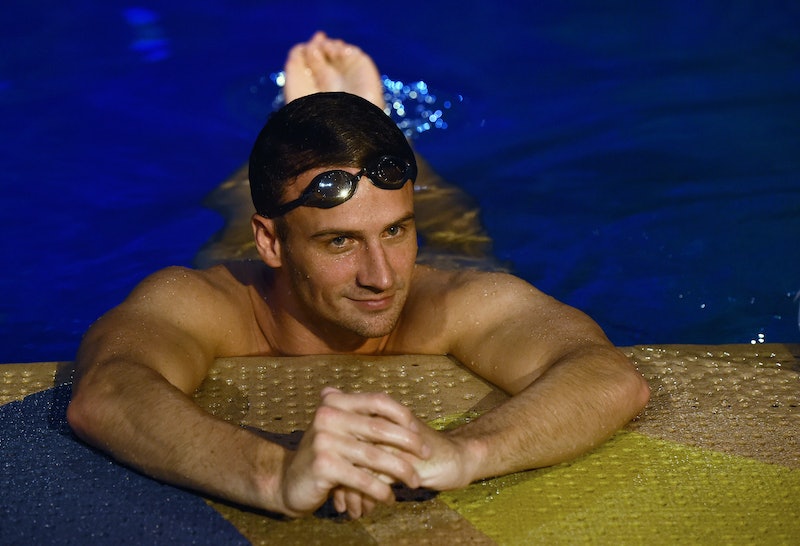 Ryan Lochte is a 12-time Olympic gold medalist, but there's one prize that eludes him yet: winning Celebrity Big Brother. After starring on his own reality show, What Would Ryan Lochte Do?, in 2013 and competing on Dancing With The Stars in 2016, the swimmer is heading back to the reality TV arena for the second season of CBB. But since it's been a few years since he's been on-screen, you might be curious what Ryan Lochte is doing in 2019. And, like most of us, he's had quite a few ups and downs.

According to ESPN, Lochte is suspended from swimming competitively until July 2019. This is because, per Time, he posted a since-deleted Instagram photo of him receiving an intravenous injection in May 2018. IV injections are prohibited under anti-doping rules, as ESPN reported, thus earning Lochte a 14-month ban from the U.S. Anti-Doping Agency. According to USA Today, the incident also caused him to lose a number of endorsement deals.

On the plus side, however, he now has time to participate in Celebrity Big Brother, which is basically the celebrity reality show version of sleepaway camp — except with a major cash prize. But Lochte has also been finding plenty of other ways to fill his time now that he's out of the pool until July.

He Had A Wedding

E! News reported that Lochte and his wife Kayla Rae Reid got married in January 2018, but tied the knot at a courthouse without much spectacle. In September, however, the two gave themselves the big wedding they had been waiting for because, as Reid told People, they "wanted [their son] Caiden to be old enough to walk down the aisle."

He may not be swimming competitively, but for a professional swimmer like Lochte, there's no such thing as a week off. His Instagram is filled with shots of him training, and he seems to be preparing to re-enter the competitive field later this year without skipping a beat.

Reid gave birth to her and Lochte's son, Caiden Zane Lochte, in 2017, and the two have spent 2018 parenting their young child. Now, 2019 could mark one of Lochte's hardest challenges as a dad so far: being away from his infant son for what could be a few weeks, depending on how far he goes on Big Brother.

Lochte has excelled at athletics for most of his life (he went to the Junior Olympics when he was just 14), but Big Brother provides a completely different challenge — the biggest obstacle of which is that he will find himself completely removed from his usual daily routine and have to spend the duration of CBB away from his wife, his child, and the inability to practice in a proper swimming pool. It may be a lot, but if he loses Big Brother, he does have a literal pile of gold medals to comfort him.