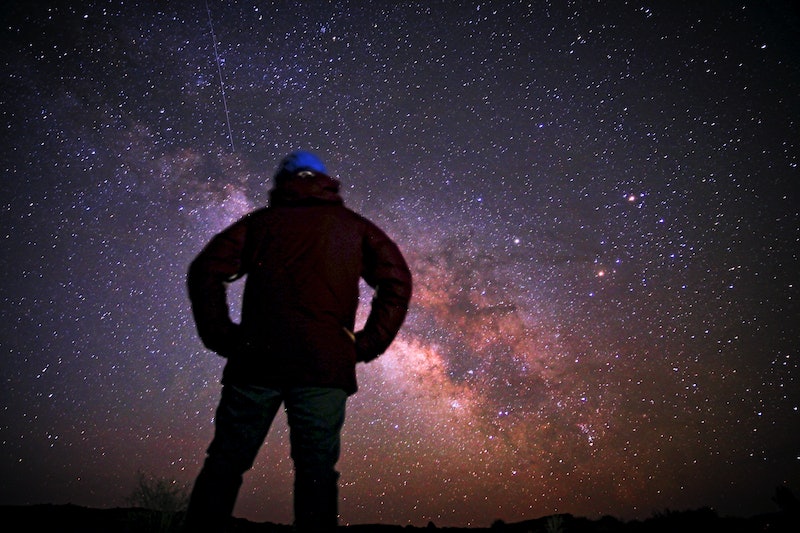 You probably have heard of Saturn Retrograde in two different scenarios: with an astronomical explanation, or an astrological one. Or, maybe you haven’t heard of it all and you’re curious to know if Saturn really does move backwards a few months throughout the year. So, let me just get that out of the way now: No, it does not move backwards. So what does Saturn Retrograde mean, and why do people think it moves backwards?

So here’s what goes down: Since all of the planets are part of a circular solar system, and some orbits are bigger than others, that means the amount of time a planet circles the sun looks different compared to the orbit it is on. For Earth, it takes roughly 365 days to fully go around the sun. However, that time frame looks different for Venus, which takes 225 “Earth” days, and Saturn, which takes 11,000 “Earth” days.

While Saturn is taking it’s sweet time, because of, you know, distance of it's orbit and all, that means that Earth can easily catch up. That “catch up” point, when Saturn and Earth are parallel, is the start of Saturn Retrograde. Earth keeps moving along after that point, and since it is now passing Saturn, it gives the optical illusion that Saturn is moving backwards. But it isn’t! It’s still moving the same direction, but at a slower pace. It just looks like it’s moving backwards from Apr. 6 until August when it is out of sight. At that point, Earth and Saturn moves back from retrograde to prograde.

Now, what about astrology? Well, there are tons of astrologists with theories on the Saturn Retrograde and how it relates to one’s life. I think my favorite of them all has to do with the fact that Saturn is known as the “karma planet,” and the “reverse” movement can correlate with karma. This particular explanation on Tarot.com says that, when Saturn is being less direct and moving backwards, it gives humans the chance to let our rich internal world take a back seat and look towards ourselves, the boundaries that hold us, and free play.

According to AstrologyKing.com, since Saturn is known as the Lord of Karma, that means the retrograde is time for karma to play out. For those who receive good, or bad karma, things will come to justice during the Retrograde.

So here’s what we can learn from this: Work out your grievances with another, make right with those you have hurt. Because come Apr. 6, 2017, things may not work out in your favor...