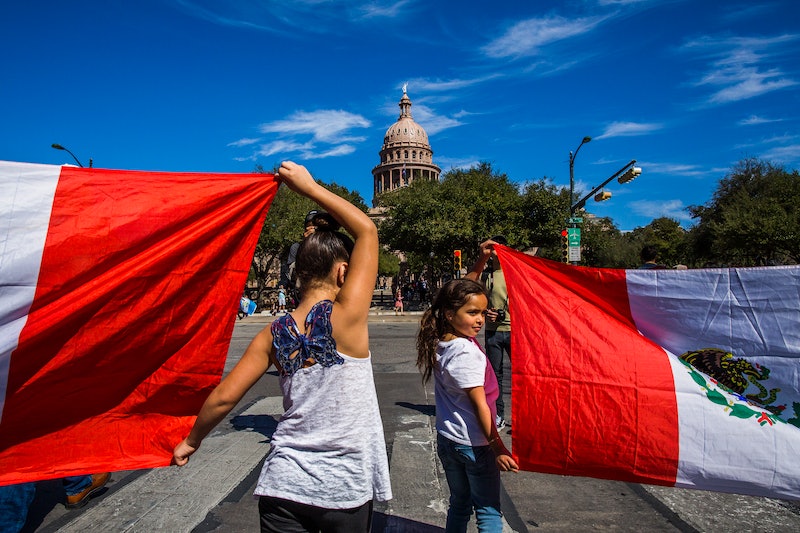 News emerged on Wednesday evening that one of the country's most stringent immigration laws hasn't passed its first test of constitutionality. A federal judge has temporarily blocked SB4, Texas' sanctuary city ban, from completely going into effect.

The state law would have allowed the state to significantly fine local government and law enforcement officials who refused to follow immigration laws or detention requests, limiting the ability of so-called sanctuary cities of offering any sanctuary for undocumented immigrants. It also would have allowed police officers to question anyone they stopped about their immigration status, even if the person was stopped for an unrelated reason such as a traffic violation.

The judge who blocked SB4 said in a statement that letting it go into effect would have "[eroded] public trust and [made] many communities less safe." He blocked the provision allowing local law enforcement to question people they suspected to be illegal immigrants without any reason and then detain them if they were unable to produce papers, but he didn't totally stop the bill from going into effect. As it stands right now, law enforcement officials can question people who they believe to be undocumented, but they cannot act on that knowledge if the person does turn out to be an illegal immigrant.

The fight over this bill will continue in court, as Texas Gov. Greg Abbott has already promised to appeal it. "Today's decision makes Texas' communities less safe," Abbott said in a statement reported by CNN. "Because of this ruling, gang members and dangerous criminals ... will be set free to prey upon our communities."

Critics of the bill, on the other hand, are happy with this initial result but are aware that it's only the beginning. Its detractors include many local officials those in law enforcement who worried about the divide it would have created between vulnerable people and the authorities. When the bill was being debated in the spring, local officials from across Texas testified in the state legislature, asking them not to pass the bill. The Republican-controlled legislature, determined to press forward, ignored the testimony of the 627 members of the law enforcement community out of 638 who asked them not to pass SB4.

One group currently celebrating is the Texas chapter of the ACLU, which released a travel warning for Texas after SB4 was originally passed in May. "The court was right to strike down virtually all of this patently unconstitutional law," said Lee Gelernt, deputy director of the ACLU’s Immigrants’ Rights Project, who challenged the bill in court. "Senate Bill 4 would have led to rampant discrimination and made communities less safe. That's why police chiefs and mayors themselves were among its harshest critics -- they recognized it would harm, not help, their communities."