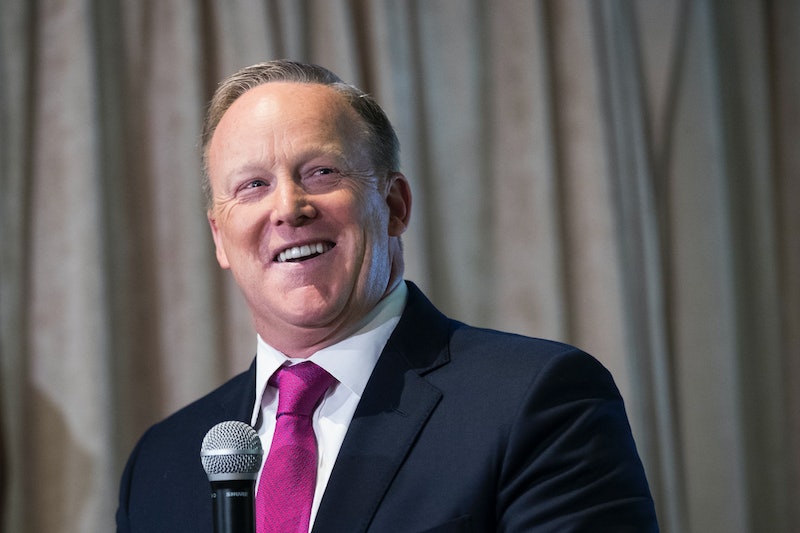 It looks like Trump's former press secretary can't keep away from the White House. According to reports, Sean Spicer's new job at a pro-Trump PAC, the America First Action group, will entail a senior spokesperson and adviser position, which is not too different from his previous White House role.

According to the America First Action website, the PAC is "dedicated to electing federal candidates who support the agenda of the Trump-Pence administration."

Although it would be illegal for America First Action to collaborate directly with the Trump administration, it can receive donations and funding to support candidates who align with Trump and his various views on domestic and foreign policies. The president himself is expected to speak at the group's fundraiser in mid-June.

Spicer, who stepped down as White House press secretary in the summer of 2017, released a statement on his new position at America First Action:

I am honored to join a team whose mission is to help fulfill the President’s promises to the American people, while helping elect officials who will do the same.

Spicer's new colleagues seem thrilled at his arrival as well. The president of the America First Action, Brian Walsh, said in a statement, "Only a select few will ever fully understand the pressure, privilege, and responsibility that come with standing at the Presidential press podium. Sean’s unparalleled political experience, communications savvy, and strong commitment to this administration’s agenda make him an invaluable addition to our organization."

For Spicer, it's a professional move that isn't exactly new, as far as the role goes. Before he was the White House press secretary, Spicer was the communications director for the Republican National Committee. So it's more like a seamless development for Spicer who, during his time as the White House press secretary, said many controversial statements.

While giving an interview to HLN in January, Spicer admitted to "screwing up" while on the job. He was talking about the backlash after he said, while criticizing Syrian leader Bashar Assad, that Adolf Hitler "didn't even sink to using chemical weapons."

Spicer admitted to HLN, "I screwed that up royally."

He added, "I'm a very self-critical person, and I sat back and said, 'You know, it's not my credibility.' I honestly went out every day to do the best job I could for the President of the United States, who gave me an unbelievable honor."

In a recent Rolling Stone interview, he got frank with the publication and described some of his time while representing Trump's White House as "lonely." He also said that while he missed his former colleagues, he had zero intention of going back to being the White House press secretary. "I miss the people tremendously," Spicer said, "but it is an unbelievably intense and lonely job."

In his Rolling Stone interview, Spicer reiterated the same remorse he expressed on HLN. In fact, he appeared much more forceful about his contrition when asked if he regretted some of his remarks as press secretary, at one point exclaiming, "Oh, f*ck yeah! Absolutely!"

Over the past few months, Spicer has opened up about discussing his old job, his mistakes, and the pressure he felt while standing at the podium. But the ex-White House press secretary will get even deeper into it all in his book titled The Briefing: Politics, The Press, and The President, which is supposed to come out in July.

In the meantime, those curious about what happens in Spicer's life should probably keep an eye on his role at America First Action.