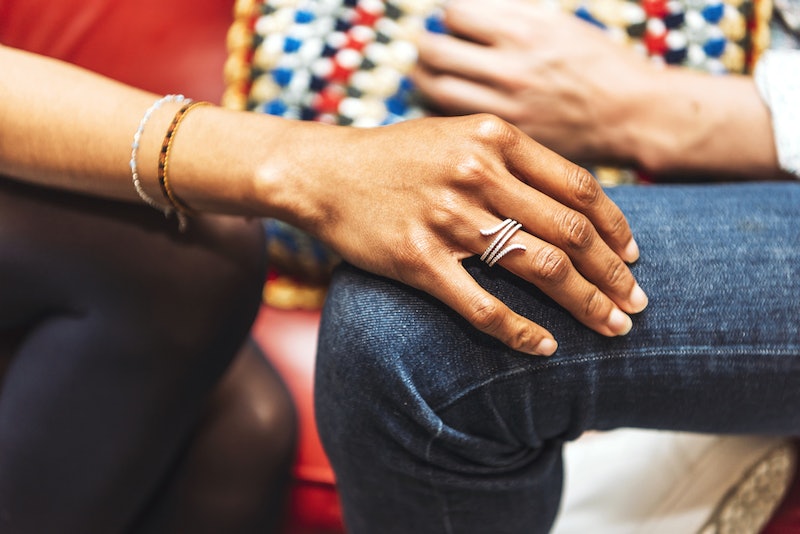 Peer pressure is familiar to us because of after-school specials; it's the process by which your friends pressure you to change something about yourself to fit in. Typically, we think of peer pressure as related to drinking, and it doesn't stop when we leave high school; many age groups are vulnerable to peer pressure, including millennials. However, there's another aspect to the psychology of peer pressure that has earned less attention: the idea of self-peer pressure, or how your perceptions of the opinions and behavior of others influence your behavior, even if people aren't pressuring you to do anything.

The core values of self-peer pressure and peer pressure are the same: the appeal of fitting in. Conformity, according to a definition by social psychologists Breckler, Olson and Wiggins quoted by VeryWell Mind, "refers to any change in behavior caused by another person or group; the individual acted in some way because of influence from others." While peer pressure involves the explicit or indirect actions of others in attempting to convince you to change your ways, self-peer pressure involves imagining the judgement of others if you don't — like imagining that people won't hang out with you if you don't drink.

If you've ever had a drink while out because 'everybody else is doing it', or gone to a work event or a social occasion because of fear of being ostracized — even if there's no pressure from anybody in your social circle to do so — you're experiencing self-peer pressure.

Research reported by the Association of Psychological Science indicates that conformity is hard-wired into our brains. When people agree with us, we experience more activity in the reward centers of our brains. Being part of the majority, literally, feels good. Famous studies in 1955 found that the vast majority of people would give an answer they knew to be wrong if they saw that everybody before them had answered incorrectly too; they valued being like everybody else over being right.

Fitting in is the flip side of another powerful psychological motivator: rejection. Humans hate rejection in all its forms, but social rejection is a particularly powerful and nasty feeling; research has found that it causes similar brain responses to physical pain, and enduring and surviving feelings of rejection can be incredibly difficult. This is unsurprising from an evolutionary perspective, as humans evolved to be social animals, and rejection from the group often spelled death. "Just like physical pain, the pain of rejection evolved as a signal of threat to our lives," mental health researcher Elitsa Dermendzhiyska wrote for Aeon in 2019. To conform means, to our brains, to stay safe; to be independent is a lot riskier.

Interestingly, it seems your avoidance of rejection might also be in your brain structure. In the study reported by the Association of Psychological Science, people who had more developed lateral orbitofrontal cortices, which assess arguments, were more likely to change their ideas when they saw they might be in conflict with others.

Self-peer pressure takes these twin motivating forces — conformity and rejection — and adds another element: perception of the thoughts of others. You begin to imagine what's going on in other people's heads, or develop a theory of mind', when you're a child. Self-peer pressure means imagining the thoughts of your peers — and their judgements on our actions — and changing your behavior in response to those thoughts. People with social anxiety are particularly prone to imagining the negative judgements of others in social situations; social anxiety itself, explains the Anxiety & Depression Association of America, is based around "intense anxiety or fear of being judged, negatively evaluated, or rejected in a social or performance situation". That judgement may not actually exist, but people with social anxiety believe very strongly that it may do so.

However, even people without social anxiety disorder can create peer pressure internally without the input of others. Changing your behavior based on your expectations of the judgement of others is pretty common, but it can be damaging if it's leading you to do things you really don't believe in. Next time you feel a creeping feeling that other people are going to judge you, try to separate yourself from the thought and examine the evidence. Have these people ever judged you or other people before? Have others done the same thing you'd like to do, like not drinking at a social event, and how did your friends react? And how much does that reaction really matter to you? Write it down to help you think, if that's the way you process things.

It's possible the pressure is coming from you, not them — and thinking about the evidence calmly might make it easier to avoid making yourself do something you'd rather not do.

More like this
The UK Abortion Laws In 2022, Explained
By Sophie McEvoy
6 Abortion Advocates To Follow On TikTok
By Sara Youngblood Gregory
How To Protect Your Digital Privacy If You Need An Abortion Post-Roe
By Kaitlyn Wylde
The Best Summer Workout Gear Of 2022
By Carolyn Steber
Get Even More From Bustle — Sign Up For The Newsletter