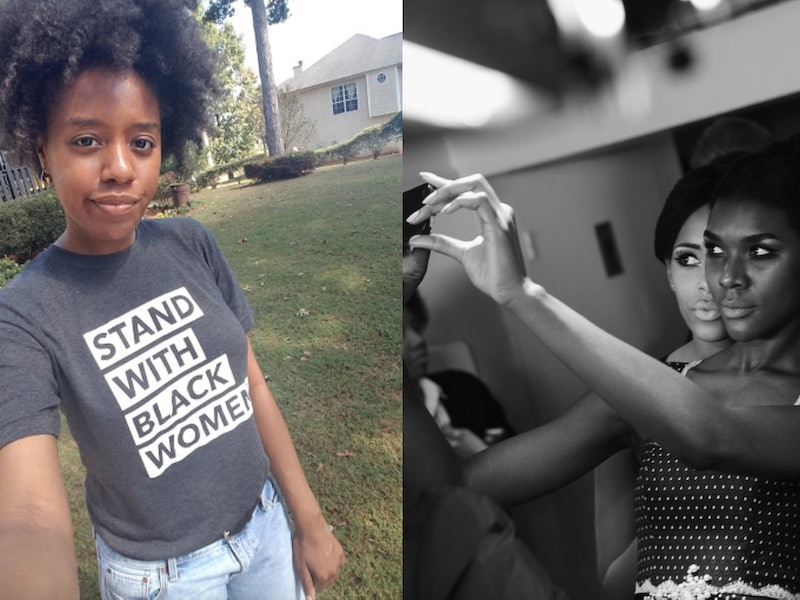 Do you make sure to snap a selfie when you’re at an event, hanging out with friends, or just looking cute in general? I know I do, but some psychologists believe taking multiple selfies a day is an actual disorder that needs to be treated. A new study called taking excessive amounts of selfies a "mental disorder," but some experts disagree that "Selfitis," as they called it, is a thing. The researchers, from Nottingham Trent University and Thiagarajar School of Management, interviewed college students in India about how they felt about their selfie-taking behaviors, and claimed to have come up with a "Selfitis Behavior Scale" that measured the "alleged levels" of "Selfitis."

Dr. Joy, a psychologist and creator of Therapy for Black Girls, says that the study's findings are "concerning."

"It takes more than one study done by a couple of researchers to have something considered an actual mental disorder,” Dr. Joy tells Bustle. Additionally, for something to be a "mental disorder, there is typically the requirement that the behavior causes an impairment in major areas of one’s life. I’m not seeing that described" by the study.

"Selfitis" was actually a term first coined as a hoax. The Adobo Chronicles published a story in 2014 claiming that “the American Psychiatric Association (APA) has officially confirmed what many people thought all along: taking ‘selfies’ is a mental disorder.” This was not (and still is not) true; the APA’s website clearly states “no, Selfitis is not in the DSM-5 (the Diagnostic and Statistical Manual of Mental Disorders), but there are plenty of real mental disorders that need and deserve treatment.”

Despite Selfitis not being recognized by the APA as a real mental health disorder, the idea prompted the researchers to explore the possibility that obsessive selfie-taking could be a disorder. “Whilst the story was revealed to be a hoax, it didn’t mean that the condition of Selfitis didn’t exist. We have now appeared to confirm its existence and developed the world’s first Selfitis Behaviour Scale to assess the condition,” Dr. Mark Griffiths, professor of Behavioural Addiction in Nottingham Trent University’s Psychology Department told The Telegraph.

The researchers evaluated the subjects' responses to questions like, “I feel more popular when I post my selfies on social media.” or “When I don’t take selfies, I feel detached from my peer group.” If they identified with those statements, the team would place them on the behavior scale. The scale ranges from borderline — taking selfies three times a day without posting them — to chronic — an "uncontrollable urge" to take selfies constantly and post to social media six times a day or more. In the middle, "acute selfitis" is described as taking at least three selfies a day and posting each of them.

Dr. Janarthanan Balakrishnan, a research associate from Nottingham Trent’s Department of Psychology, told The Telegraph: “Typically, those with the condition suffer from a lack of self-confidence and are seeking to ‘fit in’ with those around them, and may display symptoms similar to other potentially addictive behaviors.”

Poppy Jamie, a board member of the Resnick Neuropsychiatric Hospital at UCLA and co-founder of Pop & Suki, questions the efficacy of this study, but still warns against the negative effects of posting manipulated selfies that create a “warped impression” of reality.

“Every human has little blemishes and that’s what makes us beautiful, the fact that none of us are perfect. So I think people in the public or just anyone on Instagram should be concerned about how truthful they are being in their selfie uploads,” she tells Bustle.

She also cited the potential mental health benefits of receiving validation from a selfie. "When we receive “likes," it sparks a release of dopamine [...] as if someone is giving us a virtual pat on the back," she says. But at the same time, it isn't ideal to rely on this kind of external validation for self-esteem. "It’s important to think about how you can do this in moderation. Selfies can be both beneficial and detrimental."

It seems like all non-millennials likes to pathologize activities that millennials enjoy, from snapping a selfie and posting it on the ‘gram to eating avocado toast. Even the APA has had enough of folks pathologizing taking pictures of themselves. In 2015, the organization wrote a blog and hosted a symposium entitled, “Stop pathologizing the selfie trend.” Psychologist Pamela Rutledge, PhD, argued that selfies aren’t signs of narcissism and can actually be used to improve mental health when people take pictures of themselves during moments of gratitude, courage, and achievement. “Selfies are an extraordinary documentation of the process of life,” Rutledge told symposium attendees.

So if you enjoy taking pictures of yourself, keep up the selftastic work. Documenting memories and sharing them on social media doesn’t mean you have a mental disorder — no matter what this study says.