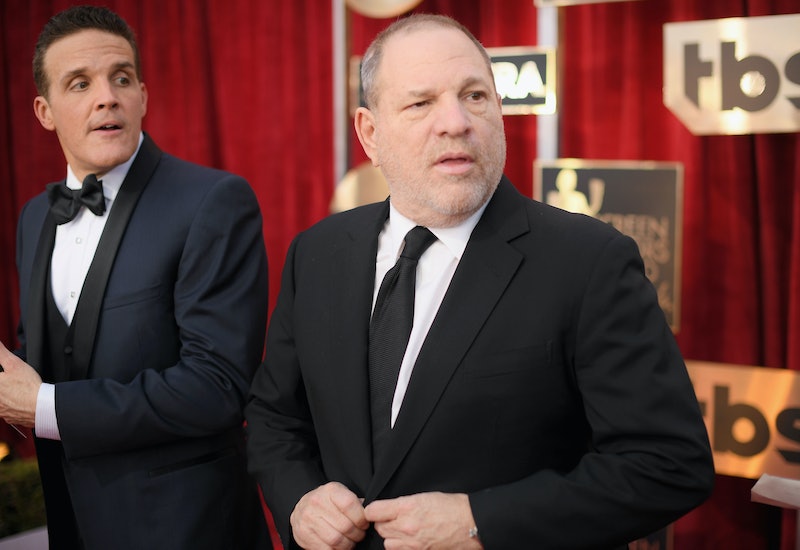 Hollywood mega-producer Harvey Weinstein has been accused of a series of heinous sexual acts, including trying to trade sex for boosting women's careers, exposing himself to unwilling women, and even rape. (A spokesperson for Weinstein denies accusations of nonconsensual sex.) Notable Hollywood stars such as Rose McGowan, Ashley Judd, Asia Argento, and Gwyneth Paltrow, have come forward, and Weinstein has been fired from the company bearing his name. His wife left him, and Weinstein plans to seek therapy for sexual issues.

Weinstein is certainly not the first celebrity to respond to a sex scandal by announcing that he'd seek sex therapy. After Tiger Woods faced repeated accusations of infidelity, he put his career on hold to attend a rehab facility for sex addiction. And after his own sex scandal cost him his job in Congress, Anthony Weiner sought out rehab — but that didn't stop him from relapsing and sexting an underage girl. Experts Bustle spoke to cautioned that therapy is not a cure-all for sexual impropriety — and there's a stark difference between stopping sex addiction and preventing sex crimes.

In his initial statement to The New York Times, Weinstein referred to his behavior as his "demons" and spoke about recovering through tutorship and therapy:

My journey now will be to learn about myself and conquer my demons. Over the last year I've asked Lisa Bloom to tutor me and she's put together a team of people. I've brought on therapists and I plan to take a leave of absence from my company and to deal with this issue head on.

Lisa Bloom, a prominent civil rights attorney who was instrumental in the sexual harassment lawsuit that ousted Bill O'Reilly, has since abandoned Weinstein, and he has made no formal announcement about what kind of therapy he'd be seeking; only that it would be in Europe.

On Thursday, Bob Weinstein, Harvey's younger brother, said his brother hadn't yet entered a program. “My brother Harvey is obviously a very sick man," Bob Weinstein told NBC. "I’ve urged him to seek immediate professional help because he is in dire need of it. His remorse and apologies to the victims of his abuse are hollow."

What Are The Different Kinds Of Sex Therapy?

While therapy can be helpful in dealing with sexual misconduct, there's a difference between the treatment of hypersexual behavior, when a person is compulsively drawn to sex even when it is destructive, and sex offending, when a person pursues nonconsensual sex, according to Dr. Rory Reid, a research psychologist and assistant professor of psychiatry at UCLA who specializes in sexual and gambling addictions. “Therapy needs to be appropriately matched with a person’s issues,” Dr. Reid tells Bustle, noting that sex offending is typically criminal in nature and violates the rights of others. "Treatment for sex addiction looks different than treatment for sex offending."

Sex offending treatment, Dr. Reid says, focuses more on curbing the behaviors that endanger others, while sex addiction treatment focuses on the patient's internal struggles. "We're going to focus a lot more on victim empathy, and language describing the sexual behavior is different,” Dr. Reid says. Sex offending therapy often applies a firmer approach, focusing on stopping the behavior, protecting society and potential future victims, and accepting legal consequences for sexual offenses. "If someone just goes to a sex addiction facility rather than participating in sex offending treatment if that is what’s needed, their treatment will be incomplete and they will be at a greater risk of reoffending,” Dr. Reid says.

Is Sex Addiction Even Real?

Sex therapy often focuses on sex addiction, which treats sex similarly to gambling or alcohol — something that an addict desires without control or even enjoyment. But the research on sex addiction has not conclusively shown it to manifest similarly to alcoholism or gambling addiction. Dr. Reid was involved with a 2013 study by researchers at UCLA which looked into whether sex addiction leads to changes in the brain like drug addiction does. Drug addicts will often have neurological responses to images of the drug they are addicted to, indicating a change in how an addict's brain reacts to the drug. But people believed to be sex addicts did not have similar reactions to pornography.

"Sex addiction, as we think of it, does not exist as a scientific term."

"Sex addiction, as we think of it, does not exist as a scientific term," Dr. Timothy Fong, the director of the UCLA Addiction Medicine Clinic who was also involved in the 2013 study, tells Bustle. "We really don't have a lot of spectacular science. We have a lot of anecdotes and case theories, but we don't have anything that's tried and true. It's not like we have antibiotics for the soul or chemotherapy for behavior that will actually definitively, for sure make people alter their lives for the better."

But nevertheless, Dr. Fong points to examples of people who have made "profound changes in how they view the world and how they act towards others" as a result of therapy aimed at treating sexual behavior. He argues that a combination between medication, individual therapy, and support groups that has been effective.

Why Victims Of Sexual Misconduct Must Be Heard

According to Rob Weiss, an author and intimacy expert who often treats high-profile sexual disorder patients, treatment for sex offending and addiction must also take into account other psychological problems that often coincide with sexual issues. "Most of the men that I work with who cross the line into compulsive or addictive sexual behavior, or even offending, have fairly narcissistic personality types," Weiss says. "And the people that I treat most often, this really evolves out of early profound trauma, and abuse in childhood." Dr. Fong points out that many abusers actually have a history of experiencing abuse themselves, and therapy must find a way to remove them from the cycle.

According to Weiss, good treatment often has to deal with the specifics of these other issues in addition to looking at the sexual issues themselves. "The defining feature of narcissism in a situation like this is lack of empathy," says Weiss. He continues that this lack of empathy is what often allows sex offenders to seek sexual gratification without concern for how their actions will affect others. "The way I get to work with them is, as we go through their history in detail, and we look at the distortions between their story and reality, if they are just narcissistic, they will break down under the weight of remorse. Narcissists lack empathy, but they can experience remorse."

The biggest impediment to effective treatment, according to Dr. Fong, comes from patients who don't want to stick with the program — people who stop showing up for treatment or taking medication, or "delude themselves into thinking 'there's just a magic pill.'" According to Dr. Fong, while about half of cases of sexual misconduct are episodic, reflecting a specific time period of misbehavior, half are relapsing, and requires long-term treatment to deal with. This is part of what explains why some high-profile perpetrators who see their lives ruined by their behavior (like Anthony Weiner) will end up repeating it even after facing consequences and undergoing treatment. "There's a 50 percent chance that your condition is going to come back throughout the rest of your life," Dr. Fong says. "It's not that it's a lifelong treatment, but it's a life long process of recovery where you have to watch, monitor and check on things. I have some patients who I see once a year."

It's hard to tell how Weinstein will be approaching treatment; his spokesperson said he is "pursuing a better path" and that the disgraced mogul "is hoping that, if he makes enough progress, he will be given a second chance.”

More like this
This Company Will Send STI Tests Right To Your Door
By Lexi Inks
How To Have A Hometown Hookup Without Catching Feelings
By Lexi Inks
The 'Lady Chatterley's Lover' Book Leaves Us With A Troubling Question
By Catharina Cheung
Bustle Newsletter: November 18, 2022
By Bustle Editors
Get Even More From Bustle — Sign Up For The Newsletter